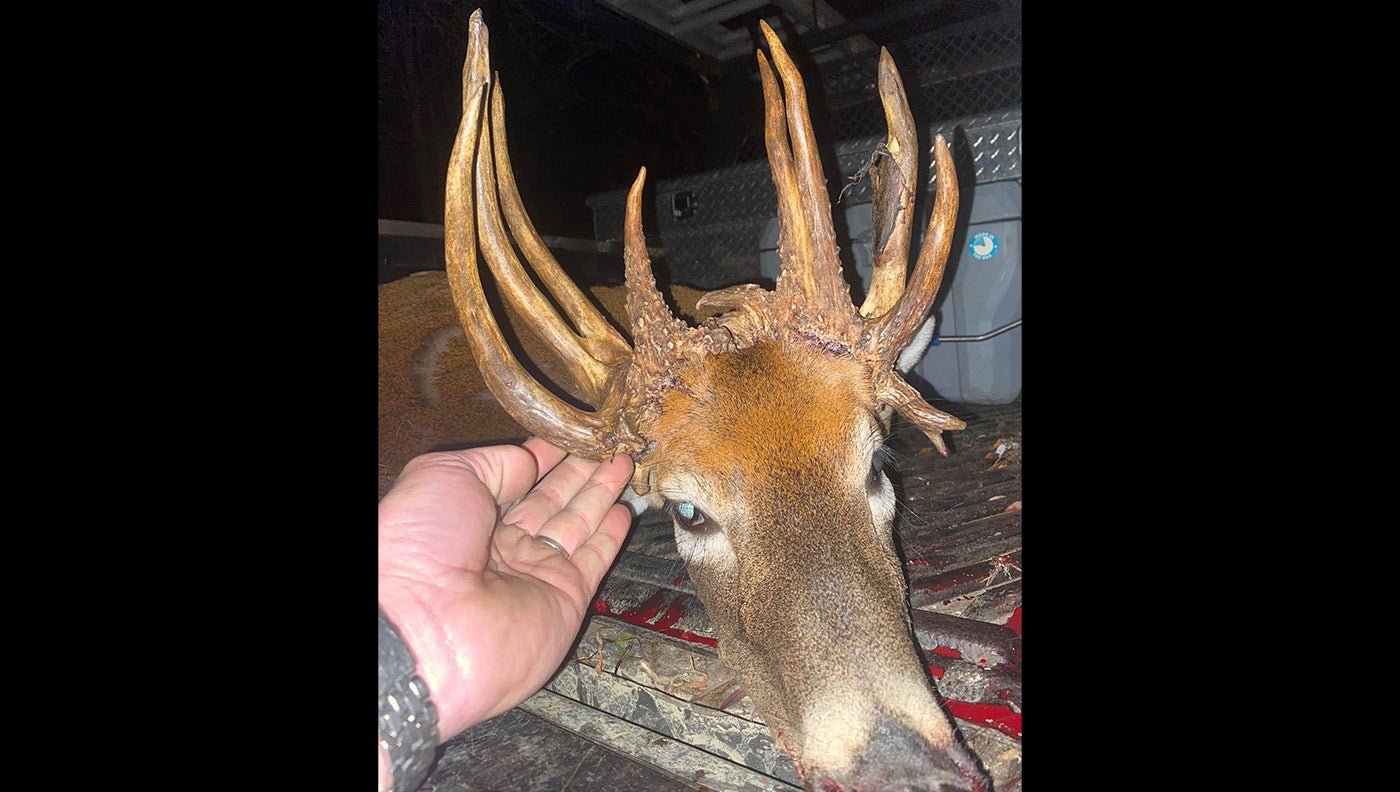 What would you do if you saw a deer with these antlers passing by your stand?. Steven Johnston
SHARE

Steven Johnston knew the antlers of the whitetail deer walking beneath his stand were interesting, but he was about to give the animal a pass until he noticed three tall tines sticking straight up. “My wife Nicole wanted to do something artistic with a skull mount—something she could do a design with,” Johnston says. “I figured this deer might make a good one.”

Perched in a climbing stand 30 feet high in a pine tree, Johnston shouldered his Beretta 12-gauge and dropped the deer at close range. “I climbed down, went to the deer, then stepped back and said, ‘What the hell did I just shoot?’” Johnston tells F&S. The deer had nine tines sticking straight up, including one with dried velvet still attached. Another 11 kickers and stickers jutted from the bases, which were thick, seemingly trying to grow together.

The 46-year-old general contractor from Portsmouth, Virginia, snapped a couple of photos of the deer on the ground and then dragged it to his truck. It wasn’t a long haul. Johnston was hunting on a 5-acre strip of land in Rushmere, Virginia, about a mile from the James River in Isle of Wight County. Though it’s a small property, Johnston says he’s killed a couple of nice wall hangers there in recent years. While lifting his most recent deer into the truck, he received a second, bigger surprise. All he found on the deer’s underside were nipples and female genitalia—there was none of what you would normally find on a buck.

Uncertain of what to do in terms of legally checking the deer in, Johnston called the local conservation police officer, who informed him he still had to use a buck tag. Johnston got emotional sharing that he chose to dedicate this deer—and every deer for the last three years—to the memory of his stepfather, Steve Cohn, the man who taught him to hunt when he was a young boy. Cohn died three years ago. “I’m just a poor boy who lives in Portsmouth and loves to be in the woods. I credit that to him. He was an amazing man,” Johnston says.

After looking at photos of the deer, Lindsay Thomas Jr., chief communications officer of the National Deer Association explains that “there are a number of kind-of-related oddities in antler growth that result when deer, for whatever reason, produce too much or too little testosterone. Bucks born with underdeveloped testicles produce too little testosterone, so they grow antlers that are always in velvet and never go through the annual cycle of hardening and shedding. Hermaphrodite deer are born with the reproductive organs of both sexes and also produce strange antlers. When a doe produces antlers, it’s usually a result of elevated testosterone production. She may be a normal doe in other ways and capable of reproducing.”

Without a closer examination of Johnston’s deer, Thomas says it’s hard to say what exactly is going on, but it appears this antlered doe likely has an abnormally high level of testosterone production due to some kind of internal deformity.

“I have never in my life killed something like this,” Johnston says, noting he plans on having the deer honored with a shoulder mount. “My taxidermist said he’s never seen anything like it in 40 years.”