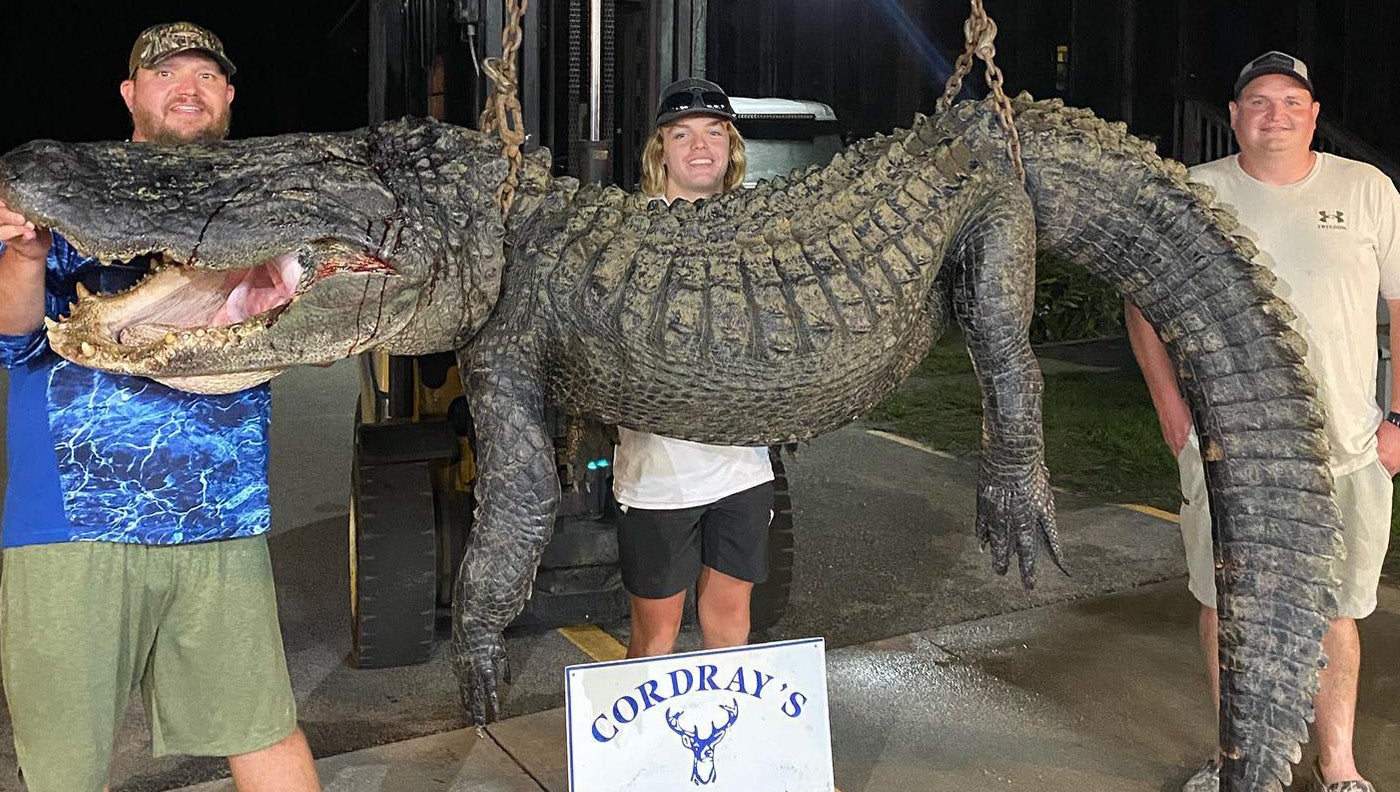 The three men were out on their first-ever gator hunt when they bagged an absolute giant. Cordray's Processing via Facebook.
SHARE

Alligator seasons are in all over the southeastern United States—and South Carolina’s opening weekend was one for the books. At one taxidermy and butcher shop in the Palmetto State’s Lowcountry, as many as 18 gators were checked in on September 10 alone.

Among those was an absolute giant that measured 13 feet long and tipped scales at an eye-popping 625 pounds. The giant gator was pulled from the shallow waters of Lake Marion—110,000 acres of prime alligator habitat just south of the Congaree National Park.

Kenneth Cordray, whose family owns Cordray’s Venison Processing in Ravenel, South Carolina, says the gator was one of the biggest he’s ever dealt with at the shop, where he’s been processing alligators since 2008. “When you get over 500 pounds, and you get to 13 feet…that’s a big alligator,” Cordray told Field & Stream. “We get a lot of 12-footers, and a lot of 100-, 200-, and 300-pounders, but when they get over that mark, it’s rare.”

Cordray says that three alligator hunters— Adam, Noah, and Nick Gilbert—brought the massive lizard into his shop late in the night on Saturday, September 10. “They were out on their first gator hunt ever,” he said. “They saw a big gator, followed the bubbles, and hooked him.”

Read Next: American Hunter Bags “Man-eating Dinosaur of a Croc” in Africa

Successfully harvesting an alligator of that caliber on a first-time outing is no small feat, Cordray said, but the method of take that the three hunters employed made their story even more compelling. “They didn’t harpoon him, and they didn’t shoot him with a bow fishing rig. They just threw out a big treble hook and pulled the thing in,” he said. “That’s pretty impressive.”

Lake Marion is one of three large lakes in South Carolina’s Santee Basin. With its shallow, stumpy water full of big swamps, it is prime alligator habitat that draws scores of hunters every year. In 2010, a gator that weighed 1,025 pounds was taken from Lake Moultrie, the lowest of the three Santee Basin lakes.

That gator was taken by a Massachusetts hunter named Maryellen Mara-Christenson. According to the Charleston Post & Courier, the South Carolina Department of Natural Resources does not maintain an official alligator record book, but Mara-Christenson’s 2010 monster is widely recognized as the biggest gator to ever come out of a South Carolina swamp.