Silhouette Goose Decoys Are All the Rage. Here’s Why and How to Use them

Silhouette goose decoys are hot now because they're lighter than ever, and still relatively cheap. Here's how to get the most from them in the field 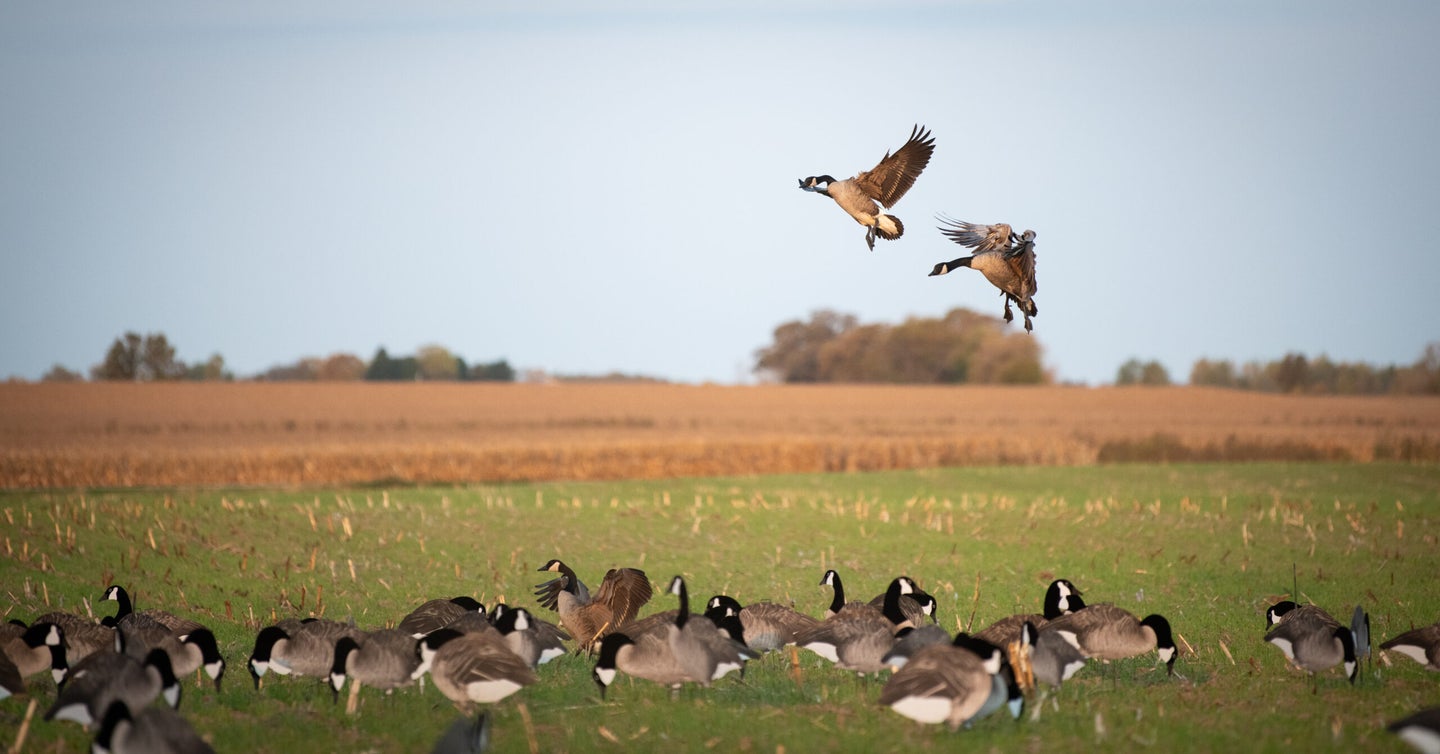 Silhouette goose decoys are a thing right now. If you’re not sure why, this should explain things: A dozen full-body Canada dekes and 18 shells weigh 75 pounds, while three dozen Dive Bomb goose silhouettes in their bag weigh 20 pounds.

Having hauled both loads, plus gun, layout blind, and pack, 3/4 of a mile through the snow, uphill and down, to the same field a week apart last winter (and having made the return trip with 30 pounds of geese on board both times), I am here to tell you that 55 pounds makes a huge difference to someone dragging a Jet sled.

Weight is the main reason for the current silhouette trend, but not the only. Silos have been around forever, and every few years they have another moment of popularity. They’re having one of those moments now, and the new breed of decoys, made of coroplast, the corrugated plastic used for “House for Sale” signs, are the lightest and most convenient to use yet. They’re extremely compact. Five dozen silhouettes fit roughly into the same bag you’d use for six full-bodies.

Silhouettes are comparatively cheap, too, costing as little as $75 a dozen. They are a boon for those of us with small trucks for hauling decoys and small houses in which to store them in, as well as for those who like to hunt over massive 30-dozen decoy spreads with 15 or so of their closest friends.

They have other advantages, too. Snow doesn’t stick on the backs of silhouette decoys because they don’t have backs. And picking up silhouettes versus picking and bagging full-bodies is no contest. Silhouettes win the race in a walk. It’s like the difference between picking up Texas-rig decoys and picking up old-fashioned head-wrapped blocks. If you hunt by yourself and dislike picking up in the cold and the dark as much as I do, silhouettes are for you.

If you’re thinking about jumping on board the silhouette train this fall, here’s are six things I’ve learned that you should know.

Seen from six or twelve o’clock, two-dimensional decoys disappear. To counteract that effect, you need to set your skinnies at differing angles. No matter what, some of your decoys will always be head- or tail-on to incoming geese. Hence, you need to set more silhouettes than you would full-bodies. I’ve had hunters tell me it takes two silhouettes to equal one full-body, but I think it’s closer to three equals two.

That said, I’ve shot birds over spreads as small as two dozen silhouettes.

Silhouettes stand tall, and they throw great, goosey-looking dark shadows, too. For optimal visibility, most hunters recommend setting them three steps apart. Some prefer five or six steps between decoys. Three steps seems about right to me, although I will pack them a little tighter around the landing zone to look like geese crowding around corn, and I have talked to hunters who like to pack them so tightly around the kill hole that they become difficult to walk through.

It’s fine to mix silhouettes and 3-D decoys, and whenever I can bring a dozen or so good-looking full-bodies, I’ll set them in the hole so they are the decoys geese are looking at as they come in to land.

Last fall, the pond I often hunt had so little water that it was tough to find a spot deep enough to float a decoy. I used a few goose floaters, a couple of ducks, and fourteen or so silhouettes with Dive Bomb’s extra-long 30-inch stakes in the shallows and on shore. Ducks and geese loved them.

I am coming to believe that the best duck decoy is a goose decoy on land or water, but there are mallard, pintail, and wigeon silhouettes on the market, too, if you want to add skinnies to your duck spread.

The new silhouettes have thin spring-steel double-stakes in place of the wooden or plastic stakes of original Realgeese or Outlaws. They are much easier to stick into the ground. Sometimes you have to feel around for a soft spot in hard or frozen ground, or bring a mallet. You slide the decoy down the stake a short distance so as not to hit the decoy instead of the stake and you knock it into the ground with about two whacks. I used my silhouettes up to the last day of our season in January and had no trouble sticking them into the ground and sometimes the snow was deep enough that I didn’t even have to try breaking through frozen dirt. Some people use a portable drill. I haven’t had to yet.

6. Silhouettes aren’t the answer to everything.

I am not getting rid of all my full-bodies and shells and replacing them with silhouettes, just a lot of them. Silhouettes look great in the water and on shore, but they don’t move around and make ripples the way floaters do. I’ll use both over water. And, as I mentioned previously, I’ll mix full-bodies and silhouettes on land, and throw in some sleepers, too. I saw a video the other day of hunters drilling holes in the ice of a frozen pond for their silhouettes. This is way too much work when all you have to do to use a sleeper shell on ice is take it out of the bag and set it down.

Also, if you hunt heavily pressured geese, you need to be able to mix it up to keep spreads looking fresh and different throughout the season. Silhouettes might be the answer one day, full-bodies might work the next. But, of course, you have to have the silhouettes to find out.