Jay Kehrer took the deer while hunting in Hamilton County, Illinois. A state biologist said the strange buck appeared to be in good health 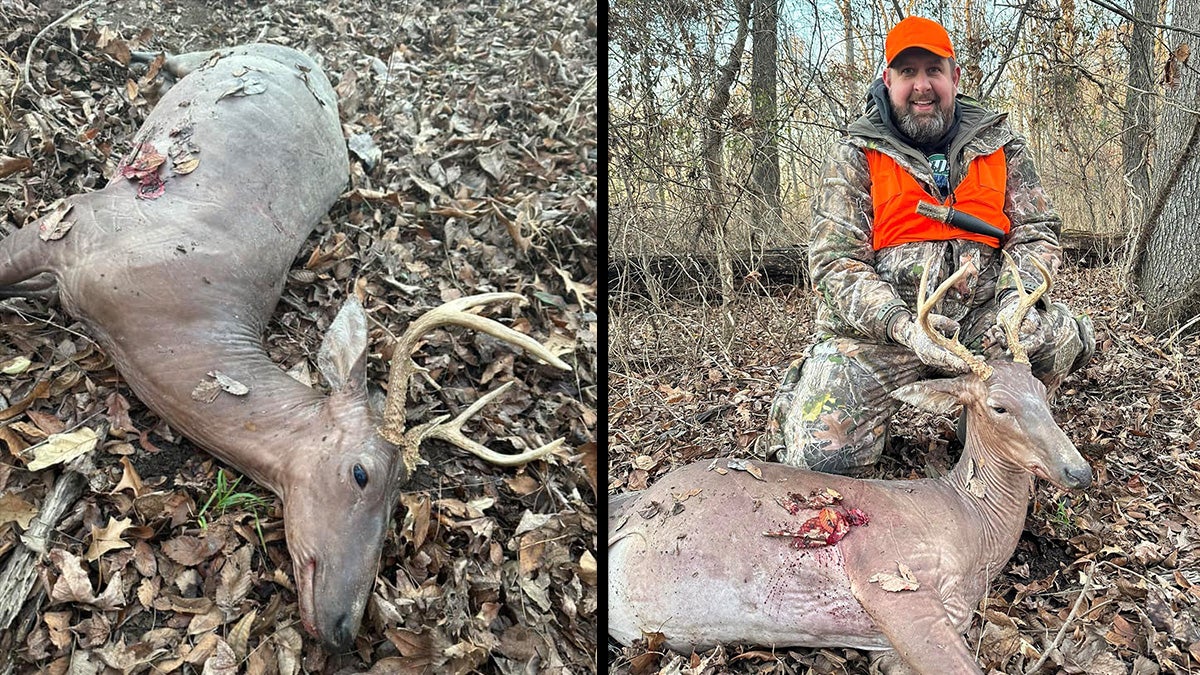 The deer had some hair on its ears, pubic area, and scent glands. Jay Kehrer
SHARE

Kehrer hunts with his father and his son on a plot of 40 acres in Hamilton County, Illinois, near a town called Dale. This fall, they noticed an unusual-looking whitetail deer. “We were getting trail cam pictures of a deer that looked like it had reddish color fur,” Kehrer tells F&S. “We use Spypoint cell cams because we live about 100 miles away from where we hunt. It looked red in the sunlight and then in the shade, it would look chocolate. We had no idea what it was when we first saw it. We actually thought it was melanistic and called it ‘Hershey.’”

The deer was young, and Kehrer initially thought about letting it grow for a couple of years. But he worried another hunter would take it because of its atypical appearance. With Illinois’ second gun season beginning on December 1, he was strongly considering tagging the buck if the opportunity presented itself. “On opening night, all of a sudden, my son and I look out in the field and it was that red-colored deer,” says Kehrer. “We were like ‘Oh my gosh, there it is!’”

The buck wandered off and disappeared for 30 minutes, before returning. Kehrer asked his son Lucas if he wanted to shoot the deer, but he demurred, hoping for a bigger buck. At the time, neither of them knew exactly what they were looking at. When the deer gave him a shot, Kehrer took it and made a solid hit. “I’m thinking I shot this chocolate-colored deer and was already planning to get a whole-body mount done,” he says. He and his son followed a blood trail for 40 yards to recover it. “We walk up on the deer, and we’re like, ‘what are we looking at, here?’ It was not what we were expecting at all…I was never thinking it was a naked deer. I just thought it had cool-colored fur.”

“It seemed like a healthy deer,” he says. “We know some game wardens and called the local captain of the area. He had one of his deputies come to look at it. He contacted a state biologist. The biologist said there was nothing wrong with it except that the fur was gone, and that the meat is safe to eat.”

Kehrer doesn’t know why the deer was hairless but doesn’t think it had mange, which typically results in patchy skin and visible sores. Instead, he said the deer looked “like it was shaved,” except for its scent glands, pubic areas, and tips of its ears, which all had some fur. One of the neighbors later told him that he’d seen the deer acting like a normal buck and chasing a doe several weeks prior. “We took it to our local butcher shop. They do hundreds of deer every year and said it seemed perfectly healthy,” he says. “The biologist said it wouldn’t have much fat. Because it didn’t have fur, it was burning its fat at a much faster rate. So, it was the leanest deer I’ve ever killed.”

Read Next: 8 of the Strangest Deer Ever Taken by Hunters

Kehrer has no qualms about eating the deer’s meat, though he’s been unable to definitively confirm what led to the buck’s unusual condition. He plans to get a pedestal mount done and put it on public display at a local market. “The fact that I was hunting with my dad and son made it a cool, three-generation experience,” he says. “I’m 45 years old, and I’ve never heard of anything like this before.”