Jacob Noe and his family had been chasing the buck they called Big Spindly for years. Noe finally hung a tag on him at the end of last month 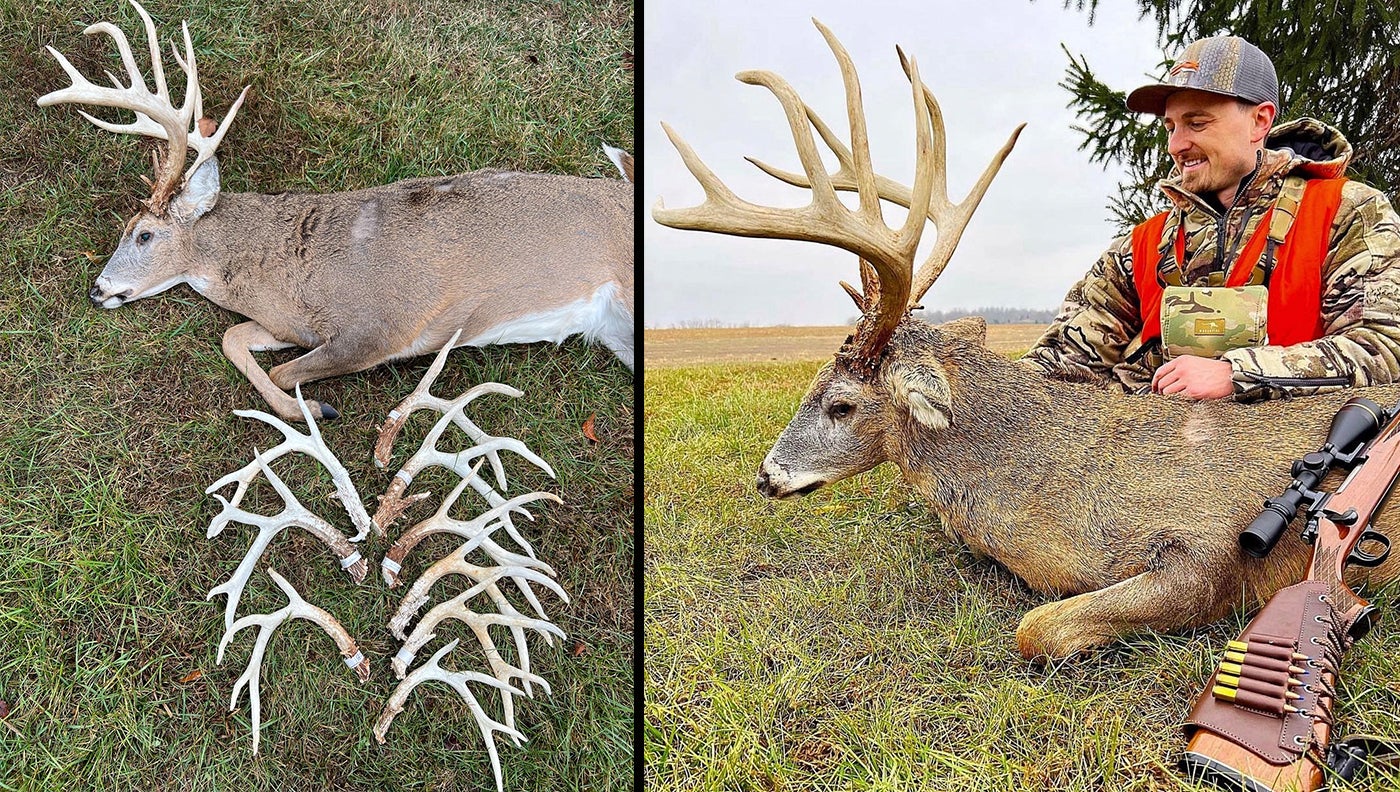 At the end of last month, Indiana hunter Jacob Noe tagged a huge typical whitetail that he’d been watching since at least 2016. He called the 8 ½-year-old buck “Big Spindly,” though the buck seems to have grown out of whatever spindliness he may have once exhibited. Noe had gotten hundreds of trail-cam photos of the buck over many seasons and collected six years worth of sheds before finally ending the campaign this fall.

The hunter’s family purchased and started managing their property in Warrick County 17 years ago, and it has developed into a great piece of hunting land. “My dad and I both began shooting 130-inch bucks at first,” Noe told F&S. “After about 10 years, we started averaging 150- to 165-inch bucks. And in the past seven years, we’ve been fortunate enough to harvest five bucks north of 170 inches, two of which surpassed that 190-inch mark.”

Noe and his wife, Ashley, got their first opportunity to tag Big Spindly way back in 2017. “Ashley and I were hunting together, and we snort-wheezed him in to just 15 yards. He was a 140-inch 3 ½-year-old then. She intended to take him, but he busted us when we clicked off the safety on her crossbow.” In retrospect, Noe is thankful that the hunt didn’t work out. “In the years that followed, we had a number of encounters with him but never could get a shot. Spindly had our number.”

Although the buck showed up regularly on their trail-cameras, Noe worried that one day he wouldn’t. “He was a buck surrounded by high pressure,” he said. “Though our property is private, we have hunters all around. In fact, they’re more hunters now than ever. This made me especially nervous that Spindly would get picked off while chasing a doe.”

Luckily, that didn’t happen. On November 25, after six years of pursuit and 13 days on stand hunting the buck during the 2022 season, Noe had his final encounter with Big Spindly. He was videoing the hunt by himself on a very foggy morning with temperatures in the low 40s. His hunting area is reclaimed coal ground, and his specific blind location overlooked a cut soybean field surrounded by sericea lespedeza grass, wild locust trees, and bur oaks. A stand of young timber sloped down into a bottom with mature timber and swampland.

It wasn’t long after daylight when a nice 4 ½-year-old, 140-inch buck with a chocolate 8-point rack walked by. The buck fed in the soybeans as Noe watched patiently. A few minutes later, two spike bucks meandered in and out of view. Then, around 6:45 a.m., the Big Spindly materialized through the fog. “It happened quickly,” Noe said. “He came around a point dead downwind on high alert scanning the field. I knew immediately it was him and acted fast. When I opened the window, I could feel the wind swirl in the blind, so I quickly turned on my video camera and made sure he was in frame before I took the shot.”

The 85-yard, quartering-to rifle shot connected, and the deer ran just 35 yards and toppled over. Incredibly, the buck landed in one of his known beds, where Noe had found the deer’s 6 ½-year-old shed antlers two years earlier. As Noe packed up his gear to leave the blind, other deer continued to run around. A nice 130-inch 10-pointer chased a doe past him as he soaked up what’d just happened.

“I called my wife and replayed the story with her and our two boys,” Noe said. “They were all so excited to finally get their hand on Big Spindly’s legendary rack. The plan was to wrangle up the family and recover him together. We were not 10 yards off the field when I spotted his white main beam through the brush. We walked up on him together as a family.” Over the years, Noe had a total of four encounters with the buck and this father had a total of three. “After so many seasons and all of the time in the stand, I was beginning to think it was never going to happen,” Noe said. “I was at a complete loss for words when we all walked up to him.”

Because Noe had found the buck’s shed antlers every year going back to 2016, he was able to compare the racks from year to year. And while some buck will begin to go downhill by age 8 ½, Big Spindly grew his biggest set of antlers this fall. Overall, the buck grossed a whopping 192 6/8 inches.