Travis See spent a total of 100 days over the course of three season hunting this huge buck. It all paid off on November 12 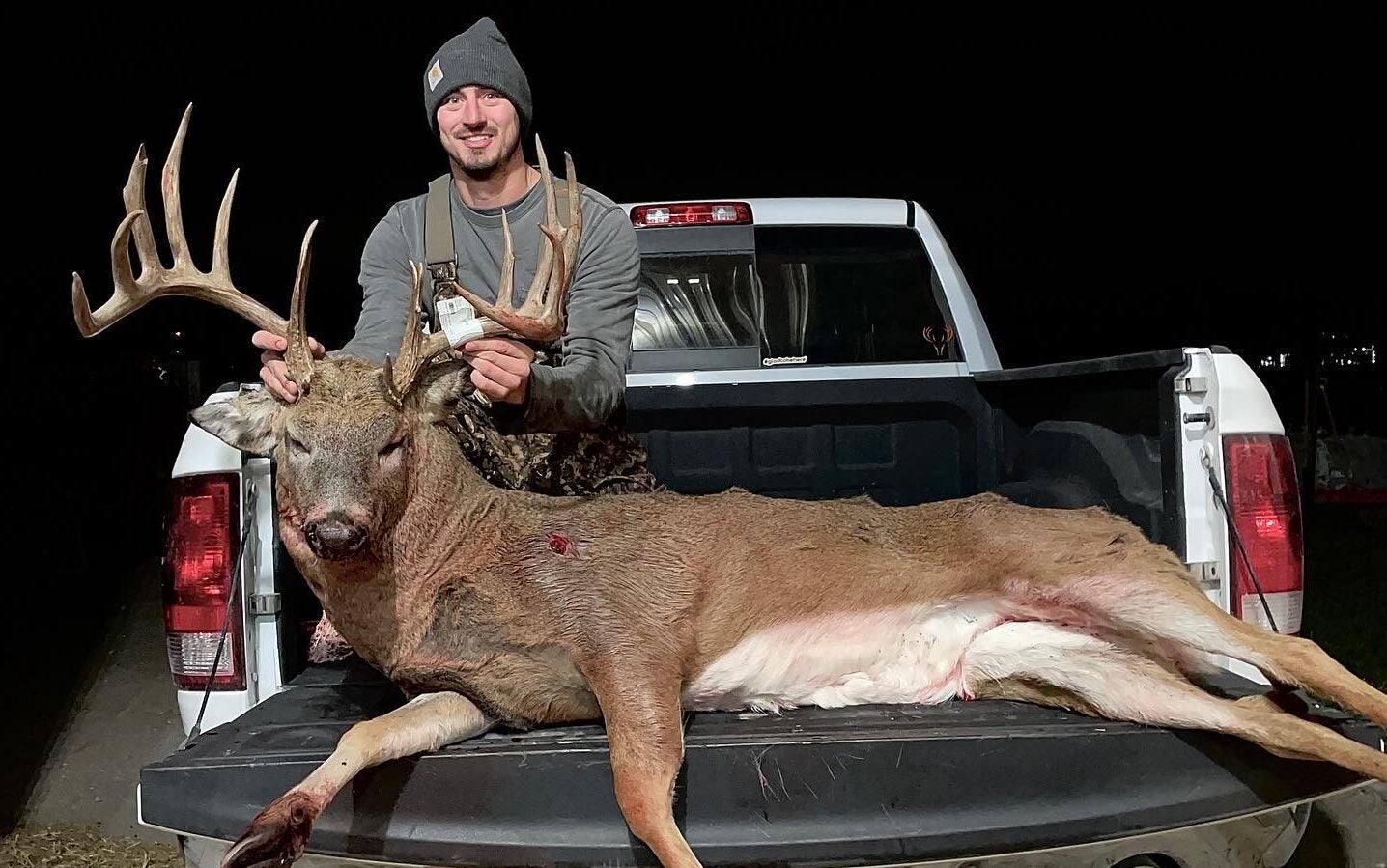 Very few hunters ever see a buck that’s 6 ½ years old, let alone harvest one. But Travis See did both this season. He and his brother got their first two trail-camera photos of the big whitetail in 2019. At that time, the buck was a main-frame 10-pointer. In 2020, the deer returned and was an even bigger 12-pointer with some trash. In 2021, the deer became a ghost, and the brothers saw him only once during hunting season. But when this past shed season rolled around, they got confirmation that the buck had survived another fall and winter.

“In Spring of 2022, I found his left side shed,” See told F&S. “Then two months later, a half a mile away, my dad found his right side while planting soybeans. At that point, I knew we could define his safe zone and home range.” The property the Sees hunt is ideal Iowa whitetail habitat, consisting of ag ground, timber, CRP, a creek, and a lot of thick, nasty cover. There was every reason to think the buck would still be around come fall, and he was.

The morning November 12, 2022, was cold with 20-25-mph winds out of the northwest that made it feel even colder. Travis climbed into his morning stand and saw several turkeys and just one deer to kick off the morning. He heard pheasants cackling in the distance, too, but all told, it was a slow sit by Iowa standards during the middle of the rut.

The afternoon, on the other hand, was a different story. See watched about 10 does, a couple basket-rack bucks, and a solid 145-inch 8-pointer move through the area around his stand. He also spotted his No. 3 target buck but didn’t get a shot at it. This worked out in his favor, though, because only moments later, after nearly 100 hunting days over the course of three seasons targeting this specific buck, he finally had the encounter he’d been waiting so long for.

“He was 80 yards away working along a main trail headed toward a pinch point and sniffing does,” See said. “I knew he would hit a Y and either come in front of me through a clearing, and I’d have him at between 5 and 30 yards, or he go behind me where I had one shooting lane that would give a 30-yard shot. Either way, I knew I needed to just relax and let him close the gap.”

As the buck slowly moved along the first route and within range, See drew his bow, settled the pin, and took the 23-yard shot. The hit looked good and the deer tore off and disappeared after 70 yards or so. See waited a half hour, climbed down from his stand, and found bright-red, bubbly blood on the ground. He recovered the giant buck not far from where he’d lost sight of it.

See’s father and brother soon joined him celebrate. “There is a lot of time and energy that goes into family farming, bowhunting, and land management,” See said. “This hunt was close to picture perfect. To harvest a buck of this caliber on the land we’ve worked so hard to own and maintain makes it even more memorable and rewarding.”

See credits his success to reading the wind, using good access routes, and not overhunting a spot. He also checked cameras and hunted with a purpose and tried to do things strategically and meticulously. Most of all, he had plenty of patience and persistence. “Fast success builds ego,” he said. “Slow success builds character. And hard work pays off.” In this case, it paid off with an absolute monster of an Iowa typical whitetail. See’s buck green grossed 194 3/8 B&C.