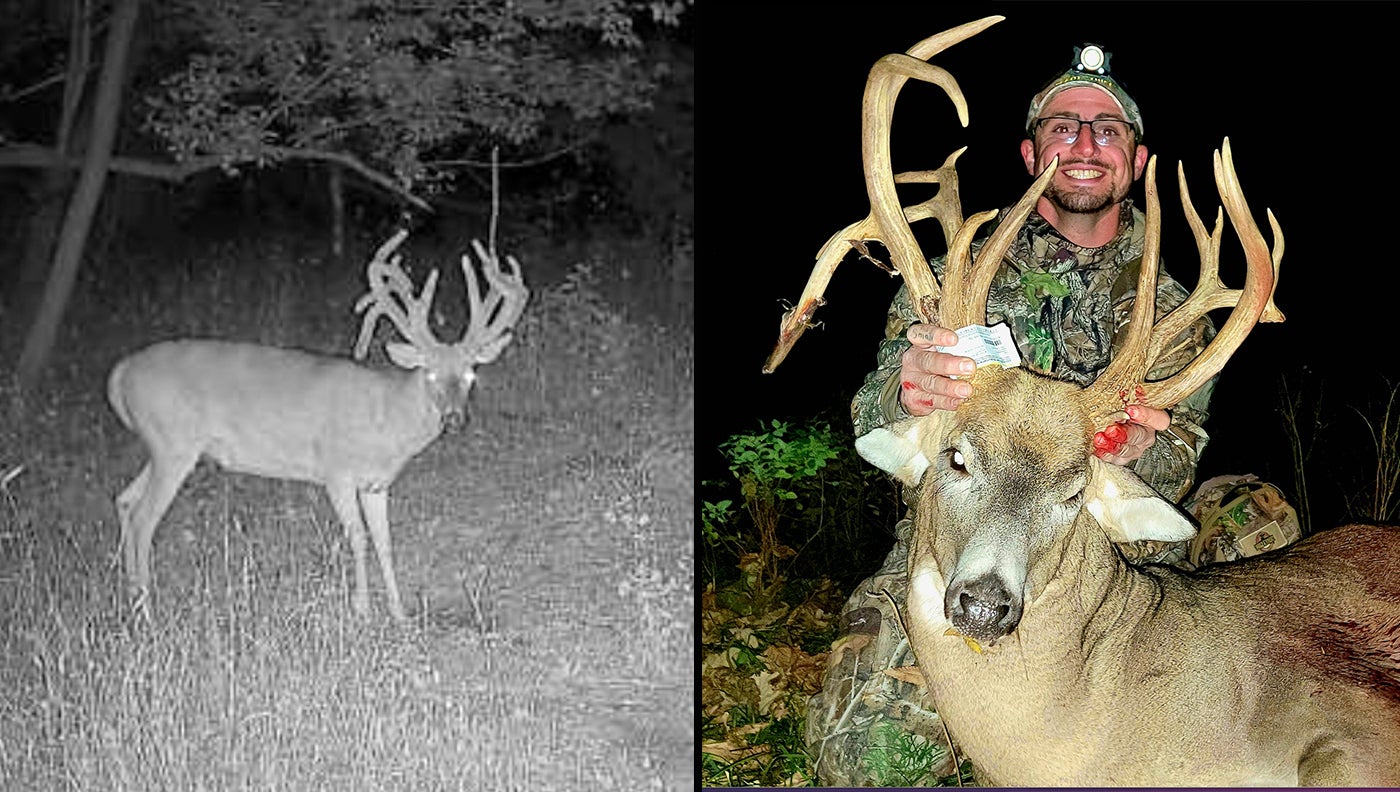 As soon as Orlando Vivone started getting pictures of the huge buck, he was determined to put a tag of the deer. Orlando Vivone
SHARE

Iowan Orlando Vivone is a quick study. While the 2022 season marked only his fourth with a bow in his hands, Vivone had already tagged three nice bucks. Buck Number Four, however, was in a whole other league—a 195-inch bruiser nontypical that Vivone had been obsessed with since he got the first trail-cam pics of the deer in August. “I’d seen a buck with a rack like that.” he told F&S. “I have access to other pieces of land and each one had at least three mature bucks on them, but I wanted the buck I called ‘Freak Nasty’ more than all of them.”

The buck was living on a property that Vivone only started hunting in 2021. After not seeing any deer there last year, he initially assumed it wasn’t a good spot. “But then I was turkey hunting there this spring, and while carrying out a tom along a ridge overlooking the entire property, I noticed how tough it would be to get there and all the food surrounding it and thought instantly, That’s where I’d be if I was a big buck. Vivone scouted the property that spring and summer, put up a camera and mock scape, and immediately started getting pictures of big bucks—but none of Freak Nasty. “Later I learned that he spent most of the summer on the neighboring farm. Then as fall approached, he finally appeared.”

Vivone studies trail-cam pics with a keen eye, then develops hunting strategies based on the conditions. “On all my properties, I would note the time bucks came in, which way they would go in and out, and the wind direction on that day,” he said. “Based on those pics, everything told me that if I wanted to shoot Freak Nasty, I needed to hunt that property on a southwest or south wind.” When the wind was right, Vivone and his brother hunted the area and saw a shooter buck, but not Freak Nasty. “After dark, we moved the stand closer to where we’d seen the nice buck, and I decided to give it one week and only return if the wind was perfect.”

On the afternoon of October 17, Vivone knew he had the right wind to hunt the property again. “I brought my buddy Tyrell Smith, and when we were walking up to the stand my brother and I had hung, I asked him if he wanted to sit there or somewhere different. He looked at me weird and said he’d hunt the other stand a few hundred yards away and walked off.” Once Vivone got into his stand, his buddy texted him, writing: “Did you mean to put me in the better stand? Because the one you’re in doesn’t look good buddy, no offense.”

“I started to get real skeptical about my spot,” Vivone said “because Tyrell is more experienced than I am. But I kept telling myself, You did the homework; have faith.“

As the afternoon wore on, Vivone became even less optimistic. A few does behind him caught his wind and blew, making a scene. “It seemed that a nearby spike buck was the only thing I was fooling. I remember thinking, If I can’t fool a doe, I’ll never fool a mature buck.” After a while, he noticed a small basket-racked buck coming through the timber toward his stand. The deer jumped a fence and then hit a scrape in front of the stand. “I ranged him at 22 yards, and as I did, he looked back like he’d heard something. I looked and saw a huge-bodied deer coming. Finally, I noticed one of the drop tines, and I knew I would shoot if I got the chance—but I still didn’t realize which deer he was.”

Vivone’s nerves were firing when the buck jumped the same fence and walked to the scrape visited by the smaller buck. “I knew exactly how far he was and gave him a bleat to stop him,” he recalled. “He froze and gave me a perfect broadside shot, and I watched my arrow bury in him. He ran uphill toward the fence and when he reached it, he tried to jump it but couldn’t.” Tyrell met Vivone at his stand after 30 minutes, and the two of them walked back to the truck and put away their gear to give the buck a little time. “When we went back to track him, we started right where I shot and followed the blood trail for 60 yards—and there he was. Only then did I realize that I was finally looking at Freak Nasty in the flesh.”

The hunters took the buck to friends at Raised Hunting TV, who were kind enough to weigh him. “He was 234 pounds field-dressed, so roughly 290 pounds on the hoof,” Vivone said. “We had a professional scorer come in, who scored the deer at 195 1/8—my biggest buck ever. I’ve only been bowhunting the last four years, but it has become my passion. I have come to love it, and I take it seriously. I did so much homework and put in an endless amount of scouting to get this buck tagged, and, of course, he was worth it all.”