Southwest Kentucky is one of the nation's top trophy buck destinations. Suddenly, a week into bow season, they're staring at an emergency ban on baiting 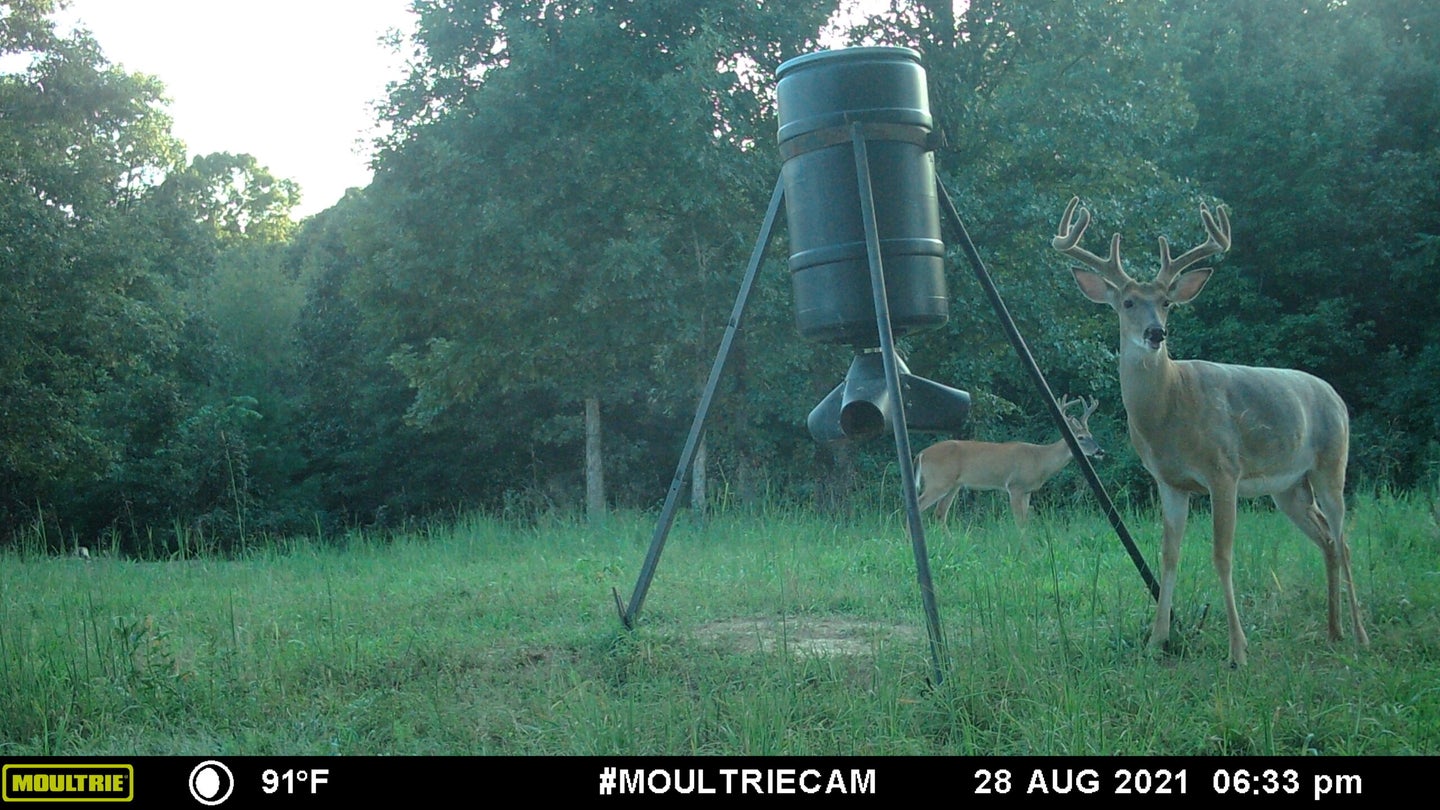 A pair of velvet bucks visit a feeder in Kentucky—maybe for the last time.
SHARE

On Wednesday, Sept. 7, the Kentucky Department of Fish and Wildlife Resources implemented a portion of it’s Chronic Wasting Disease response plan, which calls in part for an emergency ban on the use of bait and minerals in five southwestern counties, after a mature doe in Henry County, Tennessee, was confirmed CWD positive. Henry County borders Calloway and Graves Counties in Southwest Kentucky.

The state’s CWD response plan has been in place since 2002 and outlines specific actions to be taken if CWD is detected within another state 30 miles or closer to the Kentucky border. To be clear, CWD has not yet been detected in Kentucky, but because the infected doe was just 8 miles away, the response kicks in.

The plan calls for CWD surveillance zones to be designated in Southwest Kentucky, where the department will test heavily for CWD presence in hunter-taken animals. KDFW deer biologist Gabe Jenkins said testing efforts in the region will increase by “several hundred percent” compared to previous years.

“Testing in that area has always been a challenge,” he told F&S. “It’s very rural, but if there’s a silver lining to this, it’s that it’s happened right at the beginning of deer season, and so we’ll be able to work with hunters all fall to get an adequate sampling size. If we’re able to sample most of the deer taken there this fall, we’ll have a good handle on whether CWD is there or not.”

Expect the Bait Ban to Become Official After the Public Hearing

The proposed surveillance zone (SZ) right now includes Calloway, Graves, Marshall, Hickman, and Fulton counties. In addition to more testing, the response plan calls for an emergency ban on baiting and minerals. If put in place, this will be, by far, the most impactful and controversial change for hunters. The Fish & Wildlife Commission is scheduled to hold a special meeting today, Sept. 10, to vote on amending various deer hunting regulations already on the books for this season, including 301 KAR 2:015 – Feeding of Wildlife.

If history is any indication, a bait ban will not go over well with Kentucky deer hunters. Back in 2019, I wrote a story about the fight to lift Michigan’s baiting ban in the Lower Peninsula and parts of the U.P. That ban was originally enacted as a response to CWD being discovered in Michigan in 2008. Hunters raised hell over it for years until, in 2019, the state Senate advanced a bill to lift the bait ban. (Ted Nugent even testified in favor of it). The bill was ultimately vetoed by Michigan’s governor, though, and baiting in those areas remains illegal today.

I’ve not hunted Michigan, but I’d guess there is as much deer bait per acre in Kentucky as anywhere in the country. Baiting is part of the hunting culture here—and a big part of the economy too. Unlike Michigan, Kentucky is a destination trophy whitetail state. Our public hunting isn’t great, but we have cheap over-the-counter tags, a centralized location, and easy outfitter qualifications. Lots of people come to Kentucky on guided hunts, and I’d be shocked to learn of an outfitter in Kentucky who doesn’t use bait. That includes me, since my wife and I operate an outfitting business on the side, right here in Calloway County.

Controversy or not, my guess is the baiting ban will become law in these counties after the commission meeting, and I doubt it’ll be lifted anytime soon after. Baiting bans are standard procedure in CWD response plans everywhere because biologists largely agree that the practice unnaturally congregates deer and causes them to swap saliva.

CWD Will Most Likely Be Found In Kentucky Soon

There are counterarguments to that. Some say that food plots, hot white oaks, and primary scrapes have the same effect. But the reality is none of those things concentrate deer, day after day, for weeks on end, in a 4-foot circle of dirt the way a corn pile does. And besides CWD, there’s growing evidence to suggest that bait sites have other negative impacts, like concentrating predators and causing aflatoxin poisoning. Bottom line: I’ve never heard a wildlife biologist say baiting is a good thing for deer—and off the record, many of them will tell you it ought to be illegal.

But it’s not just up to the biologists. Kentucky’s wildlife commissioners are appointed by politicians, and though they take guidance from biologists, they have the license-buying public to answer to as well. That public knows that access to good hunting ground is tougher than ever to come by, especially in a state like Kentucky that’s 95 percent privately owned.

A baiting ban will be controversial because bait helps hunters kill deer. It can be a great equalizer if you’re stuck on the 20 acres behind the house and the neighbors are all running corn piles, too (baiting is illegal on public land, though). Right now, Kentucky is one of the best states in the nation to kill a big velvet buck—something the state agency and outfitters alike readily promote. But September bucks are especially vulnerable to bait. I’d guess that at least 80 percent of the big ones killed in September are shot over or near a corn pile. Like most agencies, the KDFWR works hard to recruit new hunters, and making it harder for folks to kill deer doesn’t help.

Still, this is CWD we’re talking about. The situation isn’t likely to get any better. The disease will probably be discovered in a Kentucky deer sooner or later. (My money is it happens this fall). That’s going to mean more regulation changes in more counties in the seasons to come.

Does a Bait Ban Really Help Stop the Spread of CWD?

Jenkins stressed that the plan in place has been reviewed extensively, including by the public, and that it’s believed to be both effective and reasonable. “We didn’t hold back in writing it, nor did we feel that we went overboard with restrictions,” he said. “If we thought sharpshooting deer from helicopters was the right move, that’s what we would’ve written. But that’s not what’s needed.” It’s also important to note that a lot of time and thought has been put into this plan over its long existence. Jenkins referred to it as a “living document” that’s changed with the science and CWD management developments over time. “This isn’t something we just hung on the shelf and picked up when we needed it 19 years later,” he said.

Still, over the bait issue especially, the department is in for some major headaches. On the one hand, I think the department could gain better ground by driving home the most important steps hunters should be taking in the fight against CWD. Today’s hunters need to know how to take CWD precautions, like quartering and deboning their own game, since moving dead deer around is a proven vector for spreading the disease.

We also need safe, easy places (not roadside ditches) to dispose of scraps, like spinal columns, rib cages, and skulls. We need fast, convenient places to have deer tested for CWD—and I’d be all for a license upcharge to cover the costs of that effort. (Testing deer costs about $20 a pop, maybe more, and that’s a real burden on cash-strapped agencies).

We could do that, leave the baiting laws alone, and still be ahead of where we are now without upsetting the order of things much at all. Besides, do we really know if outlawing bait will fix or stop CWD from spreading in Kentucky? It hasn’t in Tennessee, where hunting over bait is, for all intents and purposes, illegal. And yet some counties in southwestern Tennessee have CWD prevalence rates of almost 14 percent.

As a Kentucky Hunter and Outfitter, I Can Live With a Bait Ban, Even a Statewide Ban

Still, Jenkins is confident that a baiting ban is the right thing to do. “Frankly, people worrying about how a baiting ban is going to impact their deer season this year is a little selfish,” he said. “Hunters in their 30s and 40s aren’t going to see much of an impact to the deer herd in their lifetime because of CWD. It’s our kids and grandkids who will feel the effect. Don’t we want to do everything we can for them to have deer to hunt?”

A baiting ban is probably coming regardless, at least for those southwestern counties. So if we should truly be taking all steps possible to prevent CWD, and baiting is truly problematic, as Jenkins and about every other deer biologist I know says it is, the department ought to just rip the band-aid off with an immediate statewide ban, or one starting in fall of 2022.

They’ll have 120 counties’ worth of pissed-off hunters to deal with all at once, rather than five or six new ones every year. But over the long run, I’m guessing Kentucky hunters will reset and realize that life goes on without corn piles—and I think a good many of them will appreciate the department’s proactive effort. Besides that, in October and November, when the overwhelming majority of our deer are killed, baiting doesn’t help you much, and so I doubt there’ll be any big difference in the annual harvest. A baiting ban might even mean bigger deer in the long run, since there’ll be fewer 3- and 4-year-old bucks killed in September.

And, of course, there’s the added benefit that our deer herd might not be extirpated by a neurological disease that kills every animal it infects.

The alternative is continuing the dialogue and the fight every year, a few counties at a time, over baiting bans and extra restrictions, until hunters resent the department and grow numb to all things CWD-related. See Wisconsin, Michigan, et al. for examples of that.

The top minds in whitetail management consistently say two things: CWD is the biggest threat facing the future of deer hunting, and it’s impossible to combat it without cooperation from hunters. Here in Kentucky, we have the chance to do it right.