Jace Allen arrowed the Bluegrass State Booner after nearly three weeks of hard hunting. Here's his story and what he learned about hunting big public-land whitetails 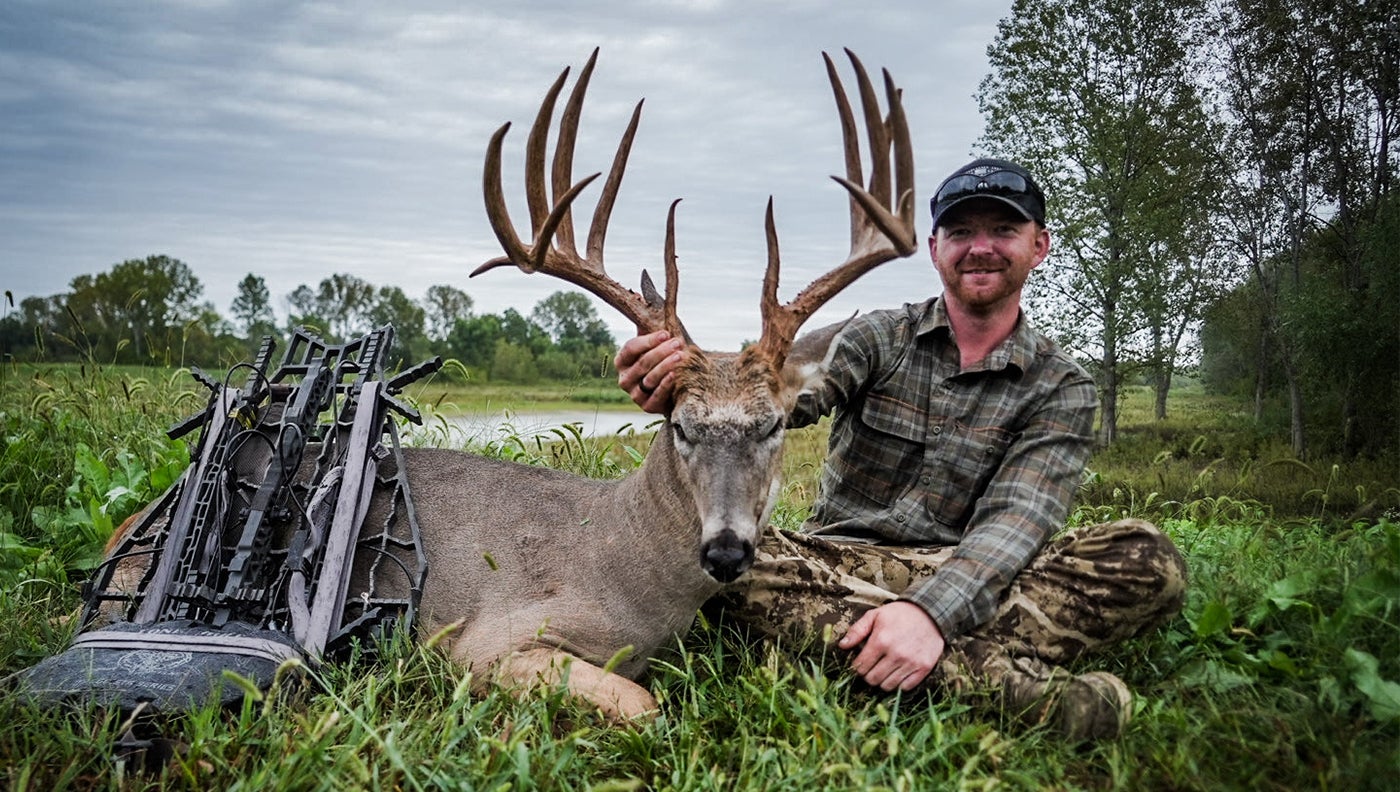 What does it take to tag a Booner whitetail on a DIY public-land hunt? Well, Missouri deer nut Jace Allen can tell you that it isn’t easy. To get his, he traveled to Kentucky, hunted pressured deer for three weeks straight, and passed up a 150-inch public-land buck. But the payoff was huge. With a green gross score of 182, Allen’s buck smashes the B&C minimum of 170, and is the biggest public-land whitetail we’ve seen or heard about so far this fall.

Allen does most of his hunting in his home state of Missouri, but his friends in Kentucky had been pestering him to come down and hunt. “I’d actually never hunted there before, but then my buddy started sending me pics of a pair of bucks living on public land,” he said. “I’d had a recent job change that allowed me more time to hunt, so I finally decided it was time to go. Plus the bucks he had on trail cam were pretty amazing.” Allen arrived just before the Kentucky bow opener and was determined to stay until he killed a good buck.

Where there are deer, there’s hunting pressure

For the first few days, Allen spent most of his time scouting “I was actually there the day before the opener, looking at the land and topography and how deer were moving,” he told F&S. “There were several good blocks of timber, but I noticed that a lot of the hunter effort seemed to be focused on those woods. Meanwhile, there were also a couple of large corn and soybean fields that I knew would be major food sources for the deer. So the first couple of mornings, I just set up so I could glass those fields at dawn, see where deer were feeding and where they might be heading to bed up for the day.”

Allen learned in a hurry that hunting pressure was affecting how whitetails were using the habitat. “I suppose you could encounter some deer in the timber, but my impression was, most of the deer, and almost all the good bucks, were basically avoiding the woods and living in the corn and soybean fields,” he said. “The buck I ended up shooting was one we’d named ‘Crabs,’ and he was often traveling with another really nice buck, one that my buddy had pics of too. This deer was also bedding and feeding in the fields, and I wasn’t the only guy who knew it. One morning I was glassing him and watched him bed down in the beans. I was planning a stalk when I noticed another bowhunter trying to slip in on him. He failed, and I watched five other bowhunters stalk that buck that morning, and they all failed. I was the seventh person to stalk the buck, and I didn’t get a shot either.”

Sneaking in for a shot

Eventually, Allen found himself focusing on Crabs, a buck that had been hit by a bowhunter in the first few days of the season. “I actually helped the hunter follow the blood trail the evening he’d hit,” Allen said. “We followed pretty decent blood but never recovered the buck. As I learned later, the arrow had actually hit the buck’s rack and, since he was in velvet, that’s the reason we found so much blood. When I finally got the buck, you could see the broadhead mark on his rack.”

In the days following that blood trail, Allen was surprised when he was able to spot Crabs again. “I found an island of trees close to the corn and beans that allowed me to see pretty well, and the area had good deer sign too,” he said. “I even had a chance at a beautiful 8-point that I thought would go 150, but I’d already had several encounters with these bigger deer and decided to pass the shot. I was hoping I wouldn’t regret it.”

Allen’s perseverance finally paid off on the 20th day of his hunt. “I was sitting in that island of trees on a morning hunt and spotted Crabs in the beanfield,” he said. “He fed for a while and then bedded down. I did my best to mark the spot, then headed out to my car. I wanted to check the wind direction and make sure I could slip in there and set up on him without bumping him. When I got to my vehicle I kind of chuckled; this buck was bedded less than 100 yards off the road and vehicles were driving by and no one but me knew he was bedded there. I gathered my gear and started sneaking into the beans, using the wind to shield any sound I made as I worked toward him. When I thought I was about 70 yards from his bed, I settled in; I was on my knees and just decided I’d wait for him to stand up, then I’d figure out what to do from there.”

Allen gets his chance

After two hours of waiting, Allen was in for a pleasant surprise. “Suddenly this big rack, followed by Crabs, emerged from the beans—only 29 yards away,” he said. “He looked around a bit, right in my direction, then settled in to feed. I stood up and came to full draw, and when I could see I had a clear path to his vitals, I took the shot. The hit looked pretty good and he ran off, then stopped again to look around. I ranged him quickly at 63 yards, grabbed and nocked another arrow, and shot him again. This time he tore off, and I felt he was in a lot of trouble. He reached the edge of a CRP field adjacent to the beans and tipped over. I couldn’t believe it; after almost three weeks of hunting I finally had one of the bucks I’d come there to hunt.”

Read Next: 10 Ways to Beat the October Lull and Get Your Buck

Allen’s buck was worth the drive, and the effort. The buck had 14 scorable points, with brow tines that measured more than 6 inches long and G2s and G3s all 10 inches or better. Allen came up with a green gross score of 182 inches. “Even more important to me than the buck was the hunt itself and the effort and how much I learned,” he said. “It was something to watch these mature bucks avoid hunting pressure, never leaving the area and just adapting to where and when they were encountering people. You’d think they’d go nocturnal with all the hunters around, but they didn’t. The majority of the time, they were within easy sight of at least one road, but when they heard a vehicle coming they’d just lay down for 45 to 60 minutes, then go back about their business. It was quite an education, and to come out of there with a great trophy was just icing on the cake.”