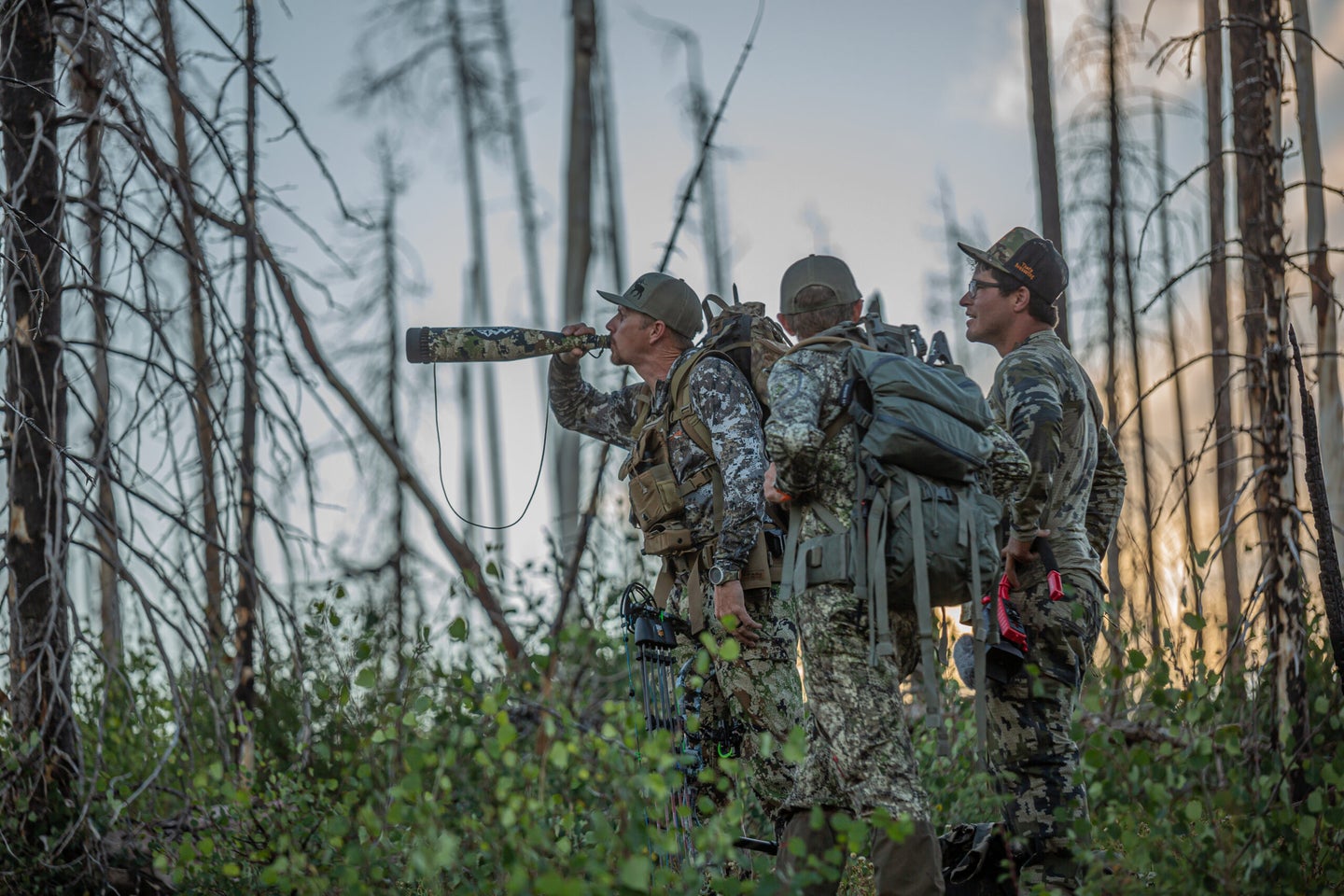 Elk live in magnificent places—deep drainages, cedar-sprinkled canyons, and dark timber ridges to name a few. Each year, thousands of hunters come West to match wits with the king of Rockies. When it comes to filling a tag, some win, but most lose. It’s just a fact.

Success rates for bull elk across the West in public-land over-the-counter units have dipped below the 10 percent line. But don’t let that discourage you. Let it fuel you. Elk are big, bold, bad-ass creatures that demand attention. If you learn to speak elk and understand what elk are saying when you’re hunting them, you can become a 10-percenter.

I don’t claim to be the Rosetta Stone of elk language. I have, however, spent 20-plus years in public-land elk woods. I’ve used calls and watched others use calls to bring elk in close. My hunting comrades and I have killed elk with archery tackle, smoke poles, and rifles, and most often, it’s calling that helps us seal the deal.

This is the call bull elk use to take the temperature of the mountain. It’s a non-aggressive two- or three-note bugle that doesn’t have a significant beginning or end. There is no chuckle involved, and it is the simplest bugle to create with a diaphragm/bugle tube combo.

Use this call to locate elk and pinpoint a bull’s location on the mountain. Don’t try to use the call to finish the bull. If the bull is way off, move closer before calling again.

Tip: Some bulls will stay in one spot for a grip of time and send out locator bugle after locator bugle. When hunting pressured public land, use this to your advantage. Don’t call back. If a bull is talking on his own, use the landscape and move in for the kill.

Unlike the locator bugle in every way, bulls use this bugle to let other bulls and cows know there is a new kingpin on the mountain looking to smack antlers. This bugle is more like a scream. It has a high-pitched screeching front end, peaks, and then finishes with a guttural blast. Bulls will often chuckle (more on this in a bit) after making a challenge bugle.

If you get in a pissing match with a bull, get after it. When you make a challenge bugle, you need to put all your heart and soul into the call. When you finish, you should be a tad lightheaded. If you can get in close to a bull with cows, or a scrapper ready to go to war, and he ushers a challenge bugle, cut him off, and come right back over the top of him. Chances are good he’ll come in on a string.

Most often, a bull will chuckle after a bugle. Why? To sound like a stud for his harem or try to impress a girl he doesn’t have. Sometimes, however, a bull will do nothing but chuckle—produce a few toney grunts and nothing more.

Making a chuckle isn’t hard. All that’s required is to spend time practicing with your diagrams and bugle tube, and learn to push short, heavy bursts of air over the reed toward the end of your bugle.

Tip: While I believe chuckling is a great way to add variety to your calling, I also think it’s an overused call. Hunters love to chuckle, and elk are figuring it out. I only chuckle when I have a bull fooled and want to pour it on or when hunting quiet bulls in dark timber. Over the past couple of seasons, I’ve found quiet bulls tend to chuckle and not bugle when they’re in the thick stuff.

This is not a call I feel you need to use or master. Bull elk do make it, and it sounds like a muffled gargle. It’s common for elk to create a series of short grunts during the rut.

Tip: If you hear glunking, there’s a solid chance the bull you’re after has cows. Bulls use this call to communicate with cows, so you’ll need to adjust your calling sequence accordingly.

Both bulls and cows bark. Barking isn’t good. A bark is single, high-pitched note, and if you hear it once, you’ll never forget it. Elk use barks to communicate danger.

Tip: If you’re in tight on a herd and you hear a bark, the game is about to be over, so make your best move and see if you can get an ethical shot off.

The top two cow/calf sounds you need to master, mews and chirps, are made by a contented group of elk. From the summer heat to late winter’s frigid bite, cows and calves love to mew and chirp. These calls are often short, semi-low pitched, and typically are single note calls. Pay attention when you’re scouting. If you get around a herd of elk, you’re going to hear mews and chirps. Another option is to go to YouTube and listen to live cows and calves make this sound.

Tip: My hunting partners and I have finished more bull elk using simple one-note mews and some excited calf chirps than with estrous whines. Keep this in mind when you’re working on a bull.

Read Next: Why Elk Are My Favorite Big-Game Animals to Hunt

Like the chuckle, it seems this is the call every hunter wants to make. That’s problem number one. Problem number two is that most reed-style calls don’t replicate the estrous whine very well. This is a great call to have in your bag of tricks, and if you can use your diaphragm mouth call to create a whine that sounds kind of like the beginning of a bugle and then cuts off quickly to a nasally finish, you can appeal to a read-to-breed bull.

Tip: You don’t hear cow elk make this sound often, so you should follow suit. Stick to mews and chirps, and only break out the estrous whine when you have a snot-dripping bull coming on a string. This call also works well to stop a bull for a shot.