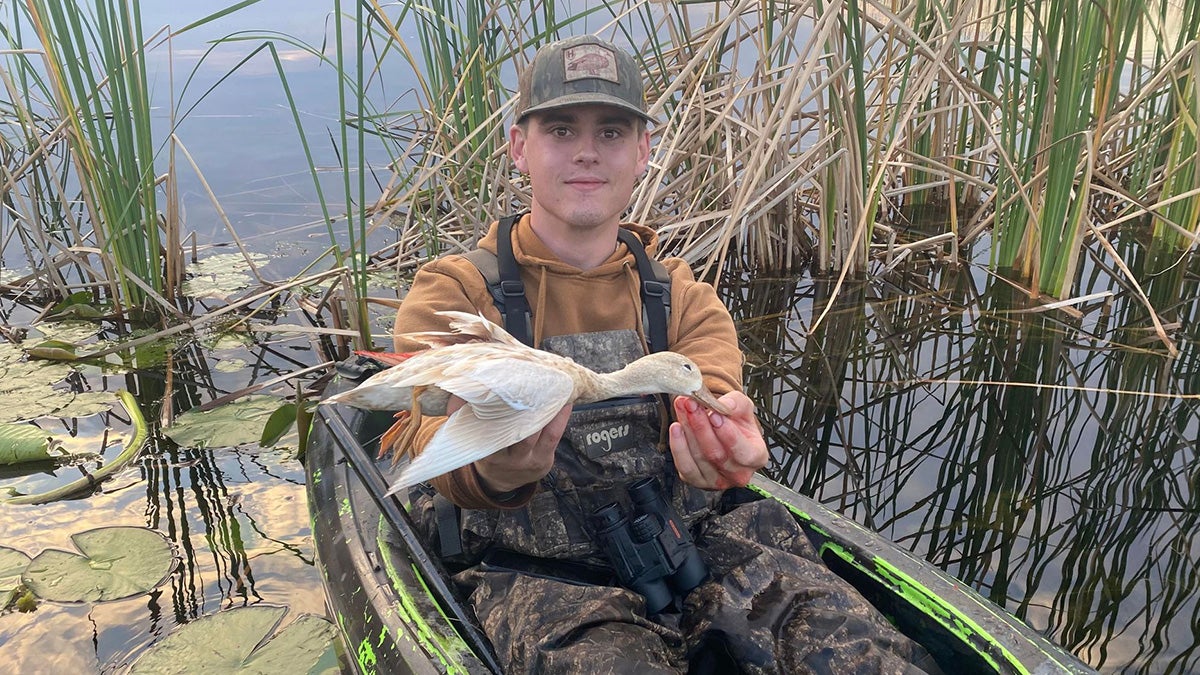 Dalton encountered the teal while scouting and sprung into action. Matthew Dalton
SHARE

Twenty-year-old Matthew Dalton recently bagged the trophy of duck of a lifetime. Dalton, of Goose Creek, South Carolina, had traveled with three friends to freelance in central Florida earlier this season. They were scouting a big lake in the afternoon for their first hunt the next morning—when Dalton spotted a white bird among a raft of coots.

“I thought it was an albino coot, and that it might be fun to put a sneak on it,” he tells F&S. “We had just arrived and had all our gear with us, so I got my duck hunting kayak and started making a stalk.”

The white bird flushed before he got close, and Dalton could tell it was a puddle duck by the way it jumped up out of the rafted coots. He marked where it landed at the edge of some grass 800 yards away and began another stalk. As he paddled closer, he stopped to glass every 50 yards. Through his binoculars, Dalton could see the duck preening and was able to identify it as a teal. He also saw a bunch of ten to fifteen nervous coots between his kayak and the white bird. Afraid the coots would blow his stalk, Dalton put his paddle down, lay as low as possible in the kayak, and reached out to grab aquatic plants and ease himself forward. After slowly closing the distance to 35 yards, he picked up his gun and shot the duck.

The bluewing teal hen Dalton killed is almost entirely white, with some brown-edged feathers, dark eyes, and regularly-pigmented feet. Its distinct coloring comes from an inherited genetic abnormality called leucism. Although both leucism and albinism can produce white animals, they are not the same thing. Albinism is caused by a lack of melanin, the substance that determines skin, eye, and, in the case of birds, feather color. Albino animals often suffer from poor vision as well, as melanin aids in the development of vision. Albinos often have pink eyes.  Leucism, on the other hand, is caused by the reduction or absence of all skin pigments. It can result in large patches of white feathers on a regularly-colored duck for a piebald appearance, or leucism can cause a duck to be all-white with brown-edged feathers, like Dalton’s bird.

Read Next: A Pintail-Mallard Hybrid? Here’s What We Know About Duck Hybridization

Leucistic ducks are quite rare. They don’t live long in the wild because they often stand out, making them easy targets for predators and hunters. Also, researchers say that leucistic and albino birds have a hard time finding mates, making it difficult for them to pass their genes to the next generation.

Dalton had never seen a leucistic duck before—and he has seen a lot of ducks. While he is only 20 years old, he has been duck hunting since he was seven. He has hunted across the United States and in Canada. He plans to have famed waterfowl taxidermist Shane Smith mount his leucistic teal. The rest of Dalton’s freelance hunt was a success. He and his buddies enjoyed good days on teal the next morning and on divers the next, but of course, nothing they shot topped the rare white teal Dalton bagged on that first afternoon.