While rare, harrowing stories about locked-up bucks tend to trickle into the F&S news desk each fall. Here are five of the craziest locked-up buck stories you'll ever read 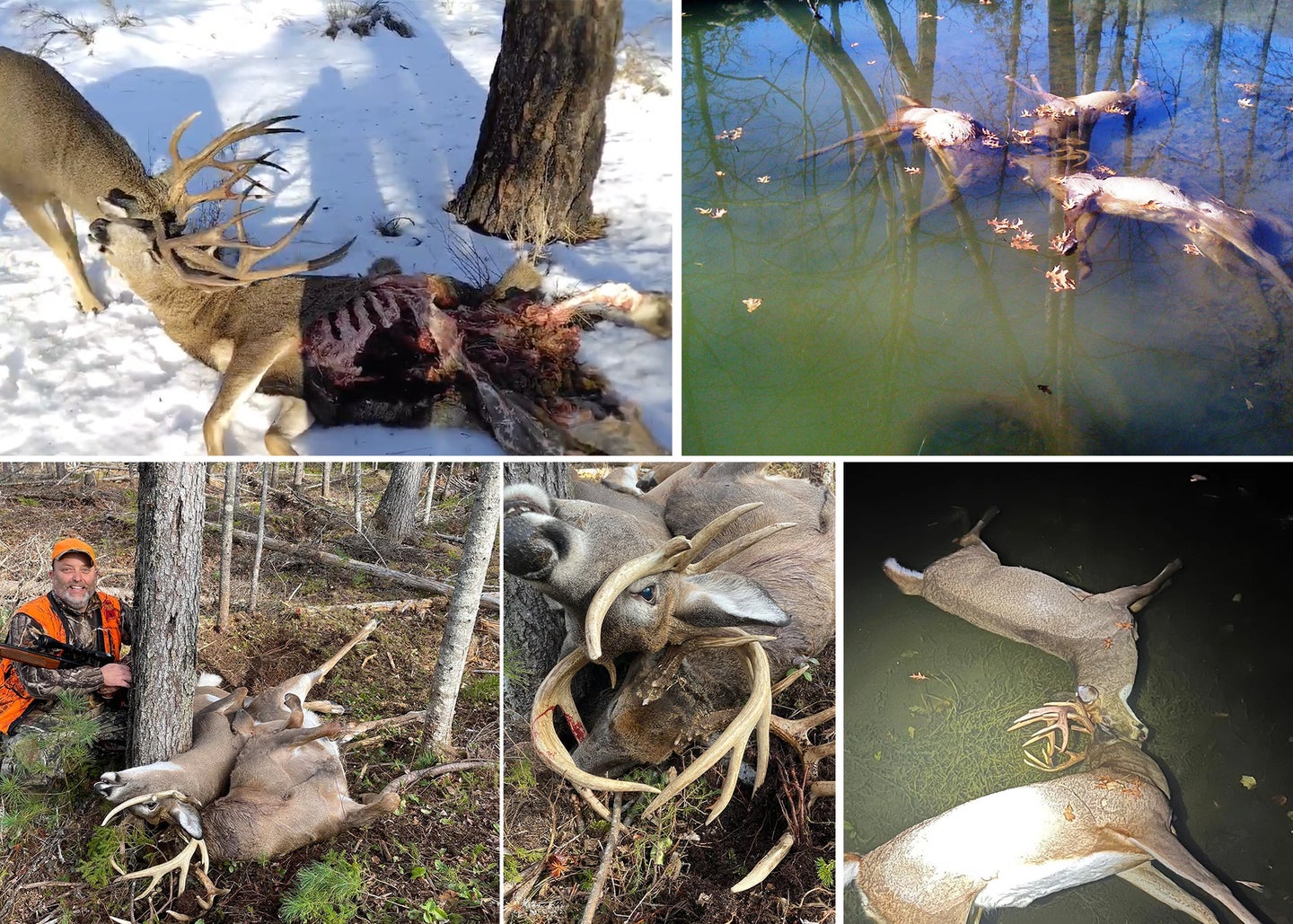 When deer antlers lock up during the heat of the rut, crazy scenes of sheer brutality tend to be the end result. Adam Segroves/ Minnesota DNR/ Dan Blanchette/ Brien Burke
SHARE

Deer antlers serve a dual purpose in nature. The most obvious role that the appendages play is one of display or aesthetics. A well-developed, highly symmetrical set of antlers signals a big buck or bull elk’s genetic superiority, which can secure the attention of does in estrus or harems of cows in heat. But the sharp adornments serve an equally important function during brutal battles for dominance that play out each fall between male members of the deer family. In territorial bouts, bucks bash their antlers together while jockeying for position.

When evenly-matched ungulates fight, things can go sideways in a hurry. Sometimes, antlers get intertwined and hopelessly locked in place. When this happens, it often spells the demise of one or both of the animals involved. In other instances, though, there are survivors. A buck is seen the following season sauntering around with the antlers and the skull of a former nemesis still affixed to its rack. Or maybe a courageous third party steps in with a power tool and frees two locked-up bucks from an otherwise fatal predicament.

These types of scenarios play out time and time again, year after year, and we’ve been reporting on them for over a decade. Here are five of the most compelling stories of locked-up bucks that have ever come across the F&S news desk.

If there’s one thing we’ve learned it’s that locked-up bucks and big bodies of water don’t mix. Such was the case earlier this year when a couple of nice Minnesota whitetails were found floating near a lakeside homeowner’s backyard dock. According to the Minnesota Department of Natural Resources, the trophy-class deer were engaged in an early rut sparring session when they locked antlers and somehow ended up in the lake. With their racks permanently entangled, the bucks were unable to make it out of the lake alive. They drowned together and were discovered by the homeowner the next day.

Back in December 2021, a Wisconsin bowhunter named Troy Rebarcheck entered the fray of a locked-up buck battle with an angle grinder in hand. The hunter’s life-saving attempt to free the deer was captured on camera, and what ensued looked downright dangerous. The bucks didn’t like the sight of Rebarcheck or his encroaching angle grinder one bit. And they appeared to go into full-on fight-or-flight mode as the noisy grinder wheel inched ever closer. Eventually, Rebarcheck managed to sever the locked horns, and the animals went free.

A Maine hunter got a two-for-one earlier this season when he bagged a mature 9-point buck that was locked up with a dead 10-pointer. It wasn’t immediately clear to Adam Blanchette just how the 10-pointer met its demise, but with a tag in his pocket, he decided to harvest the survivor—a valid choice given the animal’s unfortunate predicament. “I looked down at him and I said, ‘I’m sorry,’ and I said it right out loud, and I shot him,” Blanchette later told the Bangor Daily News. “It was bittersweet. It’s almost emotional. You feel bad.”

4. Three Bucks Get Locked Up and Drown Together

We just republished this story in its entirety, but it’s so compelling that it demands inclusion in this round-up as well. The unlikely scene was discovered by a timber surveyor in Ohio. What he found was three mature whitetail bucks locked up and floating in the shallow end of a small creek. The sight of the three dead bucks floating there “like a flower pedal” is arresting, to say the least. And it begs the question: How the hell does something like this even happen? In his 2010 deep dive, written shortly after the incident occurred, longtime F&S contributor Steven Hill puts a keen, focused eye on one of the most shocking locked-up buck stories we’ve ever seen.

5. Mule Deer Buck Survives While Locked Up with Dead Deer That Was Scavenged by Coyotes

When a United States Forest Service employee in northern California spotted a couple of locked-up mule deer in the snow, he didn’t suspect that one of the bucks had already endured an untimely end. So you can imagine his surprise when he got closer and realized that, not only had the larger of the two deer died during the encounter, but his body cavity, rib cage, and hind quarters had been completely torn apart—presumably by a hungry pack of coyotes. What’s even more astonishing about the grizzly scene that Adam Segroves encountered on November 19, 2022, is the fact that the dead deer’s resilient opponent somehow managed to survive the ordeal unscathed. And then it walked away after Seagroves cut its antlers free from the dead deer with a standard issue bone saw.