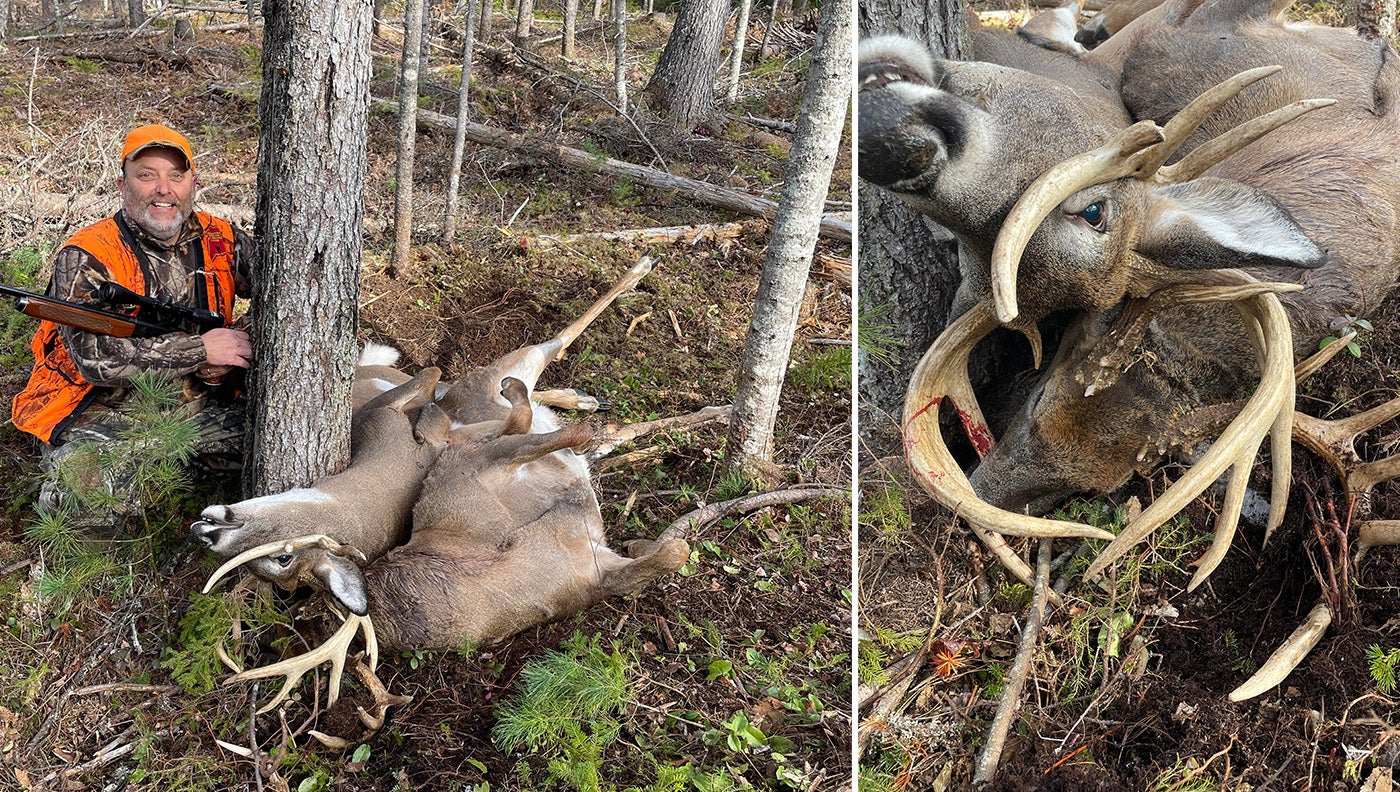 Both bucks got trapped on the forest floor when one of the deer's tines hooked under a tree root. Dan Blanchette
SHARE

Close encounters with mature bucks are hard to come by in the Maine woods. But finding a pair of shooters with their antlers locked together is another level of rare altogether. That’s what Adam Blanchette of Lebanon, Maine happened upon while hunting in the Katahdin Iron Works area on the morning of November 10.

Blanchette said he detected movement at the base of a far-off spruce tree and was inching in for a closer look when he noticed a deer hoof pointed skyward. He texted his brother Dan to tell him he was watching what looked like a deer in its death throes.

But as he got closer, he realized there were actually four upside-down hooves belonging to two different bucks. The bucks were frozen to the forest floor after their antlers locked up during a fight, and a tine from one of them got hooked up under a tree root.

“They must have fought for awhile because there [was] 50 yards of torn-up ground,” Blanchette said, in a video that he filmed shortly after the hunt. “As I came over, the one with his head back was alive, and he was freaking out. The other one [had] been dead for a while. He was all swelled up.”

The head of the dead buck was facing down when the hunter approached. The live deer was lying face-up with its neck wrapped around the trunk of the spruce tree. Blanchette said he was blown away, but with a tag in his pocket, he knew what he had to do next.

“I looked down at him and I said, ‘I’m sorry,’ and I said it right out loud, and I shot him,” Blanchette later told the Bangor Daily News. “It was bittersweet. It’s almost emotional. You feel bad.”

Blanchette called his brother and his dad, and they dragged the 9-pointer over half a mile of slash, stumps, and blowdown—back to the family deer camp. But not before contacting the Maine Warden Service, which dispatched a local officer to the scene. The warden said that the previously deceased deer had been dead for at least 24 hours, and he issued Blanchette the permit he needed to possess its antlers as well.

Read Next: A Pair of Big Locked-Up Whitetail Bucks Drown in Minnesota Lake

According to the Bangor Daily News, Blanchette plans to have both deer mounted in the position they were found in. “It was awesome to be able to do it with my dad, my brother, and my friends,” he said. “We were able to enjoy seeing something that we’ll probably never, ever, see again.”