A U.S. Forest Service employee pinned the deer down while a passing hunter removed part of its rack with a bone saw 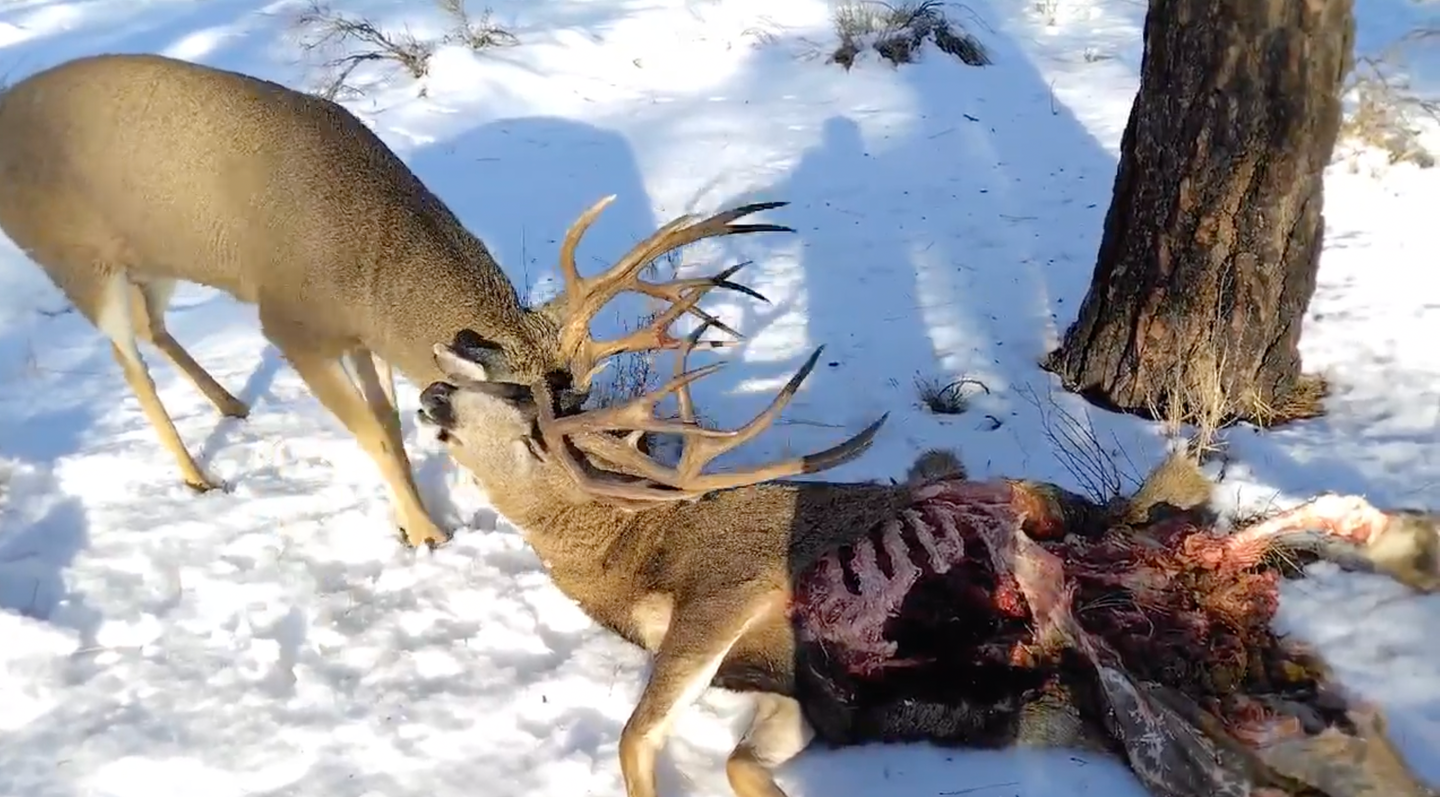 The dead buck's carcass had been scavenged by a pack of coyotes when Adam Segroves found it stuck to a live 4X4. Adam Segroves
SHARE

Adam Segroves is a wildfire archeologist with the United State Forest Service who spends his days mitigating and repairing natural resource damage caused by megafires in northern California. While traveling for work on the morning of November 19, he happened upon an extraordinary sight. “I took a look in the rearview mirror, and out of the corner of my eye I saw this huge rack,” Segroves told F&S. “But the deer’s head was down, and it didn’t come up as I passed by. Then I realized he was locked up to the antlers of an even bigger buck.”

It was clear that the big muley big bucks had been fighting. But by the time Segroves found them, one was wobbling from side to side, visibly exhausted, and struggling to remain upright. The other had been dead for several hours or even days in his estimation—its carcass completely scavenged by a pack of hungry coyotes.

“The older 5X5 either passed out or bled out overnight, and the coyotes must’ve ate him while the 4X4 watched and defended himself,” Segroves said. “The 5X5’s eyeballs were frozen solid when I found them, so he’d obviously been dead for a while.”

Upon finding the surviving deer, Segroves sprung into action. “I knew I couldn’t leave him like that. He’d either freeze or starve,” he said. “So I grabbed him by the horns and positioned myself where I could use my fire boots to heel kick one of his tines.”

But the horns wouldn’t budge, and with the surviving mule deer becoming increasingly agitated, Segroves started looking for an alternate plan of action. He flagged down a passing hunter who happened to have a field dressing kit complete with a bone saw. Segroves did his best to subdue the ornery 4X4 while the passerby sawed away at the entangled tines.

“I just kind of sprawled out over him and held his antlers into the snow and down onto the dead deer,” he said. “After a good bit of struggle, and with him fighting with us through all of that, we finally freed him then backed up and got behind a tree.”

Read Next: A Pair of Big Locked-Up Whitetail Bucks Drown in Minnesota Lake

Segroves said the beleaguered 4X4 charged the carcass of the 5X5 a few times before stumbling off into an uncertain fate. “His limbs were kind of locked up. I was scared he was going hypothermic,” Segroves said. “I hope he didn’t bump into a cat on his way to wherever he was going.”

An avid hunter who grew up chasing whitetails in south Georgia, Segroves says he had first spotted the big 5X5 back in July. He’s hoping the 4X4 will live to see another season. “It was a shame to see that big buck go out like that, but that’s the way the natural world works. Mother Nature isn’t always kind or fair,” he said. “I’ve still got the little piece of tine from that 4X4. When I get a break from work, I’m going to run up the direction he went to see if there’s a dead head with a matching tine gone. If not, I’ll keep my fingers crossed that he made it and keep an eye out for him for next year.”