It took Drury four years to tag what he describes as "the mother bear of difficult whitetails." Here's how he did it and what you can learn from his hunt 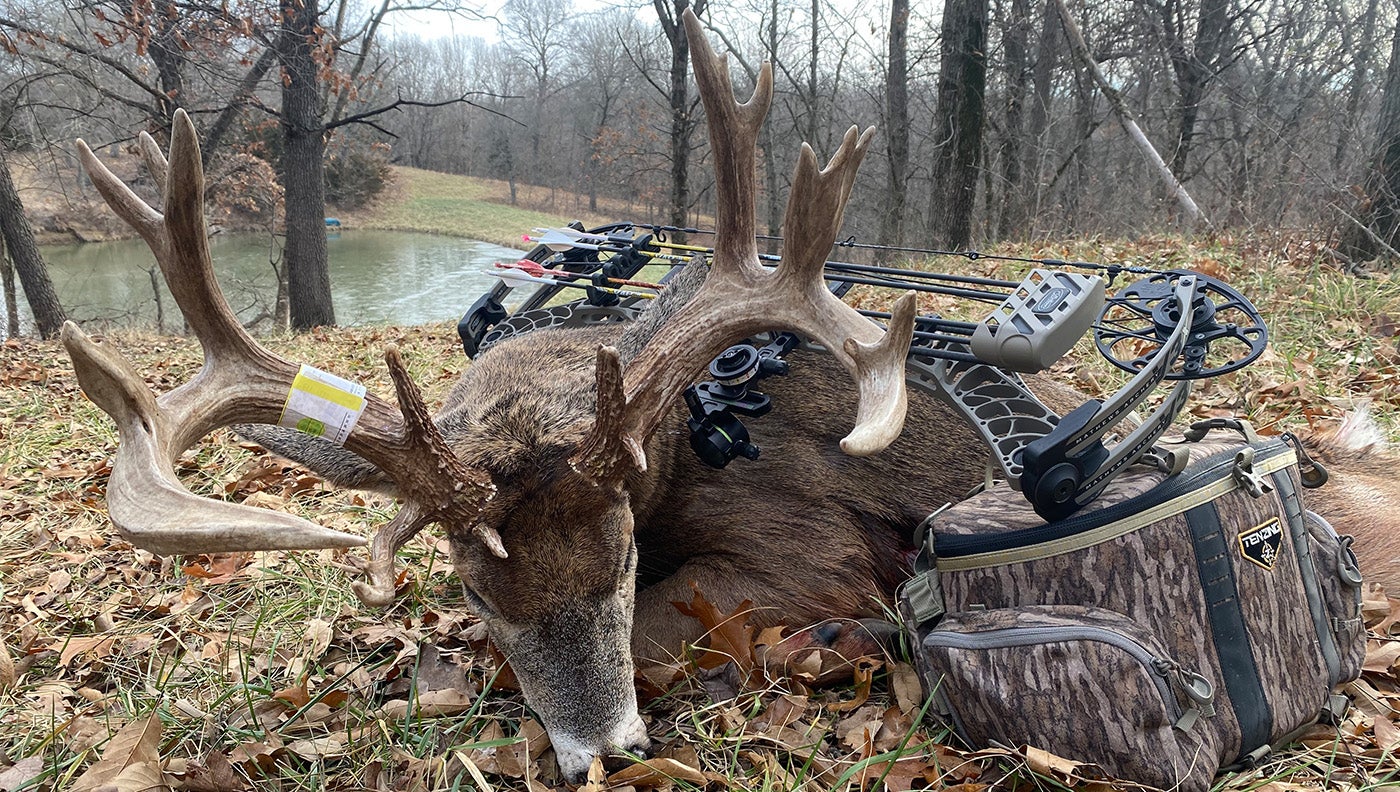 Last year’s deer season is long gone, and the upcoming hunt is too many months away. But for those of us who never stop thinking about whitetails, now is a perfect to take a closer look at last season’s successes (and failures) and tease out whatever lessons we can that might make us better deer hunters—and might make next fall even better. To kick things off, we’re taking a deeper dive into one of two great bucks that Mark Drury, of Drury Outdoors, took last year—a deer he considers the toughest he’s ever hunted.

Drury, of course, has killed his share of giant whitetails, and if those bucks have taught him anything it’s this: The older a whitetail gets, the more he limits his activity to a handful of spots where he feels safe eating, bedding, and moving. Drury has exploited this tendency many times, tagging mature bucks by first patterning their behavior through a combination of trail-cam pics, videos, and sightings and then putting himself in the perfect spot, where he was almost sure the buck would appear at a given time.

Then came “The Fork Buck,” a Hawkeye State bruiser that tossed everything Drury thought he knew about trophy whitetails out the window.  “I know that nine people in our group hunted that deer over the course of four years, and we could count the sightings of that buck on one hand,” he says. “He was the mother bear of difficult whitetails, without a doubt.”

One of the most maddening traits of The Fork Buck was his constant appearance on Drury’s trail cams. “If there was a buck I had more pics of I can’t think of it,” he says. “This deer walked non-stop and appeared in front of multiple cameras. And unlike most older deer, he was unafraid of the daylight. Normally, we wait to hunt a mature buck until he’s giving us daylight pics in an area where we’ve got a stand. The Fork Buck was a frequent visitor to cameras we had on scrapes and food plots all over my 417-acre farm, and the number of daylight pics we had of him was almost ridiculous. But then we’d set up in those areas, often immediately after we’d get a daylight pic, and we couldn’t lay eyes on him for the life of us.”

The problem was that there seemed almost zero predictability as to when the buck would show up in any given place. “It was completely counterintuitive,” says Drury. “Most Midwestern bucks limit their activity to a tight core area; the older they get, the more of a homebody they become. But this buck, which was 8½ years old when I killed him last year, would show up on a scrape one morning, then we’d get a pic of him a mile and a half away from that spot the same afternoon. We were always behind him, and it seemed like nothing we tried would work. I finally got to the place in my head where I thought he might be unkillable.”

The Legend of “The Fork Buck”

Drury wasn’t about to give up on The Fork Buck, even though he’d already tagged one of his best-ever bucks (the 216-inch giant pictured below) in October of last year. “I felt if I had a chance at him during the archery season, I’d have to kill him before lockdown, when he always disappeared,” he says. “I devoted all my hunting effort to him, but took a different approach. I just picked a spot that I knew he’d used in the past and just waited for him to show up. Because he was so random on camera, I decided to ‘be the camera’ and wait him out. Based on history, I chose two spots and just kept alternating between them based on the wind. I almost never do that, fearing that I’ll burn out a spot, but this deer was so different, I knew I had to alter my strategy to match him.”

Drury stuck with his strategy through much of October, and although weather conditions were prime and other hunters in his group were killing monsters, he never even got a glimpse of The Fork Buck. Finally, he got some trail-cam pics of the deer on a new food plot his group had put in that spring. “I wondered if that new plot had changed his movement enough that he’d return to it. So I settled in there, and on November 3, he showed up at 3:00 in the afternoon. He was tending a doe and working a scrape at the same time, and he finally worked within 40 yards. I honestly thought I was going to kill him right there, but as I came full draw, he turned to face me—a shot I just won’t take.” The doe then moved off the plot and the big buck followed. “I couldn’t believe it—getting him so close, after all that effort, and not being able to make it happen,” says Drury. “It only cemented my belief he was unkillable. The legend of The Fork Buck just got bigger after that.”

As usual, The Fork Buck disappeared for the rest of the rut. “When the shotgun season came I thought about going after him, then decided against it,” Drury says. “The farms surrounding mine are heavily hunted and, given how much he moved, I figured he’d probably get tagged during the gun season, but he didn’t. When the late season came, I had a muzzleloader tag, and on December 19, I went to a food plot I knew he’d used in the late season in the past. I was there at noon and built a brush blind 200 yards off the plot. I was going to go in there the next morning and try to take him with a muzzleloader. So the next day, I wake up early and I pull up to the gate to that farm and my cell phone pings, telling me I’ve got a picture. I look at it and there’s The Fork Buck, walking through the food plot as I’m pulling up. I knew he’d must have heard the sound of my tires on the gravel, and it likely spooked him off the plot. I hunted the blind anyway and never saw a deer.”

Normally, if Drury nabbed a morning pic of a buck near a food plot it would be the kiss of death for that deer. “Putting a buck to bed near a plot in the a.m., and then killing him on that same plot only a few hours later has been one of our most successful strategies,” he says. “But I knew that wasn’t going to work with this deer. So I picked a food plot more than a half-mile away from the morning pic—the plot where I had the fewest pics of him and a spot I hadn’t even hunted that year—and decided to hunt there for the afternoon. To my amazement, The Fork Buck walked out on that plot two hours before dark, and I killed him with my bow at 25 yards. When I walked up on that buck, I was literally in awe. I’ve been chasing whitetails for a long time, and the amount of time I spent studying and strategizing and thinking about The Fork Buck was insane. The day I killed him was the 22nd day I’d hunted him that fall, and I thought about him to the point of obsession. He was by far the toughest buck I’d ever hunted.”

Perhaps the biggest lesson Drury learned from The Forked Buck was that sometime you have to question what you think you “know” about mature whitetails. “It’s natural to get kind of comfortable with the how and where and when of deer hunting, especially if you’ve had a little success,” he says. “We settle into a comfort zone of things that work for us. But this buck took me way out of that comfort zone; all the tactics and strategizing that had worked on other bucks were nearly worthless on this deer. I remember thinking, when I held his matched set of sheds last spring, This might be the only time I actually have his horns in my hands.”

The hunt also underlined something that Drury knew already—that big bucks are individuals, with distinct personalities and behaviors. But some deer buck the behavior norms more than others. “He was more unique than any buck I’d ever hunted,” he says. “Normally, when a buck moves as much and as far as this one did—especially in daylight—he doesn’t live very long. Which, to me, just shows how good he was at what he did. After I killed him, a neighbor over 2 miles away got in touch and said that he’d almost shot The Fork Buck a couple times but couldn’t close the deal. When a buck has a home range that big in the Midwest, it’s almost unheard of for him to live to maturity, much less 8½ years. He was also unique in how he rutted; I think he moved so quickly from one doe to the other that he was literally locked down for a couple weeks. The same buck I had all those pre- and post-rut trail-cam pics of would just disappear from the start of breeding to the late season.”

Bottom line is when you encounter a mature buck who’s behavior is this individual, you have to be ready to try something totally different, which is just what Drury did. And it paid off.

Finally, the hunt taught Drury something about himself—that even after all his years of chasing huge bucks, there were still plenty of surprises out there and lessons to draw from, and that he’s as eager as ever to learn them. There were other mature bucks, including some very nice ones, on his farms that he could have hunted, but The Fork Buck had wriggled under his skin and stayed there. “So much of it was how unique he was and how difficult that made him,” Drury says. “If we got a picture of him, that was literally the worst place to hunt him. But whitetails are our teachers, and that deer taught us so much over the years, and he beat us so many times that when I walked up to him, there was a sense of disbelief. I was so humbled and grateful and honored to even hunt a deer like that. He was the ultimate challenge.”