Patrick Burns was obsessed with this public land buck and chased him for years. Here's how he finally got him 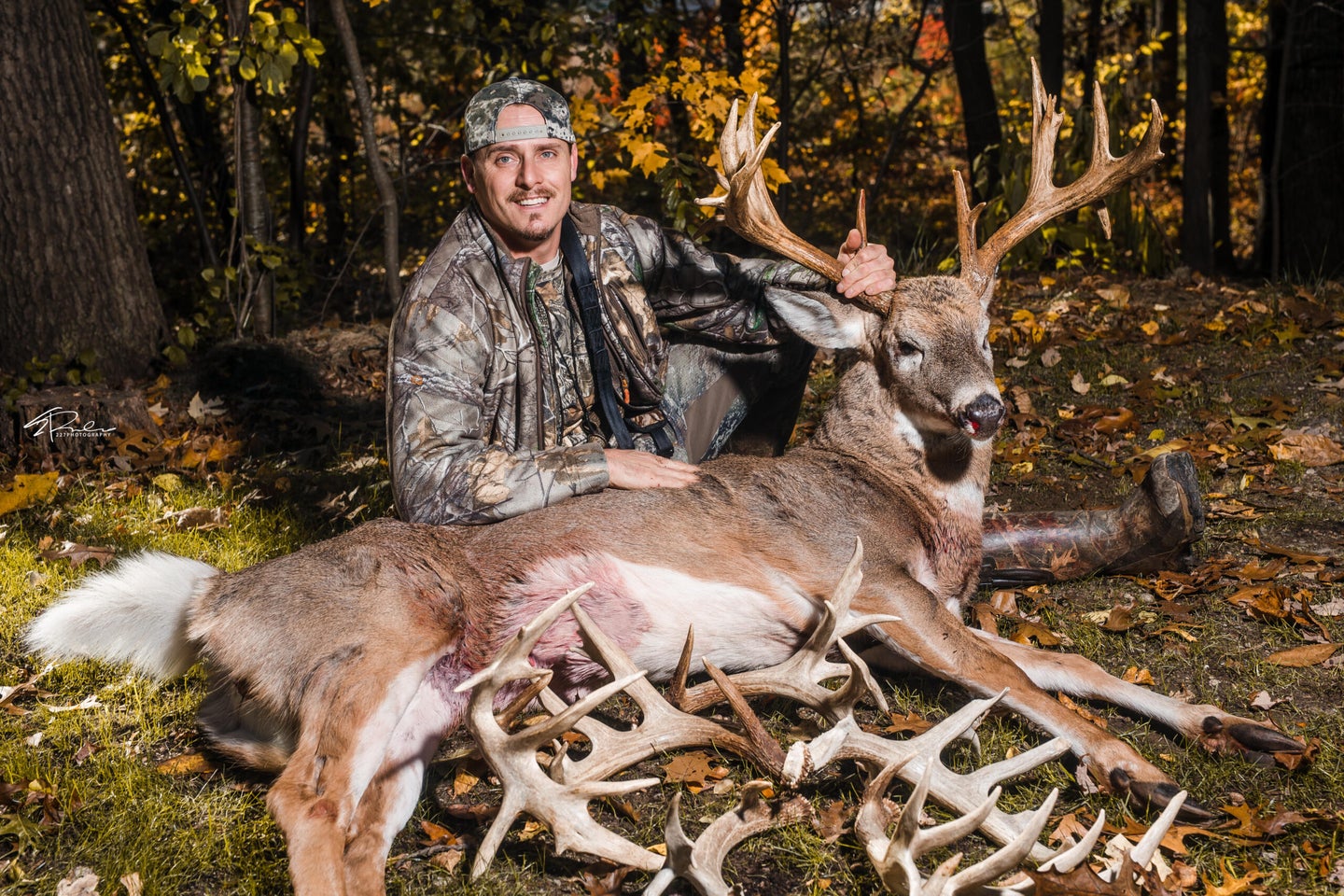 Some people worry when they realize they are obsessed with something. But for Massachusetts bowhunter Patrick Burns, each recorded image he retrieved of the whitetail deer he had dubbed “The Electric Buck” fueled his very being. The five-year quest was nothing short of an addiction. Now, with the massive public land nontypical destined for a place of honor in Burns’ trophy room, he’s learning how to breathe again.

Burns, a Worcester County native, drove a Spitfire broadhead through the gnarly-racked buck’s chest at 4:45 p.m. on November 4 after years of trying to pin down the buck’s preferred bedding areas and core territory. The drop-tined buck with stickers galore has a 24-inch inside spread with between 17 and 19 scorable points. “They going to have to do a panel scoring due to the palmation on one side,” Burns says.

“I stumbled on the first set of sheds in September of 2016 while scouting and have been obsessed with him ever since,” Burns says. “He was a 160-class buck in 2016 when I first found his shed. I was guessing he had to be 4 or 5 years old then.”

That first year, Burns put up a couple trail cameras, but got totally skunked in terms of images of this particular buck. He adjusted fire for 2017 and got one photo, a grainy nighttime shot that resulted in him nicknaming the deer “The Electric Buck.”

“It was a blurry picture of a buck walking by with a crazy rack that looked like electricity on his head,” Burns says. After that, Burn’s quest was on. He would eventually place some 100 trail cameras, burn up an estimated 10,000 batteries and a hike about a thousand miles checking those cameras and looking for sign.

“In 2019, I got a lot more photos with even more in 2020,” Burns says. Then word got out, and other hunters began looking for the deer. “I had to play some defense,” Burns says. “One guy put a photo of the buck on social media complete with information about where the camera was when the photo was taken.”

In 2020 Burns found both of the buck’s shed antlers again. This time, with an estimated inside spread of 18 inches, the set tallied a possible score of 183 inches. From the trail camera photos Burns could see that the buck was almost always nocturnal. Then Burns noticed him making more forays closer to daylight hours.

Confident he had finally pinned down the deer’s primary bedding area, Burns quietly slipped in on the morning of November 4. “It was a sea of mountain laurel,” Burns says, with some of it 9 to 10 feet high—perfect cover for a forest monarch.

As Burns explained in a Facebook post, he had pressured that stand, hunting it all week. “I knew it was risky as I was right in his bedroom,” he wrote. The deer showed up on trail cam photos at 4:45 a.m. Twelve hours later, Burns saw the buck moving through the woods, more than 100 yards away, walking the ridge though the laurel thicket.

“All I could see were bushes moving and the occasional glimpse of his rack,” Burns wrote. “As he got further away, I decided to grunt to see if he might turn. He stopped in his track and paused for 10 minutes. Then, finally, I started hearing movement again. He was heading straight to me. He stayed in the thick cover the entire time. He eventually gave me the opportunity for a shot and although he was facing me almost straight on, I knew I could make an ethical shot. I owed him that. After the shot he spun and ran for 20 yards and expired.”

The deer field-dressed at 196 pounds. “I think he was still in heavy pre-rut mode,” Burns says. One thing stood out to Burns as he looked at the buck: “His sheds and his antlers this year showed no signs of fighting, no broken tines or stickers, anything,” he says. Whether this reclusive buck was a lover or a fighter will remain unknown, but Burns’ obsession with the deer is finally over.