Man Captures Rare Drone Footage of a Moose Dropping its Antlers, Then Collects the Sheds 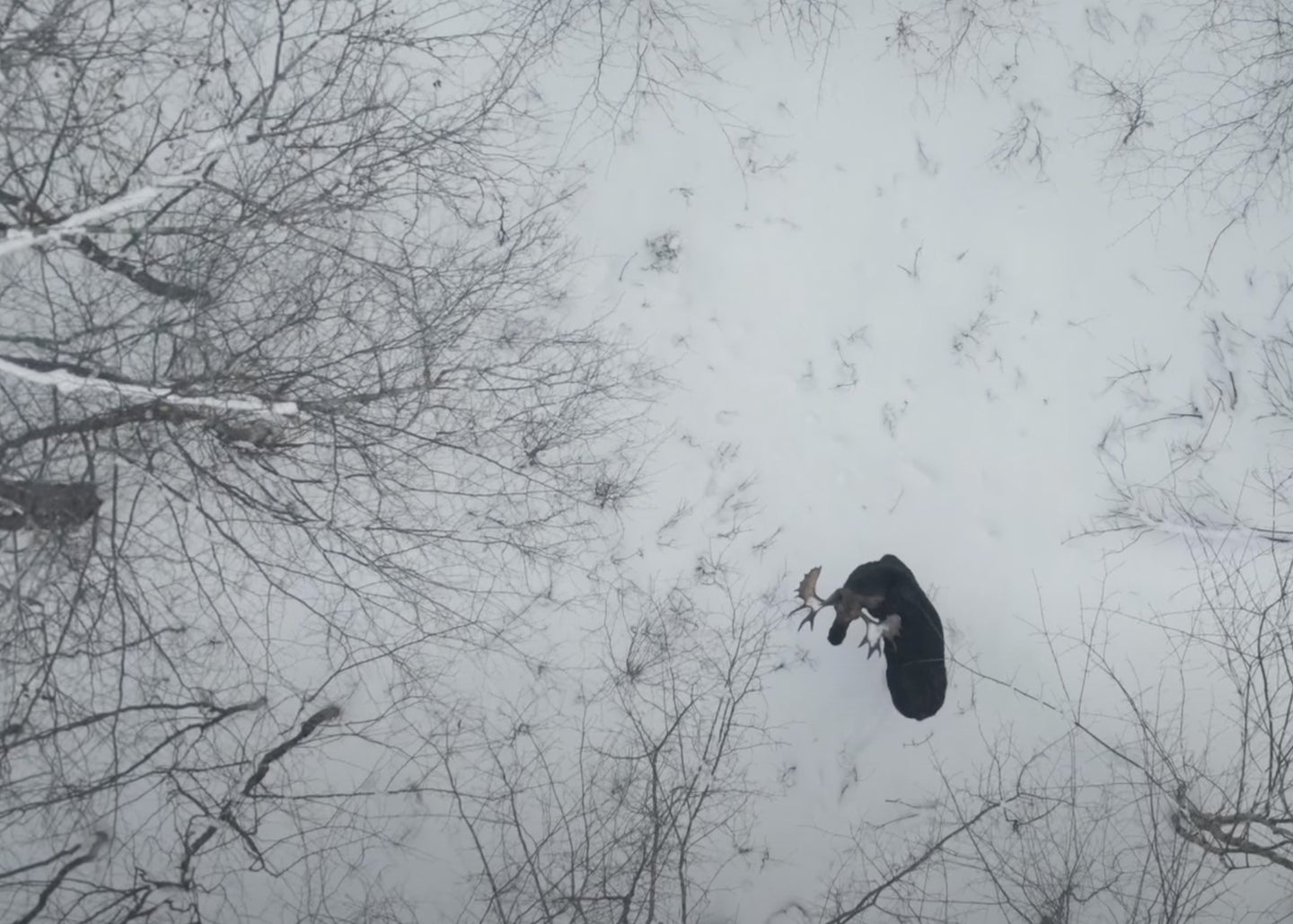 The moose shed its antlers while being filmed by a hovering drone.
SHARE

For the second time in a month, rare footage of a moose shedding its antlers has been captured on video. This time, Derek Burgoyne, a life-long shed hunter from New Brunswick, Canada, used a drone to record the moment a big bull shook off both sides of its impressive rack. Then he snowshoed in to retrieve his first ever matching pair of antlers, which had 17 points and weighed 45 pounds.

Burgoyne, a woods operations supervisor, was using his work drone to survey a remote region of New Brunswick for maple and birch trees. He spotted three bulls bedded in the snow. When the only moose in the group that was still sporting antlers stood up, he steered the drone to follow the bull, hovered over it, and clicked record. Moments later, the moose did a five-second full-body shimmy, ending with a shake of its head—and the antlers popped off. Watch it for yourself below.

In both videos, the moose shake their bodies and then their heads before dropping their hefty antlers on the ground. In both cases, the moose seemed startled when the antlers dropped and ran off as if being spooked. Burgoyne posted the drone footage on his YouTube channel, “Adventures in the Wild,” where one commenter called the event “a magical moment.”

In an an interview with the Guardian, Burgoyne said he’s been hunting for sheds since he was a boy and has collected hundreds throughout his lifetime. He once collected a 33-point rack, which came off of the largest bull moose he’d ever seen.

Over the years, shed hunting has become an increasingly popular and lucrative activity in the United States, with some sheds fetching thousands of dollars. The surge in popularity has prompted some state wildlife agencies to implement new regulations around the pastime.

Read Next: 3 Ways You Might Be Breaking The Law By Shed Hunting

In Wyoming, for example, shed hunting is prohibited on certain sections of public lands—from late winter into early spring—in order to alleviate pressure on deer and elk herds that winter there. The Cowboy State has also taken pains to prohibit “aerial scouting or the use of unmanned aerial vehicles to hunt or harass game animals.”

Burgoyne says that his love of shed hunting comes down to a passion for woodsmanship and a desire to spend more time out in nature. “I enjoy being in the woods,” he told the Guardian. “It’s great exercise and it’s fun tracking the moose through the winter and looking for their sheds in the spring. Each one you find feels like the first one. It never gets old.”