Moose shed their antlers once a year, but the event is rarely seen by people, let alone caught on video 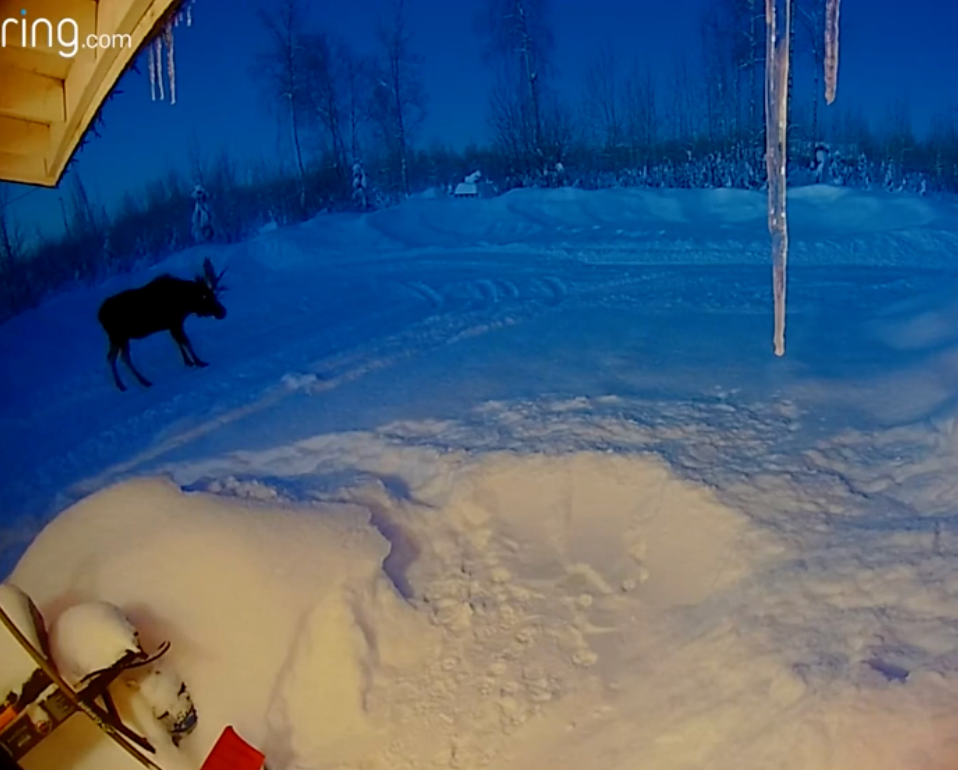 A Ring door cam caught the moose shedding both antlers in a homeowner's driveway. via Tik Tok.
SHARE

Last week a homeowner in Alaska had a large bearded visitor leave a surprise gift in her driveway. A moose shed its antlers and then ran off into the night. And the woman captured the rare event on her Ring camera.

With a snowstorm approaching, Tyra Bogert was visiting her sister’s house when she received a notification from her security camera back home. She wasn’t surprised to see a moose, as the animals are regular visitors to her home and the camera occasionally captures them. “I click on it and ‘Oh that’s a moose,’” she explained to News4SA-NBC. “Wonder what he’s gonna do?’”

In the video, which Bogert posted on TikTok, the bull slowly strolls across the driveway, crunching the snow as he goes. He pauses for a full 30 seconds, framed between the glowing icicles in front of the camera, and seems to scan the horizon. Then he shakes his entire body, like a dog after a swim. The antlers drop off, startling the moose as they fall.

Bogert says her brother encouraged her to post the video because it was such a rarely filmed event. “He’s like, ‘I don’t think there’s any video of a moose shedding his antlers,'” she told Today.com. “‘I don’t think that’s ever been recorded.'”

As of December 22, the video had more than 18 million views and nearly 10,000 shares. Bogert says her husband’s brother will help them mount the 50-inch rack, which her husband posed with on a Ring camera still image shared with News4SA-NBC.

Read Next: Watch a Brown Bear Attack an Injured Moose Next to a Highway

Antlers are the fastest growing tissue of any mammal, and, in moose, can reach 80 pounds—according to the Alaska Department of Fish and Game. At the peak of growth in the summer, moose can add a pound of antler bone in a single day. After the fall rut, as day length decreases, moose produce less testosterone, causing bulls to shed their racks.