The 5 Most Common Shots at Pheasants, (and How to Make Every One of Them) 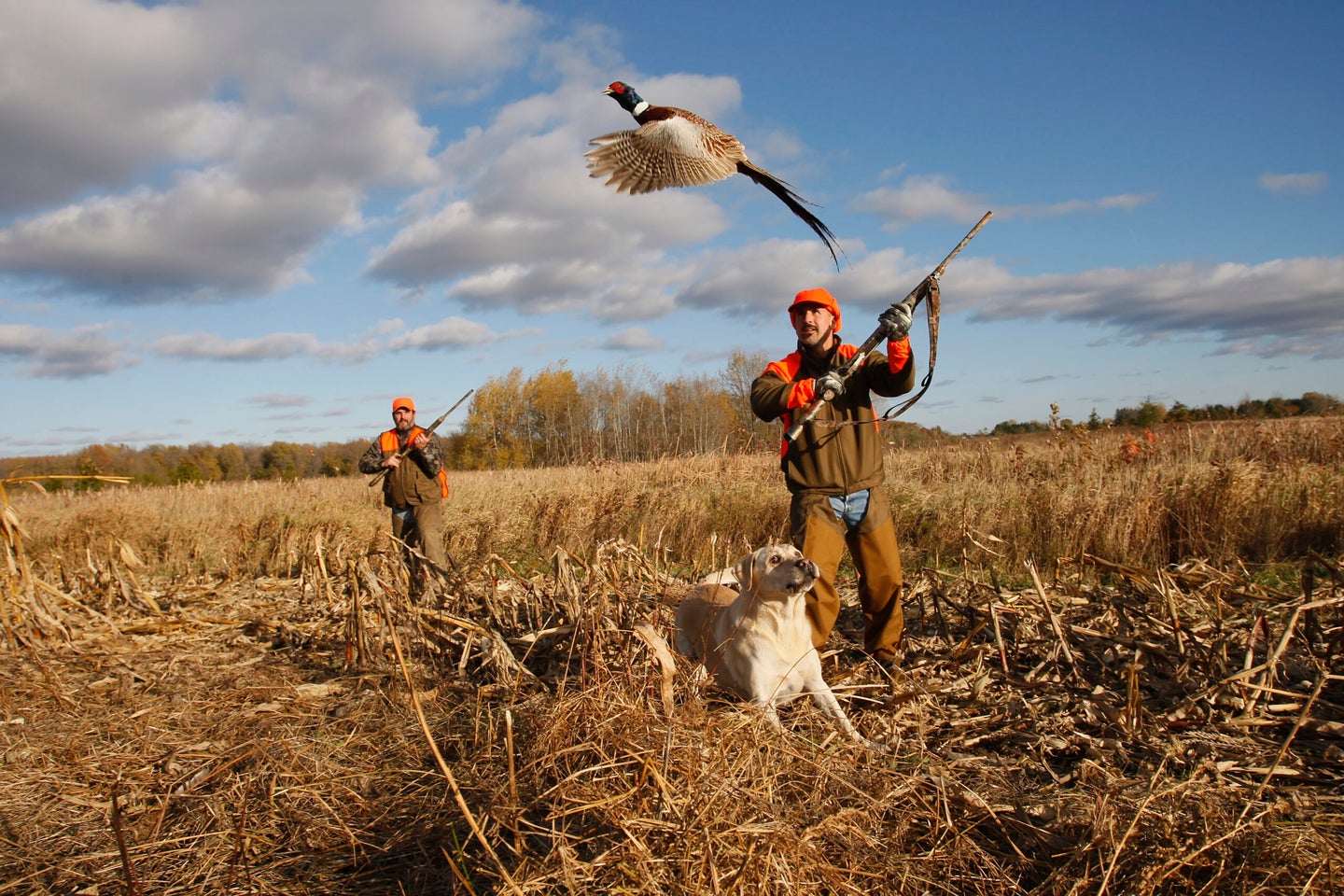 Big and showy, pheasants wear a convenient white target around their necks and often flush close. We shouldn’t miss them. We all do. For one thing, that raucous flush unnerves hunters, and they shoot in a panicked rush. Once airborne, pheasants are faster than they look in the wide open spaces where they live, sometimes hitting speeds up to 60 mph.

And, not every shot at pheasants is a straightaway on a bird that launches from the grass beneath your feet. Pheasants give you a variety of shots that we can break down into five basic chances. Here’s how to make them all:

1. The Going Away Shot

The bird that flushes close is one of the most made, and missed, shots in pheasant hunting. It’s startling, but remember, the first thing you have to do is positively I.D. the bird as a rooster. Take that instant to gather some composure and move the gun to a ready position, muzzle in the direction of the bird, stock tucked under your arm. Now you’re prepared.

You have lots of time on this shot. Most people who miss it rush. Before you throw your gun to your shoulder, look at the bird. Let it get out a little bit so your pattern can open up. Try to get your eyes on the head, then make the first move pushing the gun towards the bird so you don’t snag it in your armpit as you raise the stock to your face and shoot without riding the target nor aiming at it.

The pheasant that flushes twenty or more yards away not only adds distance to the problem, but often a quartering angle, too. On the plus side, not only does this bird have a target on its neck, it has a long tail streaming out the other end that conveniently helps you read the angle. Swing the gun through the tailfeathers, the body, up to the head, and pull the trigger as you pass the ring. Keep the gun below the bird so you can always see it, and think of moving the gun just fast enough to catch and pass it. One of the big causes of missing is swinging the gun too quickly.

If the bird flushes wild and flies straight away, it’s the same shot as the bird at your feet, but it requires a smaller, subtler move. That straightaway also demands judgment on your part. I’ll take long crossers but will pass up straightaways over about thirty yards, as the bird’s vitals are shielded and it’s easy to cripple a long straightaway bird.

3. The Crosser Down the Line

The bird that flushes, then turns to run the gauntlet by crossing in front of the line, may not be the most-missed bird, but it’s definitely the one that gets the most shells thrown at it as everyone in line takes a crack at it. When it gets to you, you’ve got three choices: swing through it from behind; point the gun at the beak and pull in front to get your lead; or, start the gun in front of the bird, match its speed, and shoot.

All of those methods work. In all three cases, you have to move the gun slowly and keep it just below the line of flight. And, most important of all, you have to keep your eyes on the bird’s beak even as the gun drifts out in front. That’s hard for many people to do, since the natural tendency is to aim down the rib. Doing that leads to shooting behind, which is why those crossing roosters get away so often.

4. The Mass Flush at the End of the Drive

In the traditional hammer-and-anvil pheasant-hunting maneuver, the line of walkers moves toward waiting blockers, trapping birds in between them until there’s a mass flush of birds going in all directions. There are also a lot of people in a small area right now, so remember safety first. Keep your muzzle up, and only shoot at birds if you can see sky below them.

If one pheasant flushing can discombobulate a hunter, twenty birds in the air can be pure sensory overload. Pick a bird, preferably one without a hen next to or behind it. Find the bird, find the white ring, shoot, and stay with it for a second shot if you miss. Resist shooting more than twice. Third shots rarely succeed, and that way your gun is still loaded if an easier bird presents itself. There are usually stragglers in those big flushes and you’d hate to be standing there with an empty gun.

Read Next: Dial In Your Shotgun, Choke, and Load Before the Season

5. The Rooster in the Woods

Sometimes late-season snow and cold push grass-loving pheasants into wood lots and creek bottoms where they can find shelter in brush and blowdowns. The birds will sit tight, and often rise steeply to get up and out of the trees. For some reason, roosters in the woods are my pheasant-shooting weakness, but the shot shouldn’t be as difficult as I make it.

The lead is over top of the bird, and you have to blot the pheasant out with the barrel so you can’t actually see it when you pull the trigger. The range should be close enough that all you have to do is bring the gun up, cover the head, and shoot. It really is that simple, even if it gives me fits.