The Off-Season Archery Practice Regimen You Have to Try

Was your bow season marred by bad shooting? Try this new take on blank-bale practice that cured the author's target panic and promises to put you back in the 10-ring 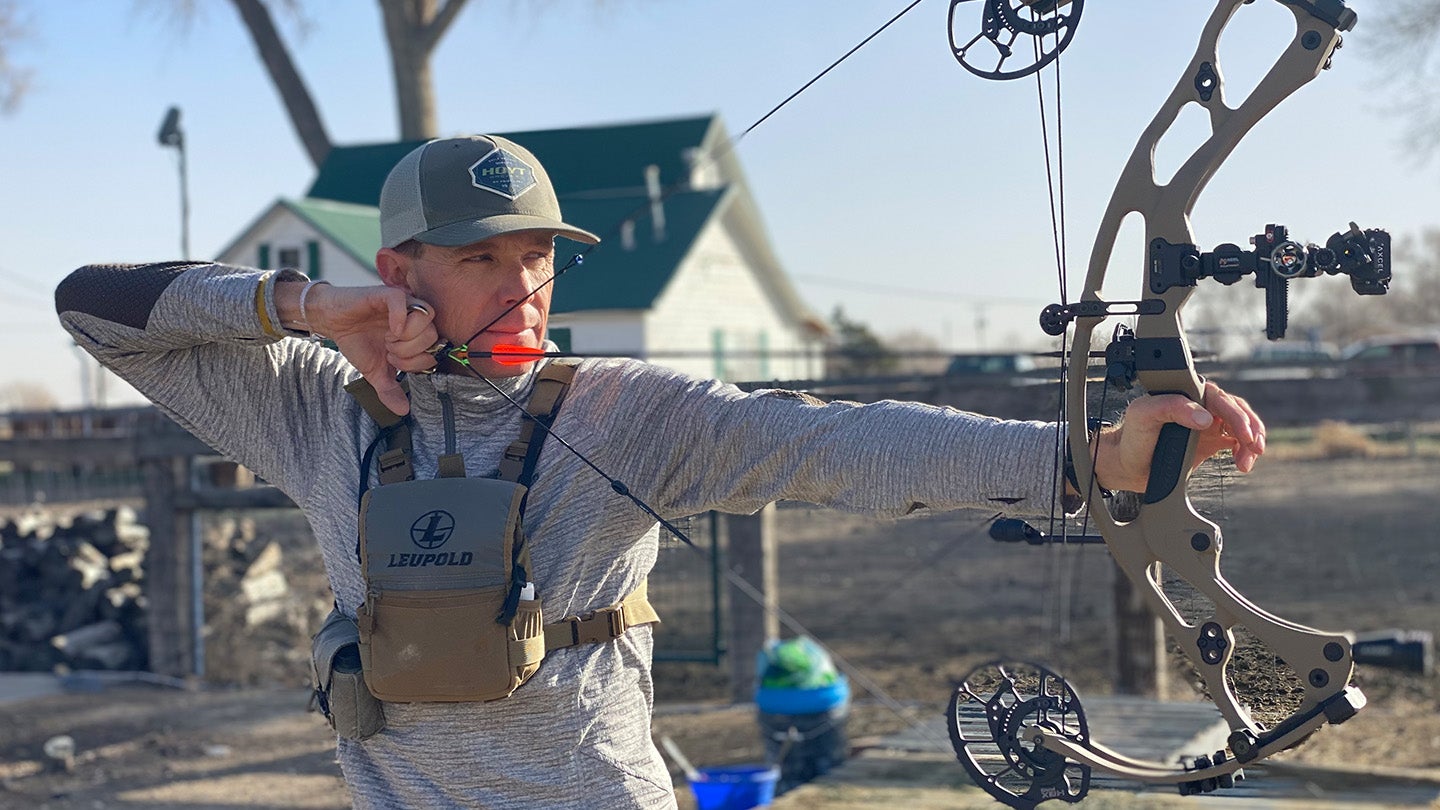 The author practices his off-season blank-bale routine in his back yard. Jace Bauserman
SHARE

Big-game archery seasons are a distant memory for most of us now, so it’s a good time to evaluate. How’d things go for you? Be honest. Was it a year of good shots and short blood trails? Or was it a season marred by misses or poor hits? If it was the latter, you’ve got some serious work to do—first because making clean kills is serious business and second because, well, what you’ve been doing obviously isn’t working.

I know. I’ve been there. My target panic and resulting field performance got so bad at one point that I almost hung up my bow for good. I was desperate enough to try something a little out of the box, and it has made all the difference. For the past three seasons now, I’ve been using the practice program below religiously, and aside from one clean miss on a pronghorn, I have taken 17 animals cleanly with 17 arrows. I’m not billing this as the new target-panic cure-all. Every shooter is a little different. But if you’re struggling to the point where it’s affecting your passion for the sport, then you have to try something different—and this may be just the thing.

A New Twist on an Old Archery Drill

You probably already know what blank-bailing is. Archers have been using the drill for decade to tame target panic, and it has worked well for many. The process is easy. You stand 5 or 10 yards from a target with no visual aiming points, draw, and let the sight pin float on the blank block or bag. Then you just let the release fire the bow. (More on this below.) The idea is that with no dots or scoring rings to shoot at, the mind will relax, and the shooter won’t feel the anxiety that comes with trying to hit an exact spot on the target.

The problem for me, and I suspect plenty of other archers, is that the benefit of this has never really transferred over to targets with aiming points, whether that’s a block or a 3D target. I’ll follow the basic blank-bale routine for weeks, shooting hundreds of arrows at 5 and 10 yards, but as soon as I step back to 30 yards, the distance combined with the desire to hit the dot or 3D ring causes me to panic and slap the trigger. All that work for nothing.

Then one day, after making a shaky first shot on a 3D target at 30, I knocked another arrow and sent it instead toward my blank-bale target, which is a basic foam block painted all-black. That did it. My shaft hit the center of the center. I was relaxed, and I let my release fire the bow.

Eventually, I worked out a weeks-long routine of blank bailing from 10 yards out to 120, and I’ve found that over time, the benefits do transfer over to targets with aiming points. Here’s exactly how to do it, in five steps.

The first step is the easiest. Just get a can of black or white spray paint and cover one side of a foam target face, or cover the face with construction paper.

Stand 10 yards away and send one arrow at the blank target face. Focus hard on every part of your shot process. Develop a repeatable routine for getting into your grip, addressing the target, drawing your bow, crawling into an anchor, and letting your pin float on the target. With no visual reference points to aim at, relax, breathe, and fight for the target’s center. Focus on the act of aiming rather than the act of shooting. As your mind calms, push into the riser with your bow hand as you pull into the bow’s valley with your release hand. Suddenly, the shot will break, and it will scare you a bit because you’ve given up control and trusted a process. (This is what I mean by “letting the release fire the bow.”) It will also surprise you, because your arrow will be in the target’s center.

Don’t shoot another arrow, not even one, until you walk up and pull the arrow you just fired from the target. If you leave the arrow in the target, your mind will find the arrow’s nock, and just like that, you have an aiming point. This is a one-arrow-at-a-time process, so wear good shoes for walking back and forth.

Repeat at 10 yards until you feel comfortable with that distance, and then move back to 20. The process stays the same. Shoot at the same blank target. Go through your steps, and let your pin float as you fight for the target’s center and finally let the release fire the bow. For now, don’t worry too much about where the arrow hits in relation to the target’s exact center. Instead, use the time walking to get each arrow to go over the shot process in your mind, breaking down what went right and what went wrong.

Step 5: Shoot for a full month.

As you get comfortable at the new distance, move back another 10 yards until you eventually reach the maximum range you want to practice at. For me, it’s 120. But even if yours is half that, continue to blank-bale in this way for a full 30 days, and I do recommend shooting every one of those days. Then you can try a target with an aiming point—and enjoy the results.

I start with this routine every spring and am always amazed at what a difference it makes once I’m done. My shooting confidence grows exponentially, and when I switch over to 3-D targets and spots on other targets, the anxiety is gone. When the shot breaks, the arrow seems to find its mark. It’s a remarkable feeling, and once you experience it, you’ll want to feel it more often, which makes you shoot more. In the end, if you’r results are anything like mine, you’ll become a better archer and a better bowhunter than you thought possible.