Panel Scored: Brian Butcher Buck Is Officially the No. 2 Non-Typical Whitetail Bow Kill of All Time

Covid postponed the panel scoring of this crazy non-typical rack. But now it's official. Butcher's buck netted 321-3/8, making in Pope and Young's new No. 2. 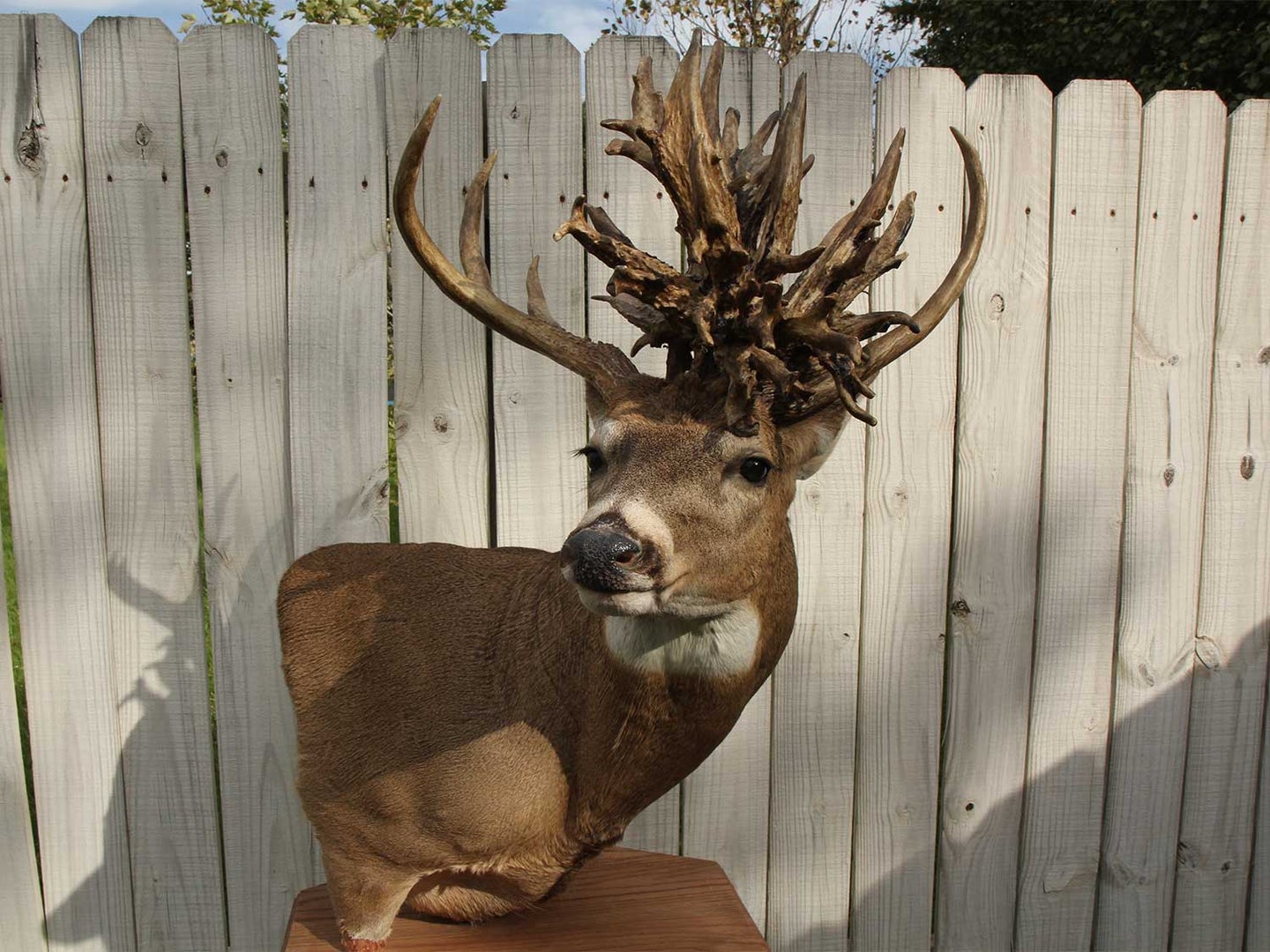 It’s one of the craziest racks you’ve ever seen. The left side is a normal enough, but the right is a mass of jumbled points sprouting from the buck’s head like some giant, spiky mushroom. It’s also one of the biggest whitetails to wear a tag, and last weekend at the Pope & Young Club’s Annual Convention in Reno, Nevada, the Kansas monster was officially panel scored and confirmed as the second-highest-scoring non-typical whitetail ever taken by a bowhunter.

Thanks to Covid, the ultimate announcement was a long time coming for Kansas bowhunter Brian Butcher, who arrowed the incredible buck way back on October 10th of 2019. When he first spotted the monster from his stand, Butcher could see it was a huge deer, but it seemed to have something wrong with its head, like there was a tumbleweed stuck in its antlers. But as the deer closed to 25 yards, he realized it was all bone, and he made good on the shot.

“I was blown away,” he told Field & Stream last year. “I knew it had a bunch of antler when I shot, but I had no idea the number of points or the magnitude of it. I’d never seen anything like it. When Butcher got the buck home and friends showed up to see the beast, they almost couldn’t believe it was real. “We were trying to count points and came up with 30—then 40, then 50. I thought it was a 200-inch deer, but I didn’t know. Bowhunters dream of a 200-inch deer.”

Initial green-score measurements put the buck at over 340 inches gross, and 316 net. Still, there was some concern that the deer could not be officially measured or eligible for the record books because of the Boone and Crockett Club’s “Freak Trophies” policy, which states that antlers without a discernible main beam can’t be measured using the B&C scoring system. But after due consideration, the scoring committee voted to score the buck, and on Jan. 3, 2020, Butcher’s deer taped out to 343-4/8 gross and 321⅜ net. That official entry score made Butcher’s buck the presumptive No. 2 bow kill of all time, just behind Luke Brewster’s 327-3/8 P&Y world record, as well as the second largest hunter-killed buck in the B&C book and B&C’s No. 4 non-typical overall.

Finally, when the convention doors opened last weekend, Butcher was in attendance. “I didn’t find out the numbers until I got here,” Butcher told Bowhunter magazine. “I checked into the hotel, got settled in for a few minutes, and then went to the convention center and saw it there.” His buck had been panel scored and was on display, its ultimate score identical to the entry measurement, unaltered by even an eighth—and officially the new No. 2 bow kill of all time.

“I didn’t expect that,” Butcher told Bowhunter. “I thought the score last year…would be pretty close, but I didn’t expect it to be completely unchanged. I couldn’t feel luckier about it all.”

You can read the full story of Butcher’s hunt and his incredible buck here: The Biggest Buck You’ve Never Heard Of