Deer Guide Secrets: Why You Should Be Scouting for Big-Woods Bucks Right Now

Pennsylvania whitetail guide Steve Sherk shares his 4-step winter scouting plan, and explains why it's so critical to his success on big-woods bucks 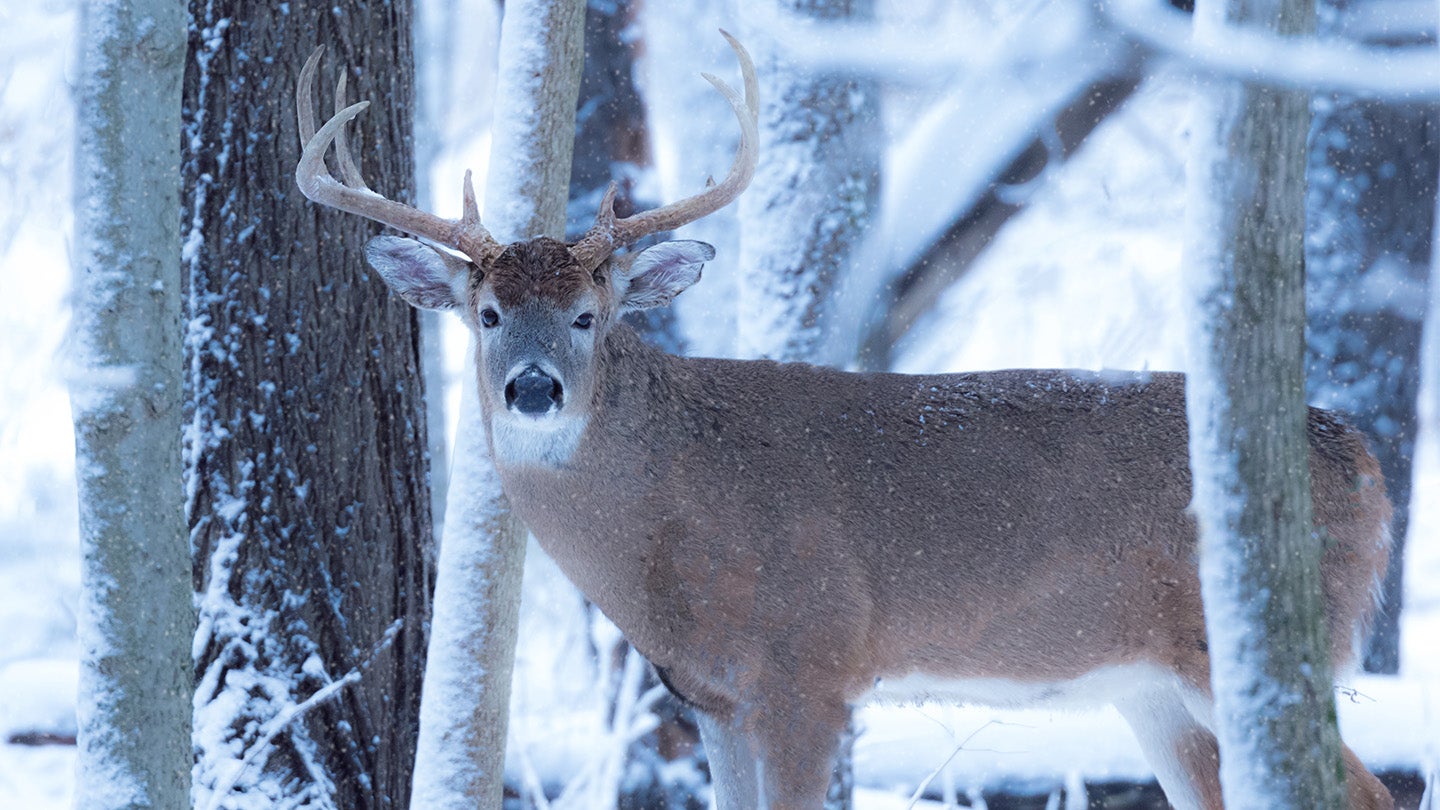 If you’re suffering from the post-deer-season blues right now, you’re doing it wrong. That’s the mindset of Steve Sherk of Sherk’s Guide Service, who hunts and guides for the big-woods whitetails of Pennsylvania’s Allegheny Mountains. “In my mind, we’re in the first—and one of the most important—parts of the new deer season right now,” he says. “Sure I don’t have a bow or rifle in my hand, but the time I spend in the woods in the weeks ahead is what makes success during the fall possible. I feel like it’s opening day.”

Sherk, who runs a landscaping business and plows snow when he isn’t guiding hunters, spends every available minute scouting in the off season. “It’s critical for hunting success here, as the deer densities are relatively low,” he says. “I’m almost exclusively a tree-stand hunter, and that’s how I guide as well. I’m not going to see the number of deer someone in farm country does. So scouting gives me the confidence to stick with it in the time between deer sighting. Stand hunting here is a mental game; there’s always going to be that little nagging voice that says I’m in the wrong spot, but if I’ve put in my time scouting, I’m better at ignoring that voice.”

Also, learning more about big-woods deer and their unique habitat is simply something he enjoys. “I absolutely love to scout year-round,” he says. “I’ve been hunting these mountains since I was a boy, and while I’m much more familiar with the deer and the country now, I’m still constantly learning something new, and it never gets old.”

Bleow is Sherk’s four-point plan for scouting big-woods deer in the off-season. Most of lessons can be applied almost anywhere, although–and apologies to our Southern friends–some of them do require snow.

Think you’re a trail-cam nut? Sherk runs 150 cameras, most of them year-round. “Sure that’s a lot, but I’m literally scouting hundreds of thousands of acres,” he says. “Many of my cameras are a mile or more back off the road, and I learned in a hurry that it’s just easier to leave them out in good spots for a long time, rather than continually move them around or run in to check them all the time.”

While Sherk admits that his cameras are often less active this time of year, that does not diminish their importance. “I see pics as a major database on buck activity and behavior that’s in a constant state of flow,” he explains. “Every buck pic I get, regardless of the time of year, tells me one more thing about the deer that I didn’t know before. The advantage of having a lot of cameras out is that I learn places in a buck’s home range where he might feel more comfortable moving in daylight. Those areas are where I probably have the best chance of killing him.”

In some spots, Sherk has had a camera on the same tree for three or four years, soaking up intel. “This time of year, I like to keep cameras on travel corridors between bed and feed, and on the edges of winter bedding areas. It can take some time and experience to learn the best winter feeding areas, but here deer are usually focused on evergreen stands like pine or hemlock, low on the mountain. How much they travel to feed depends on the severity of the winter; we’ve got a lot of snow this winter and it’s been cold; in my experience, bucks just don’t feed as heavily in conditions like this. Their survival method is to find good cover and just not move much, in an effort to save calories. So that’s where I’ll put some cameras.”

2. Find Sheds in the Beds

Scooping up a buck’s antlers provides another clue in Sherk’s quest to locate and kill big bucks, but the mountain hunter often finds cast antlers where others don’t: in buck bedding areas. “In a tougher winter like we have now, bucks just don’t move much,” he says. “I typically find multiple bucks using that evergreen cover and resting up. But of course they have to get up and feed and move around some, and one of the first things a buck does when he gets up out of his bed is to shake himself and when his antlers are ready to come off, that’s often when it will happen. I’ve found multiple matched sets lying in or near a buck’s bed.”

Sherk uses cameras placed on the edge of bedding areas to track the progression of antler shedding. “Obviously I’m not going into bedding areas and disturbing bucks while they’re at a vulnerable part of their year,” he notes. “But if I monitor cams on the edge of their bedding areas, I’ll know when most of the bucks in an area have shed. Then I’ll hike in and start looking.” Sherk also maintains cameras over mock scrapes year-round, and since bucks visit those sites throughout the year—even after they’ve shed—cameras will reveal when it’s a good time to start searching for antlers.

3. Get Out and Burn Some Boot Leather

The Allegheny Mountains are vast, and with low deer densities, buck home ranges expand. Consequently, Sherk learned early on that the more familiar he was with large tracts of land, the more success he’ll have. “I’ve been walking these mountains for well over 20 years, and I still find spots I’ve never been to before,” he says. “The best time to learn those new areas is right now, when you don’t have to worry that spooking a buck will affect your hunting success. While apps and online maps are excellent tools, nothing beats getting your boots on the ground and learning the land. Those apps can tell you about topography, for example, but they can’t tell you that a certain ridge grows oak or beech trees, or if one travel corridor has more rubs in it than another that looks just like it. The only way you find out about those spots is to walk in them.”

While some of Sherk’s setups are relatively close to a road or trailhead, he’s aggressively searching for places other hunters fear to tread. “Big-woods bucks are very sensitive to human intrusion and learn in a hurry where they don’t get bothered very often,” he says. “So I’m always looking for spots that other hunters might not want to go, whether it’s because of distance or difficult terrain. Every year in the off season I’m trying to add another spot that I either didn’t know at all, or very well. It’s also really important to walk your familiar ground, too, because things can change from year to year.”

In a world where food plots aren’t an option and ag land is miles away, knowing whitetail food sources is even more critical Sherk says. “Deer here are largely browsers, and they live off the same natural food sources they always have. It’s illegal to bait here, so learning what deer eat and when they prefer certain foods is everything. Even during the rut, when bucks are focused on breeding, they are running between groups of does, and those groups are always going to be on the best food source in the area. Now is the time to learn the potential feeding hotspots come fall.”

Top on the list for Sherk are hard mast sources, such oak and beech stands. “I’m keeping an eye out for oak stands everywhere I walk,” he notes. “They don’t have to be big to be important. In fact, sometimes a small clump of red oaks in a tract that has very few can be a huge find in a good acorn year. I monitor oak stands into the spring, to make sure a killing frost doesn’t nip oak buds and kill the acorn crop. Usually by June I’ll know what kind of acorn year we’re going to have.”

Logging is a recent and welcome browse-creator in the Allegheny’s according to Sherk. “For many years we had no, or very little, timber harvest here,” he says. “But it’s picked up in recent years and now creates browse that deer focus on. I keep lists of logging areas and which are in the right stages to provide food, cover, or both to deer. This is an ideal time to start or update a list like this.” If you hunt big-woods deer, there is simple no amount of off-season scouting that’s too much, he stresses. Every time you go out, you might find that one piece of the puzzle that helps you fill a buck tag come fall.