While shed hunting this spring, Brandon Mann discovered locked-up dead-head bucks that told of a battle to the death 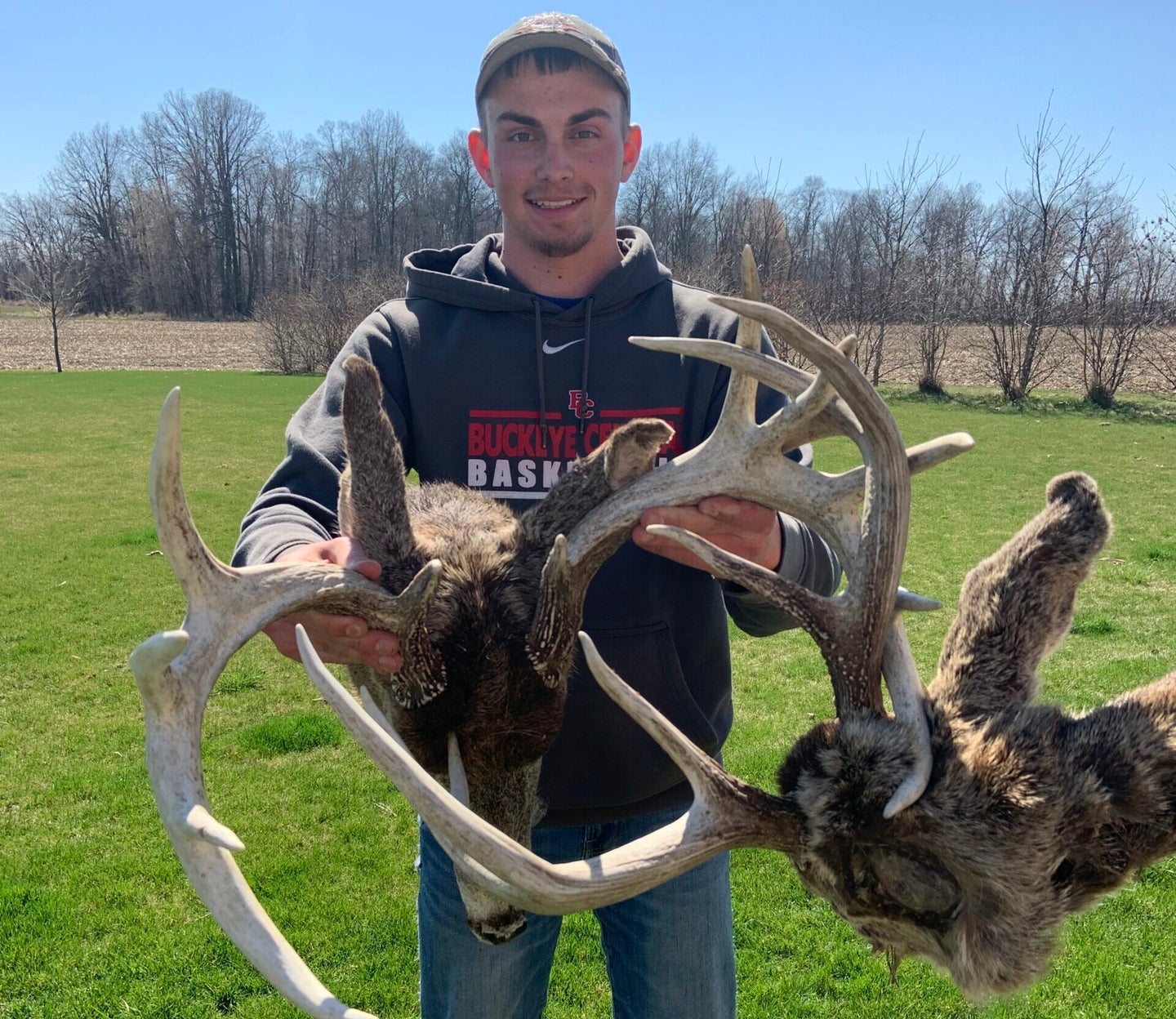 Brandon Mann capped a landmark shed hunting season with a once-in-a-lifetime find, scooping up a pair of dead-head bucks that had locked antlers in a late-season brawl. While buck battles rarely end in death, locked-up dead heads can be even more scarce. Mann puts in a lot of miles Mann each spring and he knows the of bucks in his area well. But still, finding the aftermath of a whitetail fight to the death is something of a lightning strike. Here’s the story of his incredible find.

Mann actually knew both of the bucks involved in the deadly fight and had been looking for their sheds of each all spring. “I had seen both bucks on this property during the winter, out feeding,” he said. “I had shed hunted the property a few times already and was kind of surprised that I hadn’t found a shed from either buck yet. Finally I searched an area where I hadn’t looked, and that’s where I found them.” Mann scored the bucks himself and said the larger deer grossed 145 inches and the smaller one, an 8-point, grossed 120. He plans to keep the antlers locked and have a European mount done. “I’ve been offered money to buy the locked racks, but this is special to me and not something I’m parting with.”

Mann says that both bucks were 3½ years old and had great potential. “The bigger one was a 6X5 that was often on a property I hunt a couple miles from where I found the locked-up bucks. I had several trail-cam pics of this buck and, while I knew he needed another year to be really good, I definitely had my eye on him. And I actually have one shed from the smaller buck from last year.”

Mann’s incredible find capped off an amazing 2021 shed season. “I walked over 200 miles this spring, and I found 79 sheds and seven dead-heads,” he says. “It’s been a shed-hunting season like no other.”

Bittersweet Ending for a Deer Hunter

Mann’s locked deadheads was a bittersweet discovery, however. While incredibly cool and rare, the find also meant that two great bucks would never live to see their potential. Still, the hard-working shed hunter has plenty to anticipate this fall. “The first sheds I found this year was the matched set from a buck I call ‘Redemption’” he says. “He is a big 10-point, and in November of 2019 I had one chance at him but my shot was low. He made it through and last fall I vowed I would only tag him, or a buck at least that good, or nothing. Well, I had him within 40 yards six different times and could just never get a good shot. Finding his matched set was an amazing start to the season. This buck is 6½ years old and his sheds are over 171 inches.”

The buck Mann had to “settle” for last fall was no slouch. “On November 7, I went to a stand for my 58th sit of the year,” he says. “Another good buck showed up, locked down on a doe a couple hundred yards away. I decided to sit the rest of the day in hopes of getting a better look at him. I wasn’t in the stand more than two more hours when I caught movement to my left. It was the same buck, and he was coming right to my stand on a trot. He came to within 15 yards, and I stopped him and made the shot.”

The buck made it 60 yards and tipped over. He was a main-frame 8-point with a few stickers and he grossed 171 inches. “So, I didn’t get Redemption last year, but now that I have put his antlers in my hands, I know I have a lot to look forward to for this bow season.”