Brandon Hill arrowed "Junior" in mid-November. He says the 185-inch buck is the offspring of a monster whitetail he hunted six years ago 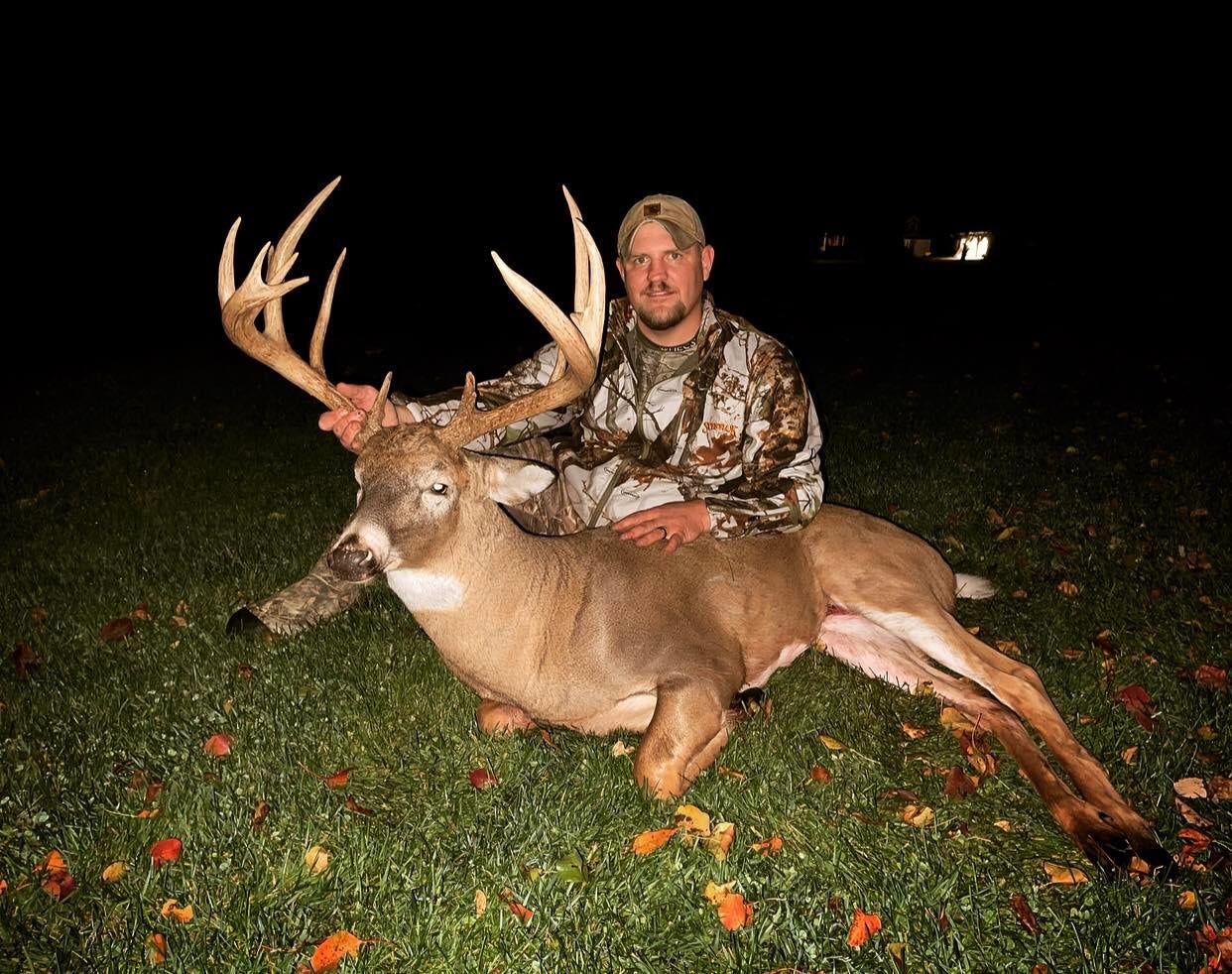 Ohio bowhunter Brandon Hill has taken several big bucks. But this season, when he arrowed a huge whitetail he’d named “Junior,” he says it was as big a thrill as when he took his first deer. “We had two years’ worth of pictures of this deer,” he tells F&S. “From last year to this year, he made a big jump on mass and acquired more junk with a double crab claw at the end of his right main beam.”

But Junior wasn’t special just because of the size of his rack. There was also the frame’s basic shape and configuration, which convinced Hill that this buck was the offspring of another monster dubbed “Heavy Duty” that he’d hunted in 2015 and 2016 but was never able to connect on.

This season, Hill knew that Junior, which he estimated was 6-1/2 years old, would likely reach the Boone & Crockett minimum standard. He just had to figure out a way to put a tag on him. He hunted the deer on and off during the pre-rut and rut, and eventually crossed paths him on November 16.

“I knew from last year’s trail-camera pictures the this deer was a heavy mover on big cold fronts,” he says. “The 16th was one of those fronts.” The temperature hovered in the mid-40s, and Hill decided to take most of the day off from work. He got to his tree stand around midmorning and settled in for the remainder of the day. He had a gut feeling and texted his wife to tell her that he had high hopes for the afternoon hunt.

Hill’s stand overlooks a logging road that cuts through mature oaks bordering a thick bedding sanctuary that he says rutting bucks love to travel. Around 11:30 a.m., he spotted a young, 130-inch 8-pointer come through the hardwoods. The buck walked with its nose to the ground the entire time, and passed by about 25 yards from the stand.

A few hours later, two does walked by. At 4 p.m., he heard leaves crunching behind him. A doe emerged first. Then, he heard more leaves rustling behind her. “I heard heavy hoofs crunching about 80 yards behind me,” Hill says. “I knew there was a buck behind her but didn’t know which buck yet. I sat motionless as she stared back behind my tree.”

Hill slowly looked to his right, and immediately recognized “Junior.” But he didn’t have a shot. The buck stood there for several minutes, waiting for the doe to move. Eventually, she turned toward the thick cover, and the buck followed her. Hill drew just as the buck passed by his tree stand, stopped it for a shot, and took the 5-yard opportunity.

“I sent the arrow through the sweet spot,” Hill says. “He kicked, barreled out, and after a 90-yard death run, got wobbly and crashed.”

Hill called his father and joked, “Why would I be calling you?”

“You killed him?” his father asked.

Next, he called his wife.

“I guess you were right about your gut feeling today?” she told him.

He sure was. “This deer means a lot to me,” Hill says. Even though I couldn’t seal the deal on Heavy Duty, now, six years later, I was able to get it done on his offspring.”