Austin Cory arrowed one of the rarest, most interesting whitetails of the 2022 deer season 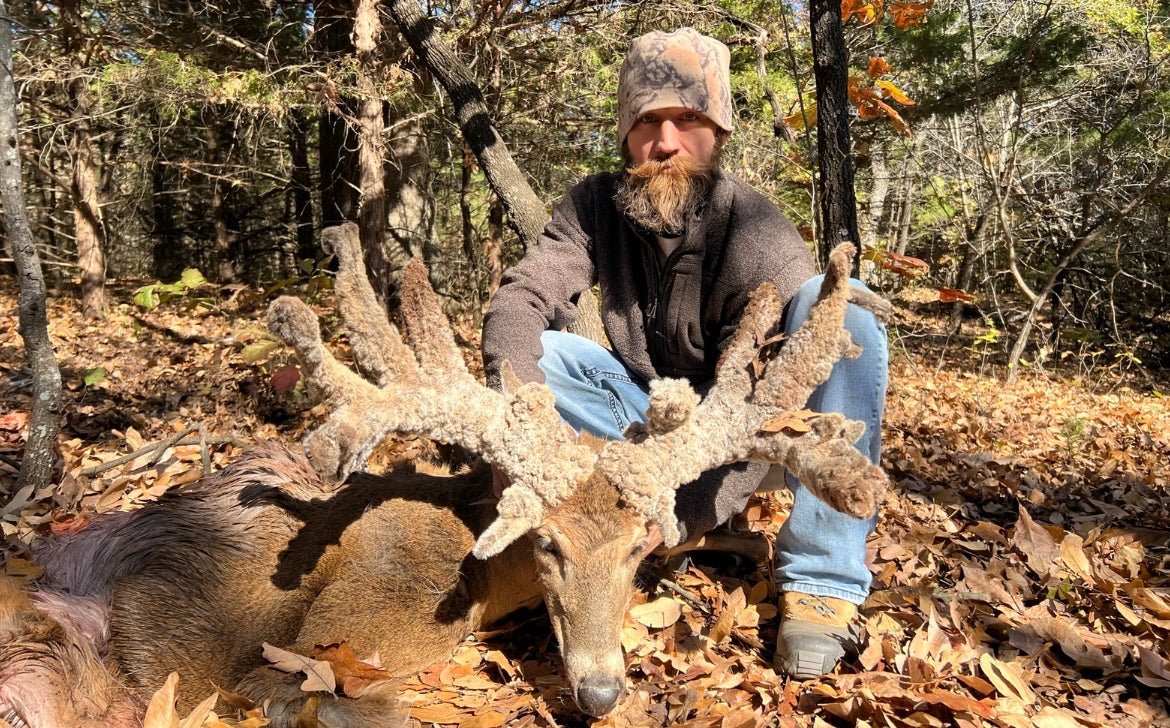 Austin Cory hunted this buck for two seasons, and finally, after more than 60 sits throughout two years, he tagged it. Austin Cory
SHARE

On November 15, 2022, Austin Cory of Oklahoma arrowed a cactus buck that will go down as one of the most interesting whitetails of the 2022 deer season. The story begins in 2016, when Cory’s friend, Cameron McBride, and Cameron’s father first captured photos of the strange-looking buck. Each year thereafter, the old buck would spend every waking daylight hour in a bottom where the wind swirled. And no matter how McBride and his father hunted the deer, they couldn’t get a shot.

Out of the two McBrides, Cameron’s father hunted the buck the most. But in 2020, he sadly passed away after a hard-fought battle with covid. Later that year, Cameron started hunting the cactus buck, and he eventually had a chance to kill him, but he shot over the deer’s back.

After his miss, Cameron decided he needed some help. He asked his friend Austin Cory to start going after the deer, too. They started trying to figure the deer out together. And eventually, they came up with a plan—get the buck up out of that bottom.

Related: What Is a Cactus Buck and Why to They Grow Such Funky Antlers?

The Two Hunters Form a Plan

Due to the cactus buck’s low testosterone levels, he didn’t participate in the rut. So, the two hunters had to find another angle of attack. The bottom surrounded a piece of high ground on three sides. Cameron and Cory decided to lure the buck to the high ground with food to get the deer away from the swirling winds. After two years of running cameras, patterning the deer, and tweaking setups, it worked. They put out numerous types of bait in hopes of finding something the deer would like. When they put out Sugar Beat Crushed, the buck came out of hiding.

On November 14, 2022, a cold front came through with wind and hail. The buck appeared on a trail camera during daylight. The next day, Cory used the fresh intel to move in and hang a new treestand. He finished around lunchtime, went home, showered, and returned for the afternoon hunt.

Around 2:45 p.m., Cory settled into his stand on the high ground. At this point, he’d hunted the cactus buck for about 60 days throughout two seasons. And in all of those days, he’d never seen the buck on the hoof.

Corey Gets His Shot

If the deer was still down in the bottom, he could only come to Cory’s stand from one of three directions. At about 4:50 p.m., a doe walked into the open. Soon after, another doe followed. Then, a third doe did the same. The three deer milled around for about an hour. Then, at 5:40 p.m., the cactus buck showed up. The deer slowly fed toward Cory’s position. By 5:47, the cactus was standing broadside, 15 yards away. Staring at the opportunity of a lifetime, Cory came to full draw, settled the pin, and took the shot.

Read Next: What is a Cactus Buck and Why Do They Grow Such Funky Antlers?

After waiting a few minutes, Cory descended and retrieved his arrow. It was covered in lung blood. He gave the deer some time and started searching. He didn’t know it at the time, but the deer ran about 300 yards. Cory didn’t recover it until the following morning. That’s when things started to sink in.

“It was emotional,” Cory says. “You put so much time and effort into one buck. And then it comes to fruition, and you get it done. It’s a sense of accomplishment. It’s the most rewarding thing. It’s surreal.” The buck is in the process of being scored. The hunters guess the deer to be eight to 10 years old.