Arkansas Hunter Arrows Public-Land Booner, Thanks to His Hunting Buddy

Josh Hogue's best friend initially found the big typical. On a morning when he couldn't hunt, he told Hogue to go put a tag on him. And he did. 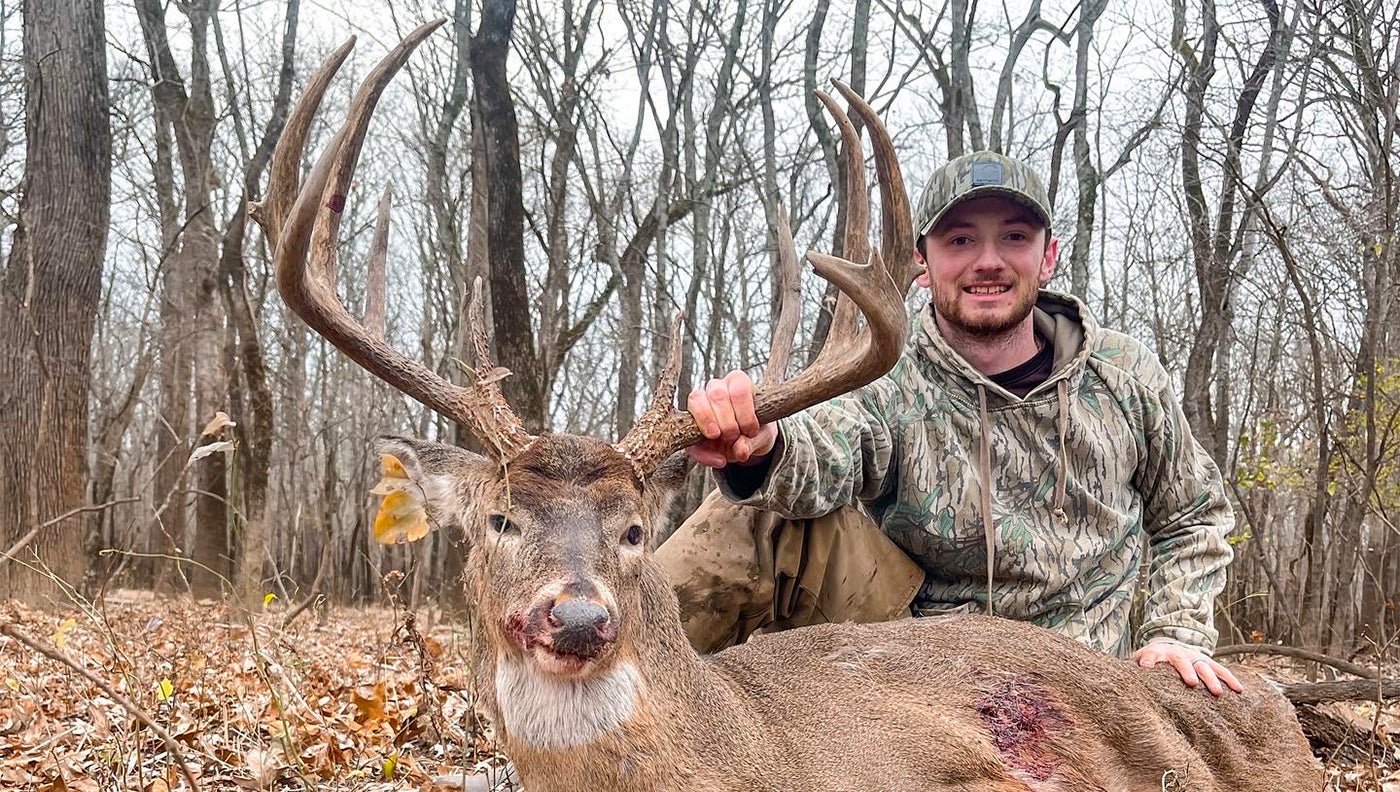 On December 16, Josh Hogue put his buck tag on a giant public-land whitetail. But it was his best friend who initially spotted the deer in early December and at one point had the buck at 80 yards—not quite close enough for a good bow shot. Thanks to his buddy’s generosity, though, Hogue was able to have his own, much closer, encounter with the big typical.

Because his buddy initially located the deer, Hogue was happy to give him first stand selection each time they went afield. “My goal the entire time was for my best friend—who found the deer—to kill him,” Hogue told F&S. “I hunted the area but not where we thought the buck’s major corridor was. I stayed on the edges, keeping my wind good for the area, and for where my buddy was sitting. I was hunting spots where that buck could possibly venture, but I was after any good deer that came by.”

The two hunters worked together to learn the area. Trail cameras aren’t allowed on that tract of land, so they couldn’t use those to scout. Both being experienced hunters, however, they were confident they could read sign and terrain to pattern the buck. They scouted and hunted the property for three weeks, eventually homing in on the massive whitetail’s daily movements.

On December 16, Hogue was free to hunt, but, due to obligations, his buddy couldn’t go. So Hogue gave him a call. “I said, ‘Man, please tell me yes or no if you want me to go in there without you,’ And he answered, ‘If I can’t go, you need to be in there. I’d rather it be you than anyone else.” With his buddy’s blessing, Hogue grabbed his gear and headed out.

It’d been raining a lot for the past week, and the river bottom was full of water. Hogue waded through swampy muck to reach his stand location and even had standing water underneath him throughout the sit. Still, he knew the buck would likely travel through the funnel he was set up on.

He settled in and waited for legal shooting light. The weather condition were perfect—cold with a bluebird sky. Mallards and wood ducks sounded off in the flooded timber around him, and he could hear the sound of distant deer running through the swamp. At 7:45 a.m., a buck cut across the funnel, but Hogue couldn’t tell what it was. About 30 minutes later, the giant buck appeared in the same location. It stood at 115 yards for a while—and then walked straight toward Hogue.

The buck closed to within 15 yards but was facing straight on. Hogue came to full draw, waited for the buck to turn broadside, stopped it with a soft bleat, and took the shot. The arrow buried up to the fletching and snapped off. The buck ran 80 yards and slowed down, then stumbled out of sight and fell with a loud crash.

After waiting a few minutes, Hogue climbed down from his tree stand, retrieved his arrow, and followed the blood trail for just 20 yards before spotting the buck’s white belly. “Everyone close to me knew we’d been hunting extremely hard to get this buck,” Hogue said. “So, when I was able to call everyone, it was an abundance of love and congratulations.” The hunters believe the deer was at least 4 ½ years old, possibly 5 ½. It scored 171 6/8 inches.

Hogue was quick to give credit to his wife for holding down the fort at home so he could hunt, and especially to his buddy. “It was a team effort,” he said. “The deer means a lot to me. The miles, struggles, and grit put into getting it done made it so much sweeter. And I was able to go through the whole process of that with my best friend.”