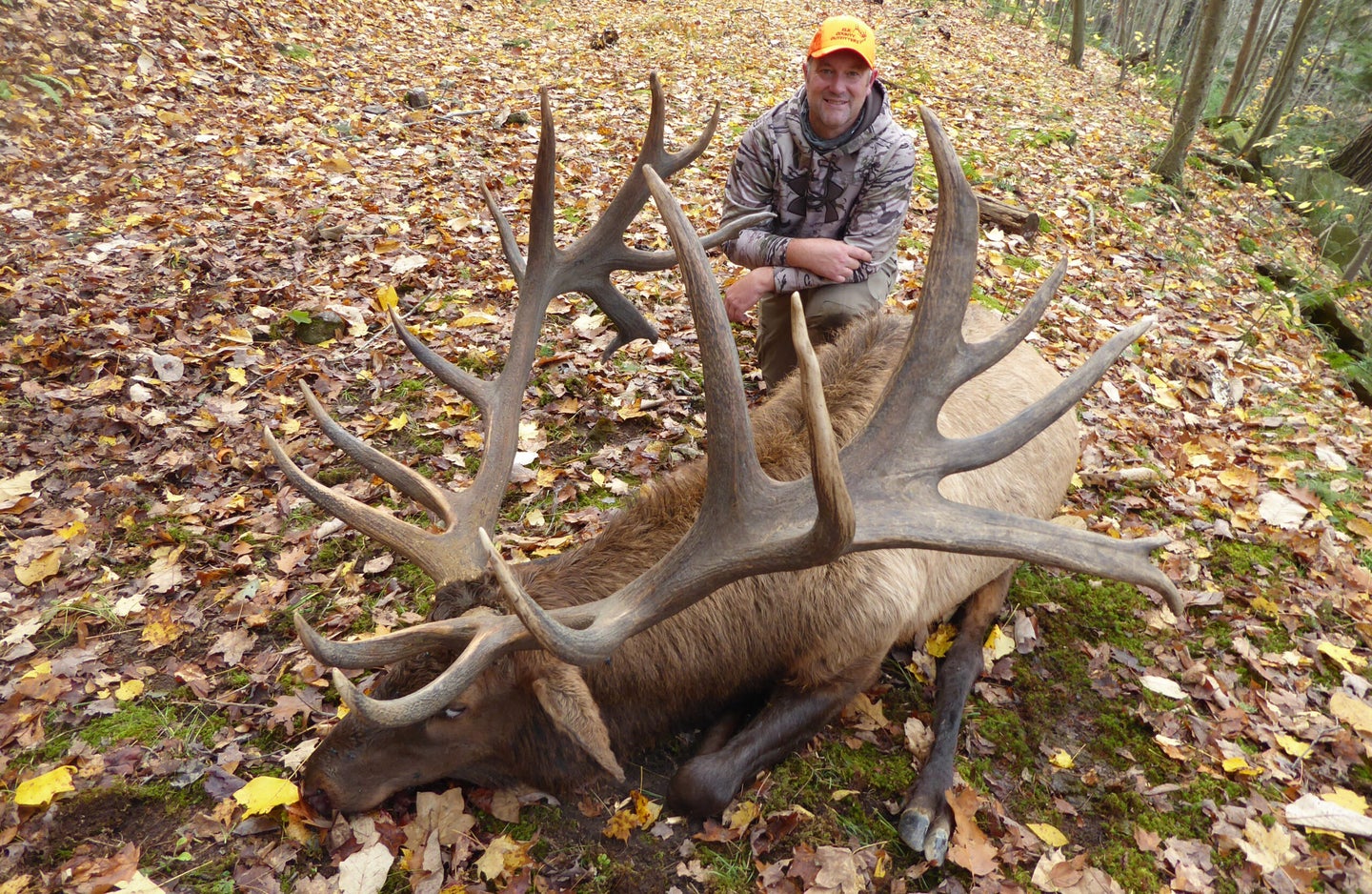 The sixth-largest elk ever killed nationwide was not taken out West. In 2020, a hunter shot a 455-inch trophy bull in Pennsylvania. The animal is likely the largest elk ever harvested in the Keystone State. The hunter, Duane Kramer, a concrete contractor from Bellingham, Washington, has been chasing big game for over three decades.

“I killed my first whitetail when I was 11,” Kramer says. “As an adult, I have entered draws and raffles to hunt for different species in different states. I really love to elk hunt and have killed animals in Alaska, Colorado, and Nevada. I’ve also hunted them in Wyoming, Montana, New Mexico, Washington State, and Kentucky. Up until last year, my personal best was a 390 gross score bull that I killed in Nevada in 2017.” That would soon change after Kramer’s name was drawn from a raffle sponsored by the Keystone Elk Country Alliance, a 501 (c)-3 nonprofit conservation organization.

Pennsylvania is Well-Known for its Trophy Bulls

“I wanted to hunt in Pennsylvania because I knew they had big elk,” says Kramer. “Most of my hunting is Western DIY, but the raffle included an outfitter and taxidermy. Pennsylvania has a tremendous amount of public land, and the state has done an excellent job managing it for hunting.”

Kramer elected to hunt with Elk Country Outfitters north of Altoona. “I live at sea level, so I arrived early to get acclimated to the mountainous terrain,” he says. “My guide had been following the herd that contained that big bull for months. They were about 10 to 12 miles away during the summer and came to the mountains for the rut.

“I had seen several bulls that were bigger than my 390 best, but this bull was enormous. I saw him on the second day, and when he came in he was 18 yards away. I held off because I was shooting a 7mm Dakota with a 180-grain Berger bullet and that wouldn’t have been an ethical shot. I wish I had my bow.”

Kramer got his shot a few days later. “We followed the herd for a few days and would get on them and then lose them, then get back on them, and so forth,” he says. “Sometimes we’d see the bull along the river, other times he’d be on private land, but we just never got the right opportunity. But then we heard a bugle high up on the ridge. I ran uphill about 200-yards, and I jumped a cow that ran downhill. A few moments later the bull came out on the trail and he was 70 yards away. He started grazing, but his vitals were blocked by a tree. I waited until he was finished, and then he turned around and gave me a good shot. I hit him just behind the front shoulder in the lungs.

“After the shot, the bull ran straight toward us and then turned and ran uphill. I found him at the top. Over the years I’ve seen a lot of hunts go awry, but this one came together which makes it very rewarding.”

Kramer has served on the board of directors of his local SCI and Boone and Crockett Club and knows he will have to wait a little longer for certification. A panel of judges will review his animal at the 31st Big Game Awards scheduled for July 21, 2022 to be held at Johnny Morris’ Wonders of Wildlife Museum and Aquarium.