208-Inch Indiana Behemoth Could Be New No. 2 Typical Whitetail of All Time

Dustin Huff's incredible buck is the new world-record typical whitetail taken with a crossbow. Here's the full story of his hunt and lessons you can draw from it 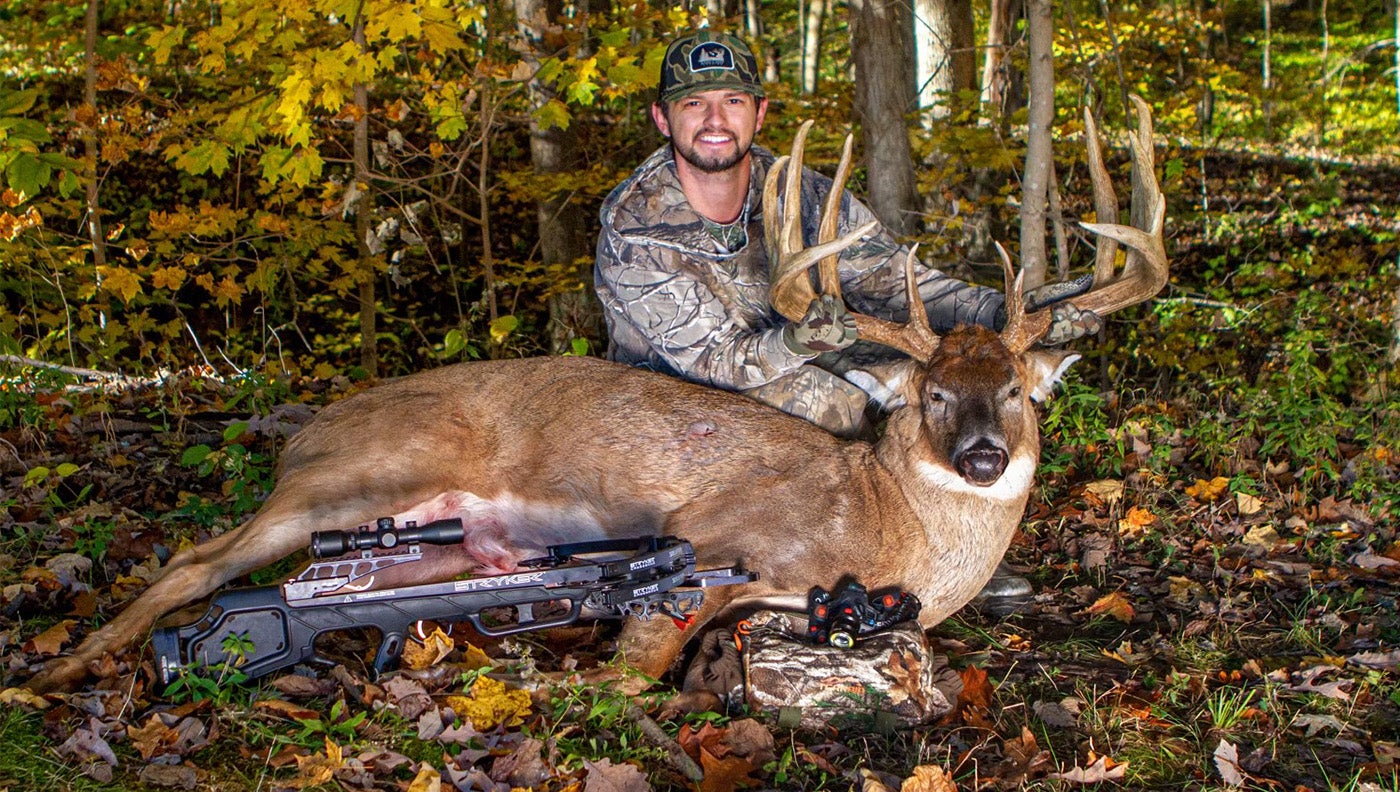 Dustin Huff had been hunting hard but wasn’t seeing any shooter bucks. So, on November 4th, he decided to try something new. He grabbed his crossbow and a climbing stand, walked to an oak flat he’d never hunted before, picked a tree, climbed up…and killed one of the biggest typical whitetails ever taken by anyone, with any implement.

The towering, massive, 12-point buck green-grossed 213-1/8 inches B&C and netted 208-4/8. If these numbers hold up after the required 60-day drying period and inevitable B&C panel score—Huff’s buck will be:

• The new world-record crossbow typical whitetail (using to the B&C measuring system), besting a 201-1/8-inch Ohio buck taken by Brad Jerman in 2004. Had Huff killed the buck with a conventional bow, it would overtake the current 204-4/8-inch P&Y typical world record, held by Illinoisan Mel Johnson since 1965.

• The new all-time No. 2 B&C typical whitetail, bumping the 206-1/8-inch Jordan buck down to third and claiming second only to Milo Hanson’s famous 213⅝-inch world record.

So, yeah, this is one special deer—and one killed by an unassuming young hunter who seems appropriately stunned by his achievement. Here’s his story.

Indiana has no shortage of trophy bucks running around these days, but Huff, a 27-year-old country singer and songwriter and a passionate hunter since boyhood, was not aware that the giant whitetail lived in his neighborhood. “I hunt a 185-acre farm that my dad and I have hunted for years,” he tells F&S. “I killed my first buck there as a boy. The property is about an even split between crop fields and timber, and it’s a beautiful place with a lot of special memories. I started hunting there in 6th grade with my dad. But up until this month, I’d never killed a buck bigger than 130 inches.”

Huff had only one trail camera out and no pics of the huge typical. Other hunters in the area, however, were well aware of the buck. “After I killed him, I learned that a person who lives 8 miles away had a bunch of pics of the deer,” Huff says. “And the guy who hunts the property adjacent to ours not only had some history with the buck, but had a pic of him on October 27. He took the entire following week off from work to hunt him.”

Meanwhile, the 2021 season had been disappointingly slow for Huff. “I was putting in a lot of time as the rut approached, sometimes getting in 10-hour days,” he says. “But all I was seeing were basket-racked bucks. So I decided it was time to do something different. I have a Summit Viper climber that I got when I was in 8th grade. I took that and headed to an oak grove that I hadn’t been in previously and thought, I’m just going to give this spot a try, and I climbed up a tree.

Huff’s gamble paid off, huge. When Huff first spotted the buck, it was about 70 yards off. “He was facing me, and the first thing I noticed was how wide he was. I was honestly in shock for a bit; it was so much bigger than any buck I’d ever seen or shot, he actually looked like a moose to me.” Traveling on same ridge as Huff, the huge buck slowed as it approached a small ravine between them. “I was trying to decide exactly where and when to take the shot,” says Huff. “Of course, I was super-nervous, and there was a lot of self-talk happening as I tried to calm myself down.” When the 12-pointer got to about 40 yards, Huff whistled softly to stop him, but the buck stopped behind two saplings. “When he took another step, I whistled again and he stopped again; he was still shielded a bit, but I could lean out some and get the sight on his shoulder. I held my 30-yard sight mark a touch high and shot.”

The buck ran 70 yards or so and stopped. “I saw his tail wiggle, and then he stumbled and finally tipped over,” says Huff. “When I climbed down and walked up to the buck, it still didn’t even seem real. I honestly thought I had a 170- or 180-inch deer, as I’d never seen anything close to that big before. His body was big too; he field dressed around 230 pounds, and it took me and four buddies to drag him out.”

Once Huff got the buck home, word of the giant buck spread quickly. “People just started showing up from all over,” Huff says. “At one point we had 40 people at the house, looking at him. Three of them were fellow hunters who offered to share pics and video they had of the buck. It was so great that they were willing to show me that and share in my success. Getting to know the other hunters has been truly incredible for me.”

The buck was definitely gawk-worthy, with 13-inch G2s, main beams over 27 inches each, and circumference measurements just under 7 inches. “We’re guessing he was 6½ years old, and we’ll be getting confirmation on that soon,” Huff says. “Honestly, it still doesn’t even seem real to me that this happened. To see a deer like that on property I’ve hunted for so long was just amazing. I know I’ll likely never top that experience—and that’s perfectly fine with me.”

What You Can Learn from Huff’s Incredible Buck

Yes, Dustin Huff experienced something of a whitetail-hunting lightning strike, but there’s an element of luck in almost every successful hunt, especially when it comes to world-class deer. And there are absolutely lessons to be gleaned from Huff’s hunt and his amazing buck.

First, Huff was willing to rethink his initial strategy and try something different, abandoning established stands and setting out with a climber. Too often, hunters (myself included) feel that if we just keep grinding it out in our good spots, success will find us. That can work, of course, but being overly faithful can also be the kiss of death. Multiple studies on hunting pressure have proved that whitetail deer—especially older, bigger ones—quickly learn to avoid hunters’ setups. It’s nothing for a buck to make a slight adjustment in his travel patterns in a way that keeps you from seeing him from your usual stands, even though he’s still around. So, changing things up can not only be refreshing, it can lead to success.

Second, switching to a mobile approach with a climber (or with a hang-and-hunt) pretty much guarantees that you’ll be hunting in a new spot, and as the old and time-tested saw goes: The first time in a spot is usually the best. There’s a reason why kids sitting on buckets seem to kill so many big deer; it’s because a bucket is easy to carry to a fresh spot where you can surprise a whopper.

Finally, the Huff Buck (and yeah, the truly world-class bucks are soon known by the name of the hunter who killed them) reminds us of an important aspect of whitetail rutting behavior: the excursion. Throughout the peak of the rut, bucks may travel miles out of their normal core area, and with an area hunter getting pics of the the Huff Buck 8 miles from where it died, it’s clear that this was either (a) a deer with a huge home range (entirely possible, but not common), or (b) a buck that couldn’t find a willing doe in his core area and decided to lace up his track shoes and go find one. It means that all this week and into the next, a monster buck you knew nothing about could suddenly appear in front of your stand—which is a good reason to get in the saddle and hunt as long as you can. The buck you see probably won’t be as impressive as Dustin Huff’s, but it could be plenty big enough to make your 2021 season.