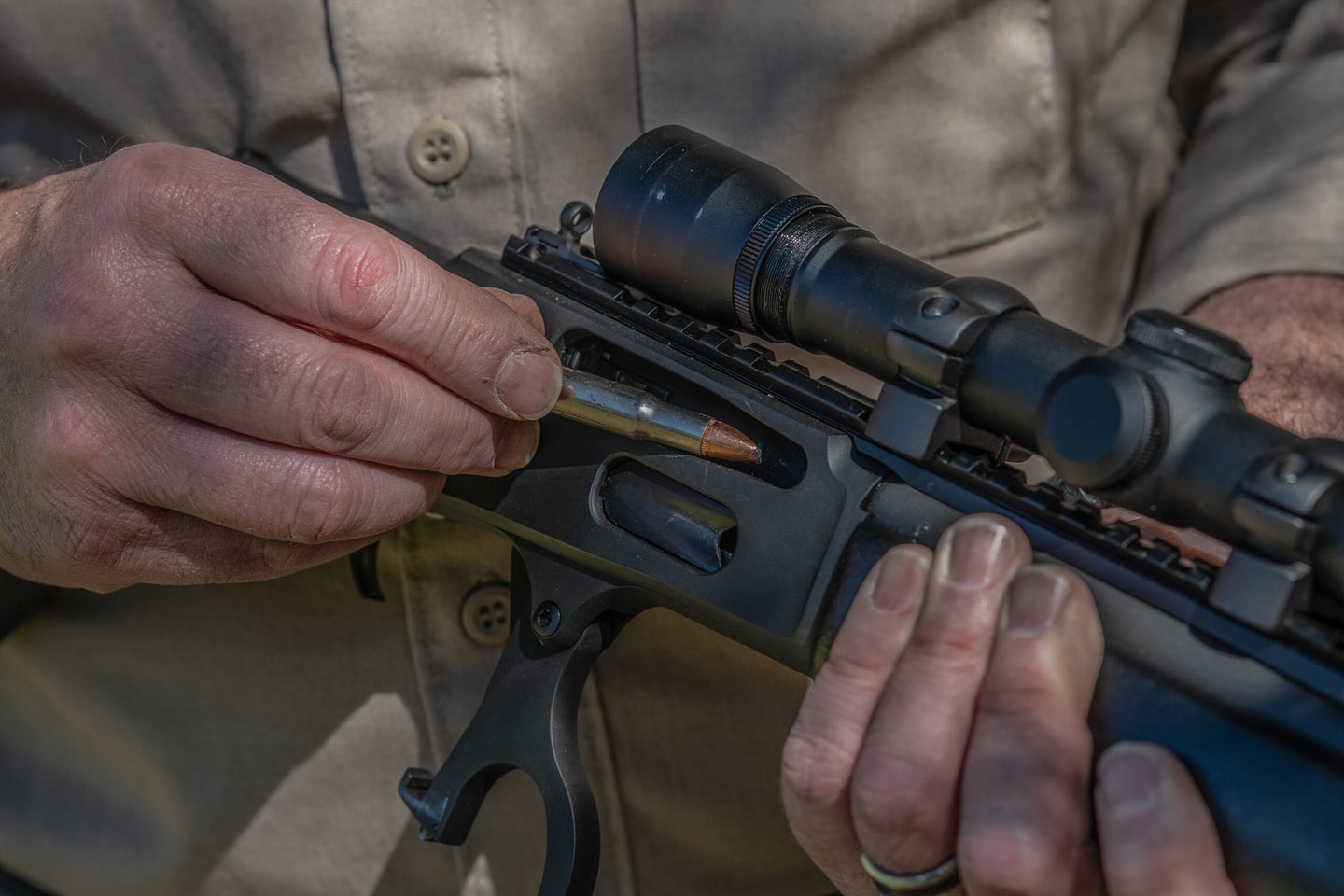 The .30/30 worked exceptionally well for hunters 100 years ago, and today's .30/30 rifles and ammo are even better. Richard Mann
SHARE

The average successful rifle shot at big-game critters no more than 100 yards (probably less). At that distance, your typical 150-grain .308 Winchester hunting bullet penetrates about 19 inches and deforms to a frontal diameter of around 0.55 inch. The same conventionally designed but heavier 180-grain bullet from a .30/06 will push to around 22 inches and expand a little wider, to about .6 of an inch.

But there’s a better .30-caliber option. There is a 150-grain hunting bullet that at 100 yards will penetrate at least 23 inches and expand as much or more than either with similar bullets. Not only that, but it will do so while producing just 13 foot-pounds of recoil energy when fired from a 7-pound rifle. That’s 6 and 11 foot-pounds less than the .308 and .30/06, respectively. So, what is miracle cartridge? It’s the .30/30 Winchester.

Killing Power Is More About Penetration Than Velocity

How could the ancient .30/30 possibly outperform two 30-caliber cartridges that are considered by many to be the best big-game cartridges of all time? The answer is simpler than you might think. With conventional bullets, the higher velocities of the .308 and .30/06 cause more bullet erosion, which reduces weight, and in turn, penetration.

You might argue that the higher impact velocities of the latter tend to create more tissue damage. That’s true, and if sufficient penetration is reached by all three of these, the ones fired from the .308 and .30/06 might in fact put an animal down faster. But not any deader, and none of that is quantifiable. What really counts is penetration, something former African professional hunter and gun writer Finn Aagaard recognized this years ago when he made two very astute observations:

1. “Given sufficient penetration, what does any additional bullet weight add to killing power? Nothing, absolutely nothing.”

2. “Proper bullet placement + sufficient penetration = quick clean kill. That, really, is all one needs to know about killing power.”

The simplest proof of this is that all the big-game animals of North America have been taken with a bow and arrow, with the latter traveling well under 300 fps in most cases. It isn’t speed that makes that arrow deadly; it’s penetration. You may think that arrows and broadheads kill differently than bullets. But they don’t. Aagaard explained this to us more than two decades ago as well. “Actually, arrows incapacitate by either taking out a vital part of the central nervous system or by causing sufficient bleeding to shut the brain down from lack of oxygen, which is exactly how rifle bullets kill also.”

In his 1970s book, The Hunting Rifle, Jack O’Connor talked about an old hand he’d encountered who’d hunted Wyoming, Montana, and the Yukon, and typically took 17 or 18 elk with a single box (20 rounds) of .30/30 ammo. He told O’Connor that a moose, lung shot with a .30/30, would run about 75 to 100 yards and die. Well before that, African professional hunter Wally Johnson took a .30/30 Winchester to Africa and used it to kill lions. The effectiveness of the .30/30 Winchester on big game should never be questioned; it has more than a century of proof sanctioning it.

Given the untold numbers of deer taken with Winchester Model 94s and Marlin 336s over the last century, it should come as a bit of a shock that some of today’s younger hunters will ask: Is the .30/30 good for deer hunting? Um, yes. For decades and decades, it was consider the deer cartridge.

So, why is it these days that the .30/30 is seen mainly as a “woods” rifle or a starter gun? Nothing about it has changed. In fact, modern ammunition loaded with solid copper bullets from Barnes and Hornady or with bonded bullets like the Fusion and HammerDown loads from Federal, the .30/30 is the best it’s ever been. It will anchor most anything a North American hunter needs anchored, out to about 175 yards or so.

And there’s the rub for modern hunters. The main reason the .30/30 has lost its big-game luster is because higher-velocity cartridges extend range, and with extended range comes extended opportunity. The second reason is that it’s easier to learn how to shoot than to hunt. Across the board, hunter skill is far less than it was a hundred years ago—and 50 years ago and 25 years ago.

Like with any other big game cartridge, bullet selection also matters with the .30/30. Simplified, there are three bullet types to choose from. There are the traditional jacketed lead-core bullets, bonded bullets, and mono-metal (all-copper or gilding metal) bullets. One of the keys to the 30-30’s effectiveness on big game is matching the bullet to the game you’re after. If that’s done correctly, and if you make a good shot, you’ll have antlers for the wall and meat for the freezer.

Remington’s conventional 150-grain Core-Lokt load for the .30/30 will penetrate almost two feet while developing a frontal diameter of more than a half-inch.

These bullets are typified by the Winchester Power Point and Remington Core-Lokt. They will generally deform with a wide front and penetrate plenty deep. The Hornady LEVERevolution FTX Load is a conventional jacketed lead-core bullet but one with a pointy but soft flex tip. This tip increases the ballistic coefficient from around 0.221, for a round nose bullet, to 0.241. This flattens trajectory and increases impact velocity and energy. However, from a terminal performance standpoint, the results will all be similar, and all of these loads should work splendidly on deer. The traditional-bullet anomaly is the 190-grain load from Buffalo Bore. It uses a jacketed lead core Hawk bullet and may be the deepest penetrating .30/30 load available in any bullet style. If you’re looking for a grizzly defense .30/30 load, this is it.

With two feet of penetration and bullet expansion exceeding .6 inch, Federal’s HammerDown load for the .30/30 Winchester is a coast-to-coast North American big-game load.

With a bonded bullet, the core is bonded to the jacket to help prevent core and jacket separation and to help the bullet retain weight for good penetration. The Federal Fusion and HammerDown .30/30 loads feature bonded bullets. There’s not a lot of difference between bonded bullet and conventional bullet wound cavities out of a .30/30. However, if heavy bone is hit early in penetration, the bonded bullets will hold together better. Though not bonded, the Nosler Partition with its protected rear core, delivers terminal performance similar to bonded bullets at .30/30 Winchester velocities. Also excellent for deer, these are the bullets you’ll want if you’re taking your .30/30 elk hunting. If you’re hunting bear over bait, they will also hold up well at close range.

There are quite a few lead-free mono-metal options for the .30/30. Most all of these bullets, including the Barnes TSX FN, Hornady MonoFlex, Federal Trophy Copper Tipped, and Nosler E-Tip will provide similar wide bullet upset and they’ll retain all their weight, offering very deep penetration. There is an exception. With the Controlled Chaos load from Underwood Ammo, the front of the bullet turns to shrapnel and the base drives very deep, delivering a mix of traditional and mono-metal bullet terminal performance.  This is a true mono-metal bullet, but it reacts to impact very differently than conventional mono-metal bullets, creating a nasty wound cavity.

If you made me choose one all-around load from the options above, I’d go with Federal HammerDown. Not only will it handle anything the .30/30 is suited for, the nickel plated cases with their chamfered rim are optimized for easy and reliable feeding in lever guns.

The .30-30’s effective range of about 175 yards or a little more is just fine by me. I like shooting more than most. But reading sign, finding game, getting close, and then shooting is even more fun. As David E. Petzal says: It’s called hunting. You might like it.

Plus, shooting at long distances is a poor stand-in for hunting skill–one that often doesn’t work out well for the shooter or the shot-at. Well, what about hunting the West, some will say? You wouldn’t take a .30/30 on a pronghorn hunt, right? Well, why not? People shoot pronghorns with bows. I’ve hunted the West plenty, and as long as I do my part as a hunter, I would never feel under-gunned there with a .30/30. In fact, a lever-gun goat hunt sounds like a blast to me.

Spend enough time hunting game all over the world with a wide range of guns and cartridges and, though it takes a while, you learn things. Like, there are no magic rifles, cartridges, or bullets. You don’t go shooting at things you’re not sure you can hit. There’s no good that comes from a hard-kicking rifle. And if you can hunt, all you need is a .30/30.

Read Next: The 8 Best Lever-Action Rifles of All Time