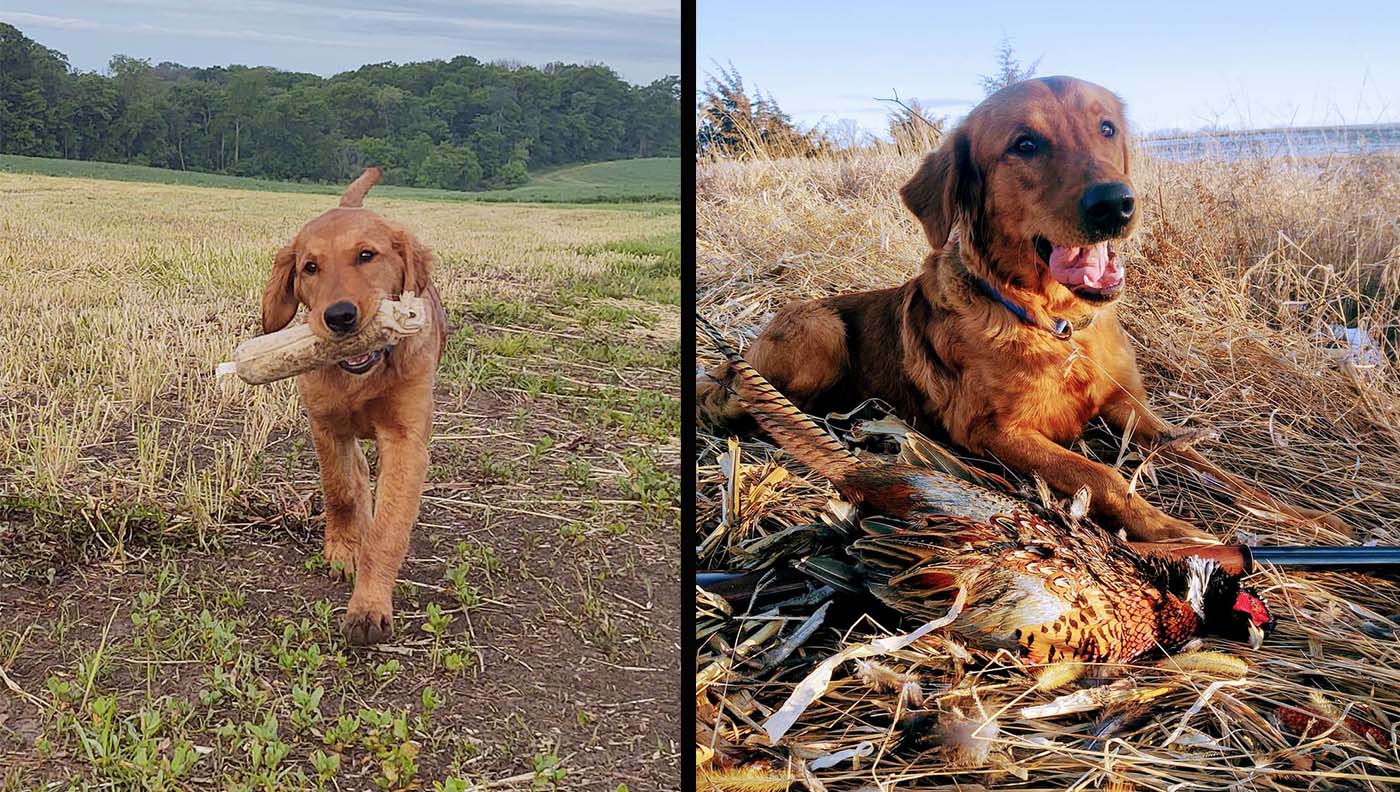 The author's pup, Cooper, graduated from the training grounds to the field with, well, flying colors. Scott Bestul
SHARE

There’s nothing like a retriever pup’s first hunting season, which can be a joyous adventure—or an unmitigated disaster. While the dog’s natural instinct and desire obviously play a part, the biggest share of the burden is up to you. How you prepare your Lab, golden, or Chessie pup—as well as your behavior in the field—can make or break that rookie season.

For advice, I turned to Darren Thompson, owner of Reaction Retrievers outside Winona, Minnesota. Thompson has worked with retrievers, from basic to advanced training, for more than 30 years. His dogs have won at every stake level in field trials and hunt tests. He offered the six basic preseason rules and drills below to help insure your retriever’s rookie season is a thing of beauty.

1. Start With the Right Attitude

A positive attitude that makes training fun and emphasizes the positive is the biggest tool in your bag. “Too many people adopt this authoritarian attitude, determined to make the dog obey immediately,” Thompson says. “Most dogs, but especially retrievers, want to please you, so set up your training to make that happen. Keep sessions short, fun, and frequent, and make a big fuss over a young dog when he does well. If he makes a mistake, don’t come down hard on him until you’re sure he knows the command and is choosing to break it or ignore you.”

Short, daily sessions are the best way to get lessons to stick, Thompson says. “You’re way better off doing two or three sessions of training that last only 5 or 10 minutes every day than teaching for an hour once a week. Dogs love a routine and repetition works wonders. That said, be sure not to bore your dog. When it’s clear they understand, advance the drill.”

2. Teach Pup to Be Steady on Sit

Stellar behavior in the field starts with basic obedience, according to Thompson. “Sit means sit until the dog hears another command that releases it,” he says. “You should be able to toss a bumper in front of the pup and he won’t grab it until you tell him to. Throw another bumper out a ways, and keep telling him to sit. Walk around him, and he should keep sitting. This is a drill you can work on in your backyard, just a few minutes, every night. If the pup breaks, you’re advancing too quickly.

Teaching thoroughly means consistent repetition. “A dog has not learned the command just because he did it correctly a few times,” Thompson says. “Make it a few hundred times, then he knows it. As a rule of thumb, If he has successfully followed the command for three training sessions in a row, I feel he’s getting it.”

3. Make Sure Pup Always Comes When You Ask

Next to having your dog sit on command, bringing him to your side when you say “here” or “come” is a critical skill, Thompson says. “It’s a basic thing that’s easy to ignore, but when you need it the most, you’ll regret not being able to have your dog come to you, every time you call it. This is not just a matter of obedience in a hunting situation; it’s also a safety matter. If you’re walking your dog off-lead and a car is coming, you want your dog to come to your side when you tell it to.”

Again, most retriever pups will want to come running when called. But reinforcing the command, especially as your puppy morphs into an adult, can be achieved with a check cord. “When you say ‘come’ or ‘here’ and the dog hesitates, or decides to ignore you, simply enforce the command by reeling the dog into you with the check cord. Then praise the pup when it gets to your side. Scolding the dog if it hesitates or refuses, but eventually comes to you, even if it takes a check cord, is sending the wrong message.”

Retrieving is hard-wired into the DNA of most retrievers, and it’s your job to bring it out—by making it fun, of course. “Fetch can be as simple as the pup grabbing a bumper out of your hand when you say the command,” Thompson said. “Or just a short toss out in the yard as a reward for obeying the ‘sit’ command. The most important thing is to make ‘fetch’ something that the dog associates with a fun, positive experience. Most retrievers want to do it anyway, so you’re basically rewarding it for performing an act they like by nature.”

As you prep for the season, make retrieves short and easy and obvious, Thompson stresses. “Use white bumpers and toss them short distances on a mowed lawn. Once the pup is nailing these easy marks and running them back to you, gradually increase the length of the retrieve and the depth of the cover. If your pup is struggling with the next step up in difficulty, go back to short and easy and praise the heck out of him when he succeeds. Do your best to learn to read what your dog gets and what he’s struggling with. Every dog is an individual and learns at a different pace.”

If you’re a duck hunter, place some decoys on the lawn and have the pup make his retrieves by running through the dekes. “When your dog is making water retrieves, you can add decoys in some of the training sessions, so he’s used to swimming through them as he goes to retrieve a bird,” Thompson says. “You don’t want the decoys to be a new distraction on the dog’s first hunts.”

Every polished gun dog associates gunfire with a potential retrieve. But that’s not instinctive, according to Thompson. “No dog is born thinking a gunshot means a bird to retrieve,” he says. “You have to teach them this and not expect that, just because he has a strong pedigree, he’s going to know it.“

Perhaps the best way to achieve this is to have your pup watch an experienced dog making retrieves that are preceded by a gunshot from a starter’s pistol or other light gun. “One of the most overlooked aspects of dog training is how much a young dog can learn watching an experienced dog work,” says Thompson. “Back off the action so the pup isn’t startled by the gunshot, but let him see the whole process of the shot, the bumper falling, and the retrieve. Run through a few of those with the experienced dog, and the pup will be itching for his turn.”

Don’t have an experienced dog handy? No problem. “In that case, have a buddy walk off 30 or 40 yards while you give the pup the sit command and stay with him. The buddy tosses a bumper, fires a starter pistol, and the pup watches the bumper fall before you send him for the retrieve. Do that a few times, keeping the distance, and the pup starts putting the whole process together. Suddenly something he already loves, retrieving, is now linked to the sound of the gun. Before long whenever he hears a gun, he’s looking for a bumper or a bird to retrieve.”

If you hunt waterfowl from a boat, opening day is not the time for the pup’s maiden voyage. “Get him out and take him for boat rides now, when it’s warm and you can pay attention to him and make him feel safe and happy on the ride,” Thompson says. “Remember, this is his first experience and, again, you want him to like it. Of course you’ll want him to behave well and mind you, but just getting him used to the ride and liking it is Step One.”

One way to make the boat ride enjoyable is to assign the pup a place in the boat that is his and his alone. “Put down a cushion or something for him to sit and lie on, and that’s his spot,” Thompson says. “When you hunt in the fall, it will keep him off the cold boat bottom and be a safe place for him. It should also be a place where he can see well. Since most pups won’t be ‘handling’ (taking hand signals to direct them to a blind retrieve) that first season, you want him to be able to see ducks fall when you shoot them. That’s something to keep in mind if you have a boat blind; make sure he’s got a spot to see out of the blind and keep track of incoming birds and ducks that you shoot. You should also have a ramp or a method of getting your dog in and out of the boat without it being a traumatic experience.”

Do all six of these things now, and pup will be ready for his first fall in the field.