Don’t Laugh, It Works: Dupe an Early Season Pronghorn with a Decoy

Most hunters save pronghorn decoys for the rut, but they can really work now, too, if you know how to use them 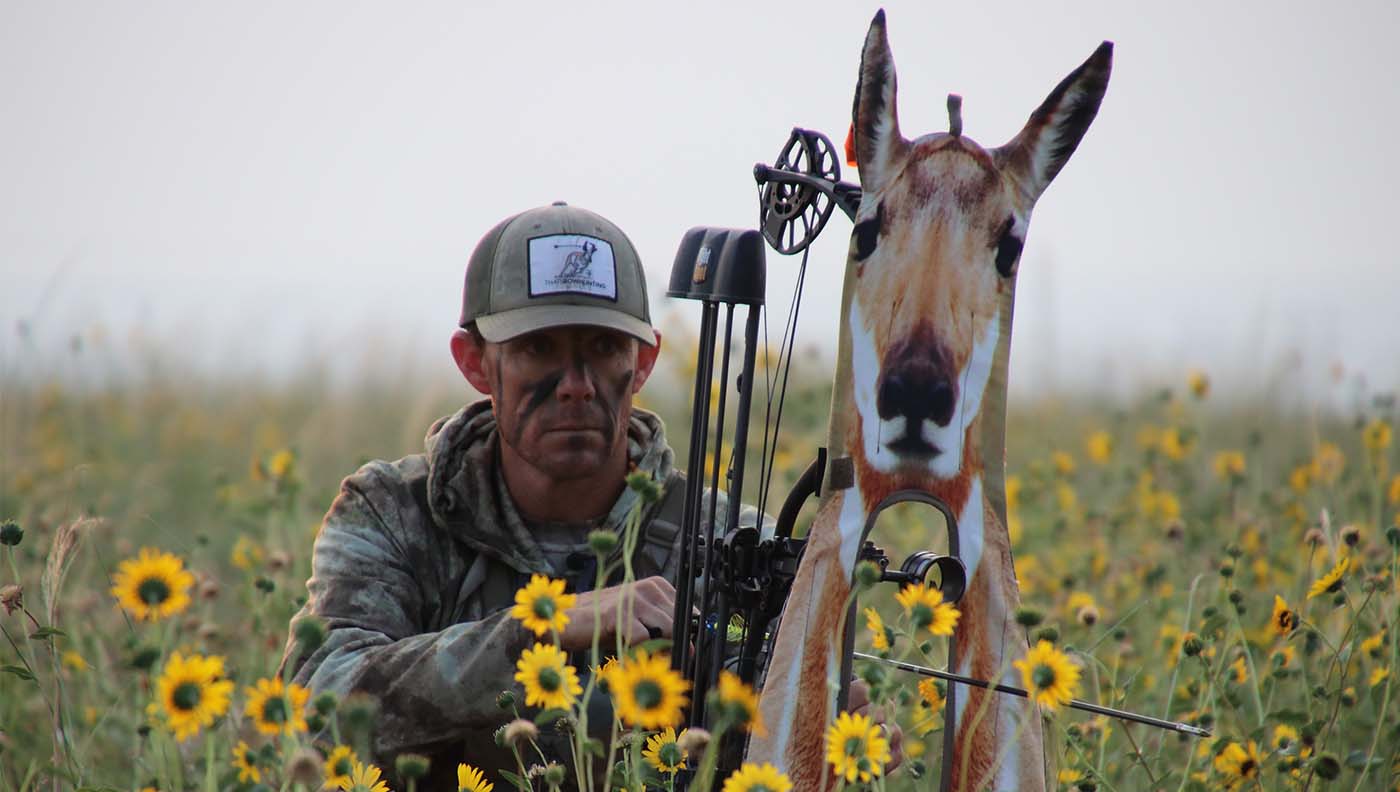 The author gets ready to draw as he peers through a bow-mounted pronghorn decoy. Jace Bauserman
SHARE

I rolled my eyes and chuckled to myself. I’d been hunting pronghorn with archery tackle for two decades, and this wasn’t going to work. It was August 17, the peak rut was still a full calendar flip away, and the pre-rut was running at a trickle. My buddy Danny Farris and I were posted up in a sandy sage flat. We had a 3-D pronghorn buck decoy set up 30 yards from us, and attached to my riser was a bow-mounted pronghorn doe decoy. Danny had a white towel draped over his butt, and was crawling around in the sage.

If that sounds like amateur hour to you, trust me, it did to me, too. I figured there was no way it would work when Danny suggested it. But it did, and it worked well.

Early Season Decoying Is Different From the Rut

During my 20-plus years of slinking across the plains for pronghorn, I’ve tried using a decoy on a number early-season bucks. The result has always been a white butt sprinting away from my position. Why? Because it’s a tactic that usually only works during the rut. There are only a few weeks during bow season when a mature buck will slide like a cutting horse in front of an imposter decoy and give the bowhunter a chance for a shot. During the rut, bowhunters are playing on aggression—tempting a testosterone-charged buck to engage in a battle. In the early season, testosterone levels are low. So, if you play on their aggression now, you’re apt to see white butts too.

What my hunt with Danny taught me is that in the early season, you need to play on a pronghorn buck’s curiosity and territorial nature instead. And if you do that, a decoy setup can work great.

When and Where to Dupe Early Season Pronghorn with a Decoy

Have you ever watched a pronghorn walk a fence line? They will walk a mile or more to get to their favorite crossing. They are creatures of habit, and I’ve never bowhunted a more inquisitive creature. During the first part of bow season, you’ll find bachelor groups, bucks with does, and lone bucks. The goal is to identify a current r core area. Pronghorn are territorial, and unless pressured, they can typically be found in the same general area day after day. If you watch them for hours through the lens of a quality spotting scope, you see that they wander through, bed down, and graze in the same areas each day. Your job is to keep watching until you nail down these spots, even if this means sacrificing a few days of your hunt.

Drop pins of these core areas on a digital mapping app, and when goats walk away from them, go in and investigate. Typically, one locale will be the hot spot. You’ll know it. There will be multiple beds, lots of tracks, droppings, and the stench of urine will be in the air. Buck scrapes will also be prevalent. As you’re looking the area over, find a spot with decent cover. On the plains, this may mean a lone yucca, sage, or patch of sunflowers. Mark this spot on your mapping app, too. This is where you’ll set up with your bow-mounted decoy.

Next, find a good spot to stake a 3-D or silhouette buck decoy that’s 25 or 30 yards from that location. Ensure the imposter buck is visible to passer-by pronghorn, and mark the exact spot where you plan to put him. The reason for all the digital map marking is that you’ll be going in and getting ready well before the sun crawls up. You don’t want to get caught still setting up as first light starts to fill the sky.

How to Set Up and Make the Shot

As the sun begins to rise, stay low and start glassing. Don’t be afraid to move a little. With the bow-mounted decoy, you are part of the setup, and movement is natural. When you spot pronghorn, don’t expect an immediate reaction. You’re not playing on aggression. You’re playing on curiosity and their territorial nature. Don’t go at them. Stay put. They will see you from a distance, and once they know you’re there, you’re pot committed. It may take hours—just like waiting at a waterhole—but eventually they’ll start to meander in your direction. They can’t help it. You’ve invaded their core area, and their curiosity will ultimately take over.

Keep in mind that while you’re waiting, the animals may bed multiple times on their approach or skirt your position at 100 yards and move off. Don’t freak out. Just stay put. That said, I do like to move my bow-mounted decoy often if they seem to hang up. Sometimes, all it takes is a flick of the ear to bring your target animal into range. I also recommend having a white towel in your pack. It sounds outlandish, but don’t be afraid to prop your bow up against a cactus or sage, drape the towel over your butt and crawl around a little. This method has been money for me and has brought hung-up bucks the last few yards I needed for a shot.

You don’t need a lot of gear to pull this hunt off, but you do need some. Full-body pronghorn decoys are few and far between. Most have been discontinued, but I’ve found several on Facebook and eBay. Silhouette decoys are a dime a dozen and work very well. My go-to is Flambeau’s MAD CommAndelope. It folds up and is easy to tote via the carry handle, and it straps to most any pack. It boasts a sturdy build, and the heavy-duty stake drives deep in the ground and keeps the decoy upright in high wind, which is standard on the plains. I have used Montana’s Antelope Buck and Antelope Buck & Doe Combo, which work terrific. They are realistic and fold up to nothing in a pack. My only issue is the wind can wreak havoc on them.

For the bow-mounted fake, go with Ultimate Predator Gear’s Stalker Pronghorn Doe or Pronghorn Buck. The company also makes a combo pack that gives you both decoys. When running this decoy, I prefer the Spider Wraps over the standard straps that come with the decoy. The Spider Straps can be left on the decoy, making quick and easy to attach. Another great bow-mounted option is the Antelope Buck Decoy from Heads Up Decoy.

The last main piece of gear is something that will stand your bow up and hold it with the bow-mounted decoy attached. You won’t be able to sit and hold your bow for hours and hours. There are a few stabilizer mounts on the market, and bow stands like those from Pine Ridge can work. However, I use an arrow with a field point in combination with a bow stand set on my lower limbs. The nock of the arrow goes right under my bottom d-loop knot, and when used in tandem with the bow stand, I get a very sturdy platform.

On that day out on the prairie with my buddy Danny, a good pronghorn buck finally approached us cautiously. It took 48 minutes for the animal to close the distance from 110 yards to 53. I could tell by his mannerisms that he knew something wasn’t right. He would stomp his foot and make that annoying kazoo sound pronghorn make. Then he started to circle downwind. When he stopped to give the decoy another look, I let the arrow fly. The only problem was up to that point I’d only decoyed rut-crazed bucks, which will stand still and take an arrow. I should have held on the bottom of the heart, anticipating the spooky buck would react and duck the arrow. I didn’t, and the shot slid just over his back. Lesson learned.

In fact, two lessons: First, aim lower next time. And second, despite my skepticism, decoying early-season pronghorn really does work.