Want fewer blown stalks and botched shots at pronghorn bucks? Follow these five keys to success during the rifle season 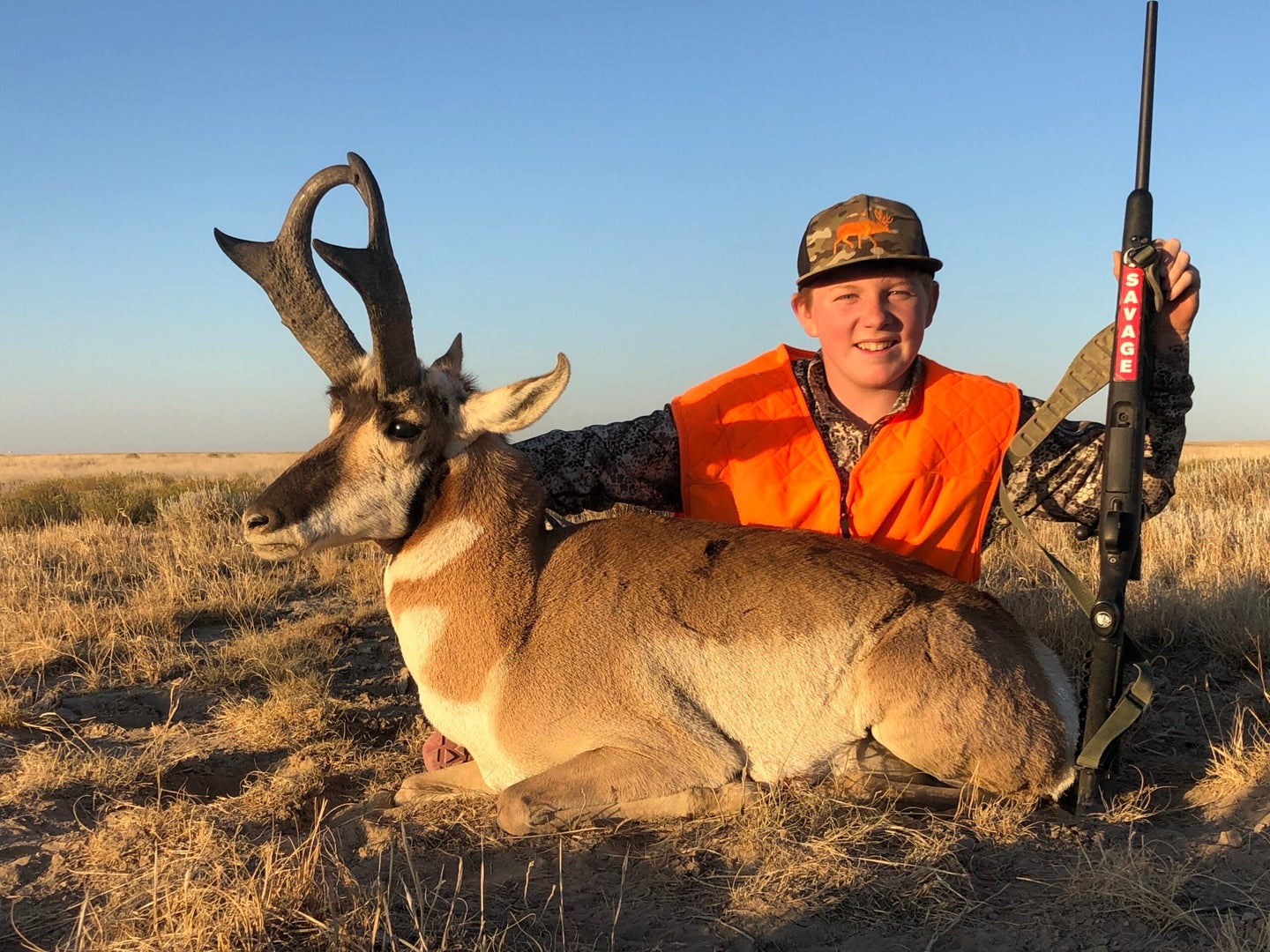 A few years back, during the first half October, my son hammered an 85-inch Booner pronghorn. I don’t tell you this to brag—well, maybe a little—but mainly because I just wrapped up a rifle hunt with a buddy this October, and it occurs to me that both hunts were full of similarities that lead to success.

Hunting pronghorn with a rifle seems easy. You glass some goats from a distance, sneak quickly into range, and take the shot, right? Well, that can work, but over many years of chasing speed goats, I’ve come to realized that this approach leads to more blown stalks and bad shots than anything else. To really up your odds of taking a nice buck with a rifle, you’re better off slowing down, considering all your options, and then choosing the best strategy for the situation at hand.

Here are my five keys for taking a great goat with a rifle during October.

1. Don’t be in a rush. Patience leads to better pronghorn opportunities.

Too often when chasing pronghorn with a rifle, we get too aggressive. We make bad decisions and blow stalks, trying to put a buck in the truck without having to exert too much effort. Maybe more than anything, we take bad shots and miss—or worse. Why?

Pronghorn are visible creatures, and when we see them, we believe we can kill them no matter what. And for some inexplicable reason, some hunters think they can shoot farther than they normally would just because the target is a pronghorn.

For all of these reason, you need to remind yourself to slow down and be patient on a rifle pronghorn hunt. On both of the hunts I mentioned earlier, we did just that. We used our optics to locate our target animals. Both bucks were with large herds of does and were wandering through pancake-flat ground when we found them. In years past, I probably would have pushed the situation—tried to force something to happen. But these hunts were different. We watched both herds for over three hours and waited for them to put themselves in a bad position. You can’t beat the eyes of a pronghorn, and when there are lots of eyes, you’re setting yourself up for failure if you try and do so. Stay patient and let the goats work into an area where you can use the topography to close the distance. This way, you can close ground and set up for a shot at a buck that has no clue you’re in the area.

The pronghorn rut will be winding down by mid-October, but most bucks are still working hard to keep their harems in check.

My son’s buck had over 30 does with him, and though the herd finally worked into some landscape that wasn’t bald and flat, one or more does always seemed to be in a position that would halt our approach.

Twice, from a distance of 800 yards, we watched the bruiser buck run off satellite bucks, and he was constantly bumping does in the rear with his nose and moving them around. For this reason, we opted to stay put and let the power of the rut work in our favor. For over two hours, the buck and his does covered miles of prairie. He would run them one way and then another. Knowing we had put ourselves into a good position, we sat tight and waited for our turn.

It was inevitable that a doe would eventually come in our direction when the old buck got frisky, and one finally did. At 263 yards, after the buck angled at the doe like well-trained cutting horse, my son, from a prone position on a backpack, made a perfect high shoulder shot, and the buck was dead before it hit the ground.

When the rut still shows signs of life, and you get around speed goats, let the aggression of the buck work in your favor. Stay put and chances are good that a doe or two will eventually get pushed in your direction.

3. Get ahead of a pronghorn herd for an easy shot.

This season’s hunt for my buddy Grafton Singer was a little different in terms of the rut. His buck had a passel of does, but time spent behind a set of 15X binos attached to a tripod showed that he wasn’t running them all over the place, but instead just tailing behind the girls. The does had a destination in mind, and after watching their course of travel for a long time and then taking a close look at the landscape, we moved ahead of them and waited.

Pronghorn don’t tend to wander too far off an established course once they set the cruise control. Unless something buggers them, they hold their path. This is a perfect scenario for the rifle hunter. Keep the wind right, use the terrain, and get well ahead of the traveling herd. Once you’re set up, don’t pop your head up and down above the landscape constantly to see what’s going on. Trust the herd will work your way, because they usually will.

4. Water is still a win for rifle-season pronghorns.

Pronghorn have to drink, and although October isn’t August in terms of torrid temps out West, hunting water still works.

Spend time behind the glass watching where goats are watering, and drive access roads to investigate springs, ponds, and stock tanks. If you can locate an area with limited water sources, and you find tracks, droppings, and urine-stained ground around a water source, your tag is as good as notched.

Set up a ground blind 100 yards off the water and wait the goats out. Of course, you can hide in the prairie grass, a patch of sage, or lean up against a lone cedar, but this limits your ability to relax and move, and lets the fickle prairie breeze spread your stink. So if you have a pop-up ground blind, use it.

Pronghorn get wise to roads—including small county roads and even two-tracks—and will disappear once they see multiple rifle hunters creeping along and stopping to glass. So don’t panic if you show up to your rifle-hunting area and pronghorn sightings are few and far between while driving access roads. Look at your digital mapping system and find a roadless location that supports suitable pronghorn habitat. Next, load up your pack, grab your rifle, and cover some country on foot. My hunting companions and I have killed a pile of goats by picking a location and just going on a walkabout. This method puts you out in pronghorn country, and if you’re covering roadless country on foot, you’ll have a great chance to punch your tag.