Think you need a private field full of sunflowers to have a good dove shoot? Think again 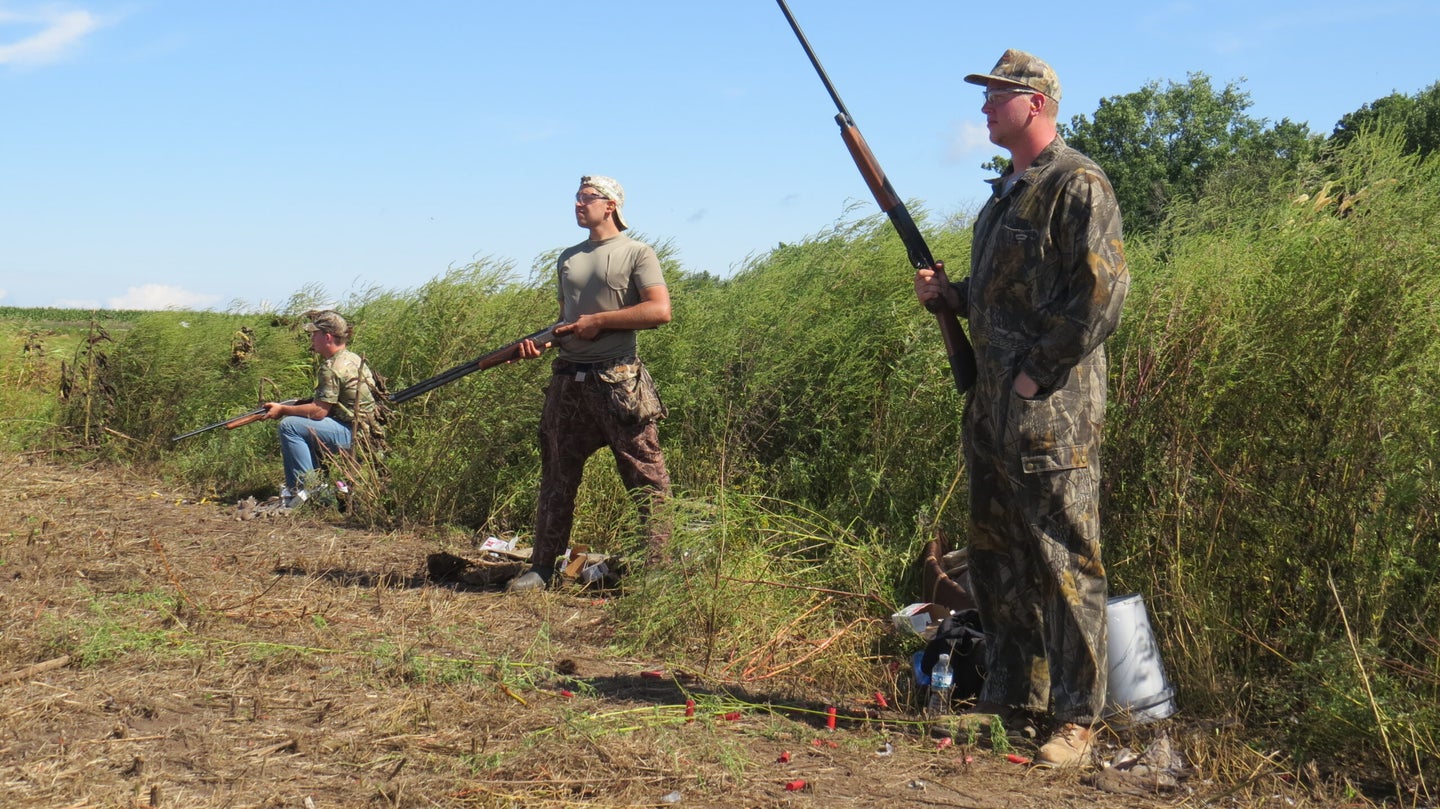 Sometimes it's better to find a field that's next to a public dove field shoot birds passing by. Phil Bourjaily
SHARE

For an hour and a half, I’d waved people away with a flashlight from the spot I’d claimed at 4:30 in black darkness. Based on the number of doves I’d seen the other day, I had the best part of the field. At shooting time, I had it to myself. Five minutes later, I was sharing it with a dozen or so other hunters that materialized out of the bushes. I can play well with others, but prefer not to. I shot a couple of doves and left. When I came back that afternoon, the field was empty and I filled the rest of my limit uninterrupted.

You can be sure of two things in a public dove field: doves and dove hunters. The more doves a field has, the more hunters it attracts.  You can join the crowds or fight them, or do as I do and try to avoid them, but one way or another, your public dove hunting plan has to take other hunters into account. Here are ten tips.

Most states plant sunflower fields to attract doves to public areas. Doves love all kinds of seeds, but they love sunflowers above almost all else. Doves also need water, and roost trees, plus something to perch on before they feed. They prefer to feed on bare ground where they can see danger coming. A good sunflower field meets all these requirements. Yet, for some reason, doves will prefer one to another. The presence of sunflowers doesn’t guarantee shooting.

Do your scouting to see where the birds are. Watch where birds enter and leave the field, and see where they want to feed. Often they’ll perch on wires or dead trees first, then drop down into the field.

Doves will get a drink after feeding and especially in the last hour of daylight before they go to roost. If you can find the water hole doves are using, you can have a good shoot away from the crowds. As always, doves like bare ground and dead trees to perch in. A pond with mud or sand around the edges makes the best water hole. Shots around waterholes are usually close so it can be a good place for your open-choked small-gauge gun.

3. Look for the Dove Field Next Door

One way to beat the crowds is to hunt next to the hot field. Find the flight line and get under it, and pass-shoot the birds before they reach the sunflowers. This tactic works much better if the field next door is cut. A harvested wheatfield is perfect and I’ve shot doves in mowed alfalfa fields next to feed. Retrieves are easy and a spinning wing decoy might pull a few traveling doves close. A couple of friends found a cut wheatfield field next to a sunflower field a few opening days ago and had a great shoot off by themselves.

The big WMA closest to me sits between two major—by Iowa standards—population centers. It attracts lots of birds and lots of hunters. It typically has half a dozen sunflower fields, and they all get pounded. It’s twice the drive to get to the small county WMA I’ve hunted on several opening days, but well worth the extra time. I have had some very good, uncrowded hunts there, even though (or perhaps because) there’s only one small sunflower field on the property.

Read Next: 9 Hunting Tips for the Dove Season Opener

About a dozen years ago when we had our first dove season in Iowa, the DNR planted four sunflower fields. Three thrived and produced bumper crops of sunflowers, one failed completely. It was all weeds, but the DNR techs mowed it anyway, as if the sunflowers had come up.

Doves like weed seeds, too, and while the field didn’t have the numbers of birds the others did, I didn’t have to share. As a bonus, I shot two banded birds that day.

6. Protect Yourself from Other Dove Hunters

I have hunted in a public field where someone took a couple of pellets to the face, and not the kind that rain down gently on your head either. These drew blood. Protect your eyes and ears if you’re braving the crowds. Shotproof glasses will stop a pellet at ten yards. I know, I’ve shot them to find out. They’ll help you see birds better, too, so long as you choose a fairly light bronze or rose tint.

A friend of mine found a small sunflower field on a public area that held lots of doves. He rounded up about ten friends and told everyone to get up early and drive to the field separately. They were there first, and any latecomers saw all the parked vehicles by the field and kept going. It was kind of a jerk move, but they had a great hunt.

I have learned my lesson, and that lesson is, the early bird gets run over. Now I’ll sleep in on opening morning, and hit the field at the crack of 10:30 after almost everyone has limited and gone home. The shooting isn’t fast in the middle of the day, but I can move around until I’m in the best spot, and peck away. It takes a while, but most years I’m leaving with a limit just as the afternoon shift is arriving. It’s a low-key but very pleasant way to start hunting season.

If you don’t have the patience to sit through the middle of the day, you can walk up some doves. You won’t get close enough to shoot at doves in an open field, but if you keep your gun ready and walk through the standing sunflowers, you’ll get flushes every bit as sporty as you would from any upland gamebird. Listen for the high-pitched trill of wing feathers, and be ready for twisting takeoff. It’s possible, too, to walk under trees where they’re resting during the mid-day and get some very challenging chances at birds flushing off the branches.

Read Next: Here’s Why a 12-Gauge Is the Best Shotgun for Dove Hunting

It’s easy to assume fields are shot out after opening day. In my experience with public dove fields, there are usually two to two and a half days of shooting to be found before all the birds leave. Sometimes you can come back to the same field later on. Doves are migratory birds, after all, and new ones arrive from the north periodically. Sunflower fields will still attract doves, at least until the fields green up and ground cover grows high enough that doves no longer feel safe landing to feed. There was a very dry fall several years ago where we enjoyed good hunting into October on a public sunflower field that everyone else had given up on weeks before.