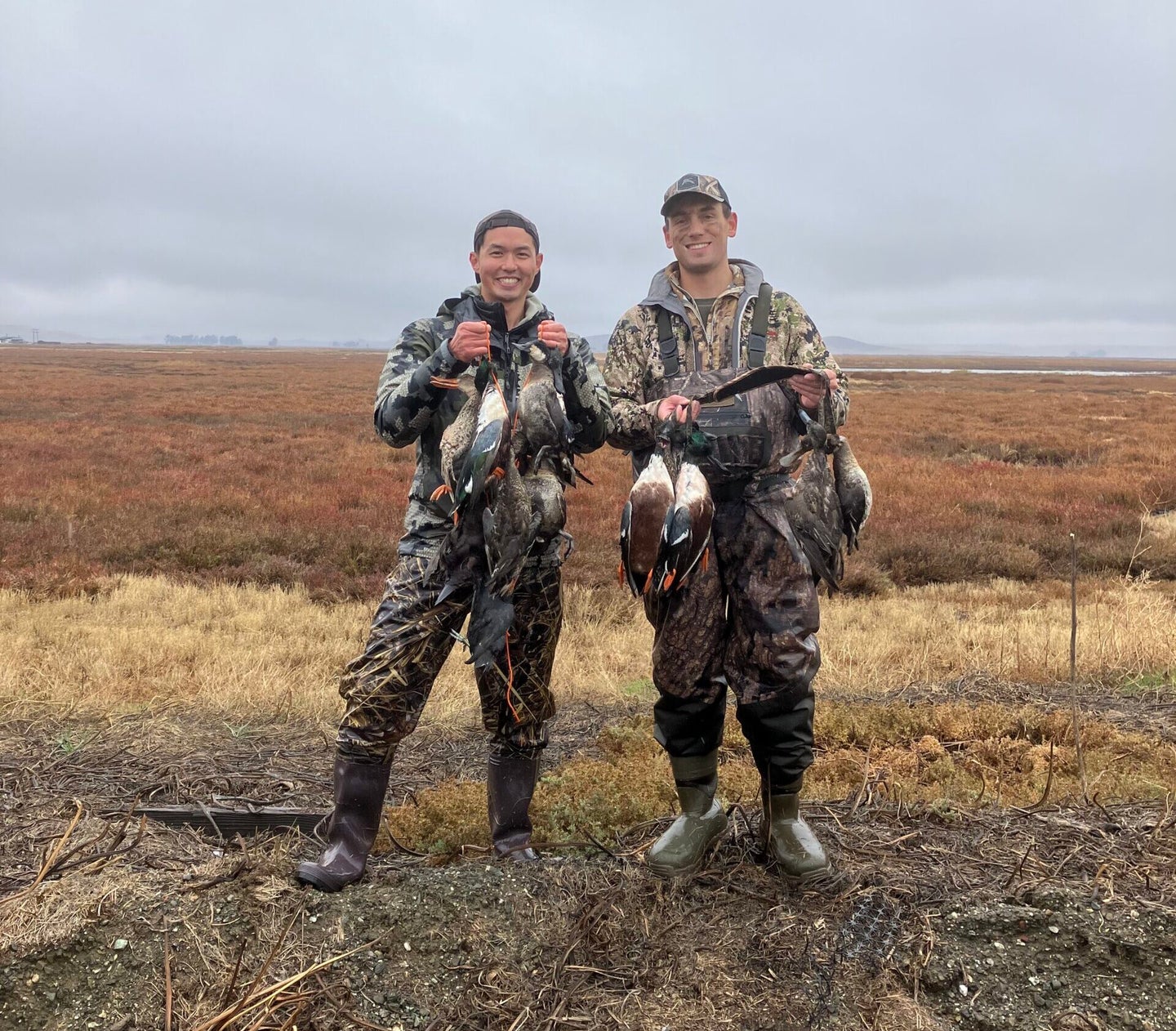 The author (right) and his buddy show off their limits from a stellar duck hunt. Sage Marshall
SHARE

I woke up before my 2:45 a.m. alarm more nervous than usual. In my second season hunting, I was taking my buddy Kevin on his first duck hunt on a heavily pressured public refuge I’d never been to. Amanda, my mentor, had gotten sick and bailed last minute. We were on our own.

We arrived at Grizzly Island Wildlife Area two hours before shoot time. But after we parked, I could already see dozens of hunters’ headlamps blinking at us from throughout the marsh. I hoisted my pack full of duck decoys, and we hit a levee trail at a brisk pace. Amanda had dropped me three pins of possible spots, but they were all taken. Kevin and I continued down the dark trail. Twice, we ventured off into the marsh, bumped into other hunters, and had to return to the trail.

“How much longer?” Kevin asked.

Deep in the refuge, we found a small pond with some cover. The sky was already beginning to purple. We stashed our gear in a patch of alkali bulrush and rushed to put the decoys out. But by the time I turned on my brand-new spinner, the morning flight was well underway. The Suisun Marsh reverberated with gunshots.

The cover was so sparse I ditched my marsh seat and sat directly in the water. Kevin, who sat on an upturned bucket, soon fired at a bird passing fast overhead and away—and to my surprise, dropped it. I sprinted after the cripple and finished it. Then I handed it to Kevin and shook his hand. His first duck was a drake shoveler, in nearly full plumage. I was relieved and proud. Everything after that was a bonus.

And there were plenty of bonuses.

Birds appeared out of the fog and worked right into our spread. Kevin continued his hot start and dropped three more ducks in quick succession. I couldn’t hit anything at first—until something finally clicked. Then I couldn’t miss. By mid-morning, I had five ducks in hand—two shy of a seven-bird limit.

Kevin’s shooting eventually went gone cold, and I had to start loaning him shells. (California refuge regulations only allow each hunter one box in the field.) By the time I was down to my last two shells, we each had six ducks and were too cold and wet to consider going back to the car to retrieve more ammo. Still, I was intent on getting my first-ever public land limit. So when a drake spoonie cupped his wings and soared toward us, I took my time—and dropped him.

I gave the last shell to Kevin, and we waited until a group of ruddy ducks blazed around the pond. Kevin and I had both whiffed on some ruddies earlier in the morning, but he drilled one passing 20 yards from our hide. Two limits. We bumped fists.

“That was probably the best day of hunting of any kind I’ve ever had,” Kevin said.

That night when I first closed my eyes, I saw the outlines of ducks, wings cupped, gliding toward us. My alarm was set for 2:45 a.m.