How to Turn a Sweet Pup into a Bird-Dogging Machine 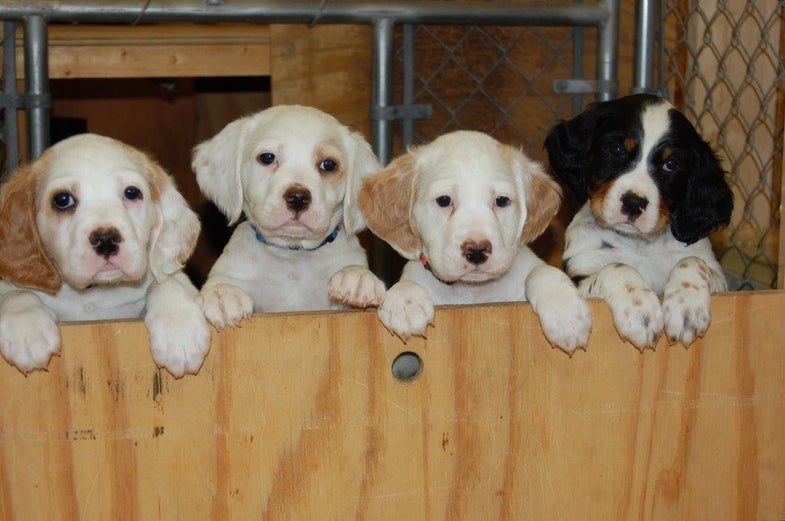 When it comes to training gun-dog puppies, savvy handlers focus first on brains and later on brawn. Lessons learned properly when a hunting dog is young contribute to a lifetime of success. Here’s how to raise a versatile, pointing dog or retriever that’ll make your buddy’s drool. Russ Kelley, the Scientific Services Nutritionist at Eukanuba’s Pet Health and Nutrition Center, says a puppy’s brain is almost fully developed by the time they’re 10 weeks old. “A puppy’s body may take a year or so to fully develop, but their nervous systems grow so incredibly fast during the first few months that it’s important to set up a strong training foundation when they’re young.” You’ll want to introduce them to all of the things they’ll be required to do, like commands, and exposed to in their adult lives, and that includes the environment—the woods and waters—and regular tasks like vet visits and nail clipping.

Set Your Puppy up for Success

Patti Carter of Merrymeeting Kennels in Brunswick, Maine, has been breeding and training German Shorthaired Pointers for nearly 40 years. She’s one of the founders, and current president, of the Yankee Chapter of NAVHDA, and works with lots of different versatile dog breeds. “Over the decades we’ve developed our own puppy program that properly sets up gun dogs for their active lives of training, hunting, and testing,” she says. “The following process makes it much easier for their new owners to develop their puppies into excellent hunting and hunt-test dogs.

“My work starts when the litter is still in the whelping box,” she says. “I keep the whelping box in our living room so I can keep a close eye on the dam and pups during the first three days. I make sure Mom doesn’t step on the pups and that they’re all getting fed and cleaned. To get them used to the human touch I’ll pick up every pup, handle them, and stroke them. Gun dogs are often placed in high-stress situations, so I introduce them to stress by turning them upside down and back again. I introduce them to different noises so they get used to handling different stimulation.”

“At the three-week mark,” Carter says, “I’ll let them out of the whelping box so they can walk around the kitchen. That’s a new experience for them, especially because they’re introduced to even more noises, lights, and commotion. I bring crates into the kitchen and leave the gates off so they can go in and out and learn that a kennel is a safe place which sets them up for traveling in them later on. I bang pots and pans when they’re eating, and that is the first step toward introducing them to the gun at a much later age.”

“Around five weeks, we let them outside into the exercise pen, weather permitting,” Carter says. “They’re puppies and we want them to have fun. We’ll toss toys to nurture their natural retrieving instincts, get them used to grass in the yard, and then take them on walks in the woods. There they will experience seeps and small streams that they’ll need to learn to cross when they hunt, and they’ll get used to fields and the woods. We set up a kiddie pool in the yard so they can go in and out of it, and then play in mud puddles.”

“From that point we’ll introduce them to elements of formal training, and that is around five or six weeks,” she says. “We’ll work with puppies on place boards, run them up and down ramps of training tables, and give them a treat when they sit on the place boards and stand on the tables. That’s their introduction to steadiness and the whoa command. Next, we’ll let them run up hard-flying birds they can’t catch like pigeons or flight-conditioned quail because that brings out their prey drive. Their tails are a tell, so I’ll watch them. If their tails are upright, then I know we’re good. If their tails are straight, then I know I’m pushing them too hard and need to back off and let them have more fun.”

“Owners pick up their pups around seven to eight weeks,” Carter says. “We’ll work with a lot of clients who become friends, and we’ll work on all of those basic steps. At 12 weeks, we work on heeling and whoa. I’ll also drag dead birds through the woods to introduce them to tracking. It’s more of the same in month four with a stronger walk at heel, greater eye contact, and an expanded number of place board (of up to three). I’ll teach them to hold and carry dummies, and when pups are ready we’ll do marks, blinds, and multiple retrieves. Tracking and bird work is ongoing, and the more reps I can do the better.”

Want to know where Thor Kain is at 4 a.m. on a cold, rainy day? He’s roading his field trial setters. That dedication and consistent and deliberate work is how Kain raises puppies to be champions. Kain won the coveted Grand National Grouse Puppy Classic with Full Breeze and the Seminatore Award for the Top Cover Dog with Blast Zone. The co-owner of Pennsylvania’s Cover Dog Setters and amateur field trial competitor believes in setting up puppies for success.

“Over the years I’ve learned that contact, experience, and socialization are keys to developing bold and confident gun dogs,” he said. “I start by handling them shortly after they are whelped, and continue to handle them so they’re used to the human touch. Until they’re between four and five weeks old they loaf around, but I make sure they get lots of human contact. The contact includes different voices, lighting conditions, and sound as well. The more they experience safely, the more confident they’ll be later on.”

“When the pups are about a month old,” Kain said. “I’ll begin socializing them with the world in a contained environment. That’s the perfect time because they’re transitioning off of their mother’s milk and eating solid food, and that’s perfect for new experiences. I let them out two times a day in an outside, fenced-in pen, because I want them to see other people, hear different noises, walk in the grass or through mud puddles and climb around in dog boxes. I keep puppies away from adult dogs until they’re older and then I’ll be watchful. Some dogs just don’t like puppies.”

“Their exposure phase begins at eight weeks,” he says. “I’ll stack them on a bench, barrel, or on top of a crate and make them stand for between 5 and 10 seconds at a time. All the while, I’m stroking them all over, on their back, under their belly, and on their legs. I teach them to stand quietly because it makes breaking later on easier. When they learn to walk with me, I’ll take them outside of the pen and into the woods. I let them run and change directions. They’ll go off on their own, and if they get scared then they’ll come back. Puppies are bold and outgoing, and as a field trialer and hunter, I want bold, confident dogs. Bringing out those qualities is easier when they’re puppies.”

“I like to introduce puppies to pigeons and quail inside of 16 weeks,” he says. “I’ll hold pigeons by the legs above their heads so they can see the wings flap. Some puppies jump up to get the bird while others run away. After the bird has flapped his wings for a while I’ll throw it and let it fly away. I’ll repeat this up to a dozen times. The birds light up the puppy’s prey drive, and after a few contacts, even the timid pups come around. After that, I’ll put out a few birds in the field for them to find and run up. I only put out a few and don’t let them push too hard. Pushing puppies too hard creates long-term physical problems. I’ll also rotate handlers so they learn different voices and personalities. This is a time when I’ll introduce them to other dogs.

“When they’re about 6-months old, I start to look at basic formal training,” Kain says. “I’ll teach recall and have them come to my feet. I’ll teach them to cast in the fields and in the woods, but that’s it. I never teach pointing dogs to sit as they will fold up under training pressure. I also never teach them to heel until they’re broke. If I teach them to heel before they’re broke then they won’t want to run when I’m roading them. Collar conditioning comes at this time, and it’s light. I want my dogs to be a touch wild but not feral, so I’m real careful how much I use the collar. Too much collar stimulation inhibits their spirit and takes off their edge.”

“When the puppies are around a year old, I’ll start the breaking process,” he says. “Since I start competing dogs when they’re derbies, I’ll spend that next year by doing the repetitive work. More bird contacts, more standing their birds, more conditioning and the like. That repetition is where most handlers fall off because it’s boring. But it’s what I focus on, because that polish can be the difference between winning and not placing.”