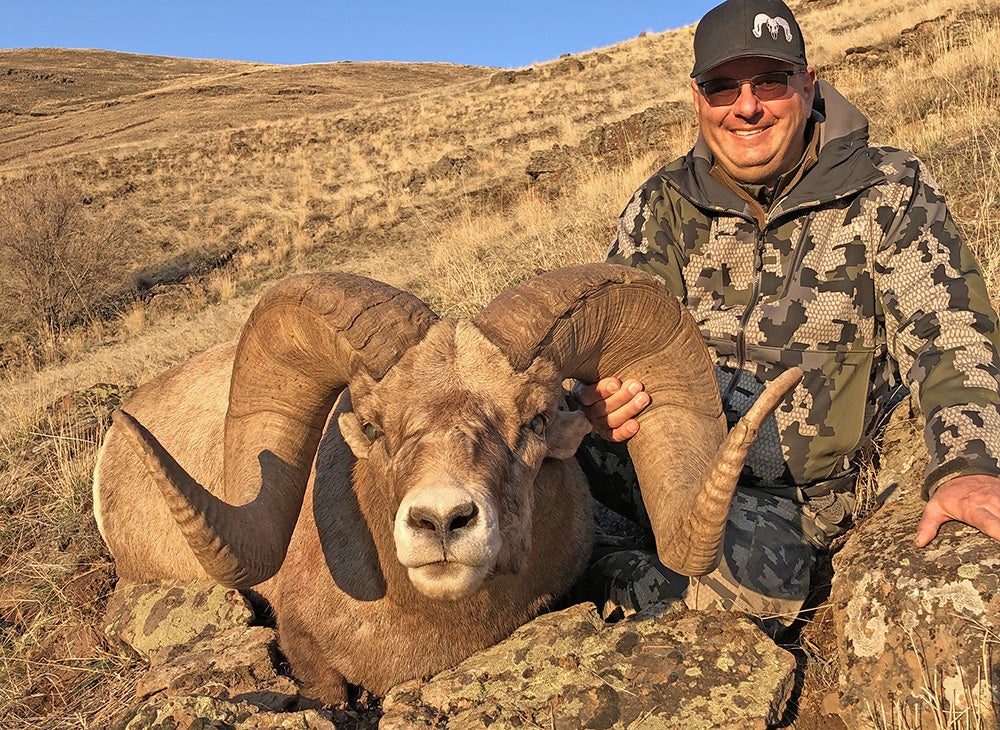 Guerrieri, the PA hunter who took the massive ram, is a sheep hunting fanatic. Boone and Crockett Club
SHARE

A Pennsylvania hunter has set the new Washington state record for bighorn sheep with an incredible ram that he took last year in Asotin County. Gary Guerrieri grew up chasing whitetail deer but fell hard for bighorn sheep hunting in his 50s. He took the record-breaking ram during a week-long hunt in the Grande Ronde River area of the Columbia Plateau, which is in Washington state’s southeastern corner. He was hunting with guides Bryan Bailey and Glen Landrus of Bailey & Landrus Hunting Company.

With a dry score of 202-4/8 B&C points, the ram is not only a state record but also ranks as the 21st largest Rocky Mountain bighorn ever entered into the Boone and Crockett Club’s big game records program, according to a press release. The ram will most likely be invited to be part of the club’s 31st Awards Judges Panel, where the sheep’s score will be verified.

Guerrieri had long dreamed of hunting sheep before he finally decided to take action 11 years ago. “I guess some of us love the mountains, and, to me, the sheep there are as special as they come,” he says. “Once I started sheep hunting, it turned me topsy turvy. Just seeing them, and then figuring out how to get to them is not very easy. It’s very emotional.”

Guerrieri killed his first sheep, a Dall sheep taken in Canada’s Northwest Territories, in 2012. By 2015, Guerrieri had shot four rams that combined for a total of more than 700 inches of horn, making him only the second hunter, he’s been told, to reach the fabled “700 club” with his first four rams. “I tell everyone I’ve been blessed by the sheep gods,” Guerrieri says.

Read Next: 208-Inch Indiana Behemoth Could Be New No. 2 Typical Whitetail of All Time

He still hunts whitetails near his Pittsburgh-area home, and to build stamina for his sheep hunts, he hikes the Pennsylvania hills. “But that doesn’t prepare you for sheep hunting,” Guerrieri admits. “It’s not just a physical hunt, it’s equally a mental game. You have to be mentally focused to get through it. It busts you up.”