There’s a Red Stag On the Loose in Georgia

So far, the big red stag—which would make quite the trophy—has managed to avoid deer hunters 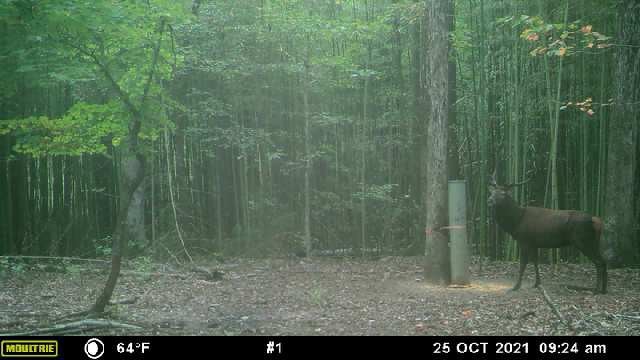 Hunters across east-central Georgia are most likely wondering if their next trip to the woods might be the one that delivers them a deer for the ages—not a big whitetail buck but a statuesque red stag. The deer, which is native to Europe and western Asia but most definitely not the Peach State, is traversing Georgia’s woods. And so far, despite doing this in the midst of hunting season, he’s managed to stay alive. The stag is likely a straggler from a now-defunct deer farm. It has been spotted on tracts of private property spanning four counties and giving hunters the slip for over a month.

“He’s covering an incredible amount of ground, sometimes 15 to 20 miles between sightings on trail cameras,” Georgia Department of Natural Resources (DNR) deer biologist Charlie Killmaster told USA Today. “He’s highly nocturnal. Almost all the images are taken at night, although a few have been recorded during the day. He is showing some sort of rutting behavior, looking for other red deer.”

Red deer are popular on deer farms and raised for the venison market, as well as their marketable shed antlers. Killmaster suspects this stag was from a private farm near the Glascock-Warren county line. The owner thought he had removed all the animals from his property and took the fences down last summer, Killmaster said. But he may have missed one. The first game camera images of the deer were sent to the DNR’s Lt. Brian Adams more than a month ago. They came from Mitchell, a small town in Glascock County, in between Augusta and Macon.

Red deer, when living in an environment with other red deer, participate in an incredible rutting period, known as “the roar.” Contrasted with the shrill bugle of an elk, a rutting red stag’s roar is astonishingly akin to that of a lion, or a bear—it’s guttural, deep, and prolonged. If this wayward stag roared, he might be easier to pinpoint. Killmaster wonders if the absence of the pheromones of red deer hinds or other stags might be keeping this 400-pound-plus big boy tightlipped. The stag cannot interbreed with whitetail deer found in Georgia.

“He’s got to be a little messed up,” Killmaster tells F&S. “I’m really surprised he has lasted this long. Most exotics that get out rarely last a week, especially when deer hunting season is in. Maybe a hunter has seen him but didn’t realize they could shoot him.”

Read Next: Where Monsters Roar: Chasing red stag in New Zealand is a deer hunter’s dream

Mark Williams, the DNR’s commissioner of natural resources, authorized the killing of the stag in late September. Killmaster says the lucky hunter that ends up taking the deer does not need to use a Georgia deer tag on it.

“We’re not going to make a person burn a buck tag,” Killmaster says. “We just want to be notified so the deer can be tested.” While Killmaster doesn’t suspect the deer to be carrying any disease, he said the state will test the animal just to be certain.