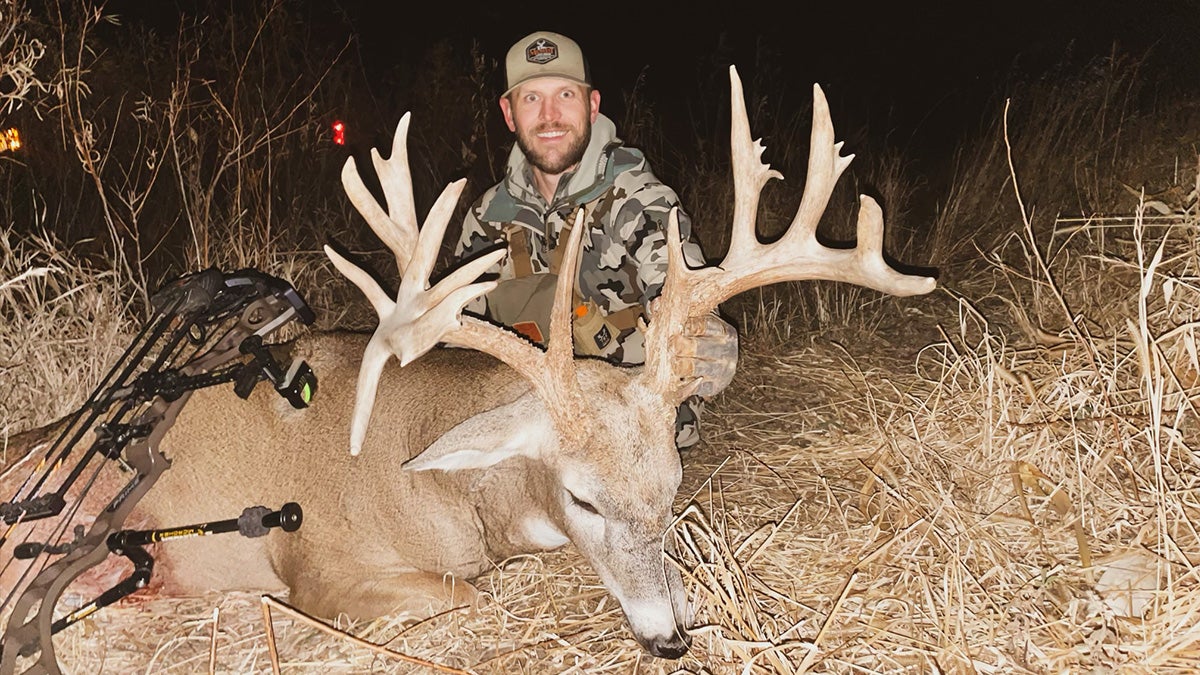 Sam Vedvei used his deep knowledge of deer movement from a lifetime of hunting his family farm to knock down a South Dakota slammer on October 18. He tagged the heavy-racked 17-pointer with only 15 minutes of shooting light remaining. The nontypical 8 x 9 green scores just over 200 inches.

The buck began showing up on Vedvei’s camera in mid-September, always at least two hours after dark. He got five trail cam photos this fall, and after reviewing 2021 photos, he realized the buck had shown up three times last year, too. It took him a while to make the connection because the deer had changed so much. “He was a nice deer in 2021, but not nearly what he is this year,” says Vedvei, who didn’t target the buck last year because it showed up so infrequently. “He grew about 40 inches.”

When a cold front swept through eastern South Dakota in mid-October, Vedvei decided it was time to make his move. “I knew this cold snap was going to be my best chance to kill this buck all year,” he explains. “I live in a heavy ag area, and we don’t have much timber, so deer rely on crops for cover. Once the harvest starts, they pack up and move on.” He sat four consecutive evenings in a stand that overlooked a cornfield with a scrubby two-acre patch of willows, cottonwoods, and native grass at his back without seeing a single deer. Heading to his stand on the fifth and final afternoon of cold weather, he felt confident because the wind, which had been blowing 30 miles per hour, had finally calmed.

“I never saw a deer that night until 7:00 p.m., about 15 minutes before the end of shooting light,” Vedvei says. “I heard a rustling behind me and figured it was a squirrel or raccoon. But when I turned to look, I saw the silhouette of his rack above the chest-high native grass.”

Within 60 seconds the buck had moved through the tangled scrub into an open area 25 yards from his stand. “I had no time to think,” Vedvei recalls. “It was all reaction. He stepped out broadside and my shot was a touch back—I ended up clipping the back of the lungs and caught the liver—and he took off in a dead sprint in the same direction he came from.”

Vedvei was Optimistic He’d Be Able to Recover the Deer

Vedvei has hunted the family farm since he was 12. He lives only a couple miles away and spends time year-round observing deer movement—scouting work that paid off before and after the shot. The stand is actually set up for rifle hunting, not bowhunting, but he knew the grassy area behind the stand and a fence line along the cornfield are prime travel corridors for bucks. When it came time to track the deer—after backing out for three hours—he had a pretty good idea where the chase would end up.

“My state of mind was pretty positive. I was confident that I’d made a lethal shot, and after hunting this same property my entire life, essentially, I know how deer travel in and out of the area,” he says. “I basically knew exactly where he’d go, but when you’re tracking a deer, obviously you want to do it right and follow the blood.”

Still, there were some tense moments as Vedvei painstakingly followed the blood trail through black-dirt crop fields in the dark, sometimes on hands and knees. He eventually located the buck about 400 yards from where he hit it. He was shocked at what he found.

“From the camera photos, I kind of figured this deer to be probably in the 170s to low 180s,” he says. “He was one hell of a surprise when I stepped up to him. He was bigger than I thought. He just carried the mass all the way through the rack, just a way bigger deer than I thought.”

Green scores by an official Boone & Crockett scorer put the rack at 200 6/8 with an inside spread of 21 6/8 inches. The left beam scores in the mid 80s and the base measures approximately 7 inches around, with circumferences far out toward the end of the beam still topping 5 inches. “The right side is just a spectacle. He’s got so much going on,” Vedvei says. “He’s got a split G2 with a kicker coming off it, and there’s one point that’s broken and another that apparently got dinged up when he was in velvet. He’s just an incredible deer.”

Vedvei hasn’t yet submitted the teeth for aging, but his taxidermist, who examined the lower jaw, estimated the buck to be 7 ½ years old. With a chuckle, Vedvei credits “hard work and dumb luck” for his success in harvesting such a wily old warrior.

“The hard work comes in keeping an eye on these deer and figuring out how they move and react,” he says. “But dumb luck is what it took for the deer to come in, no doubt about that. I mean, this deer had never daylighted on any of my cameras in two years, and all of a sudden I got a shot at him.

“Honestly, I’m still in complete disbelief. For me and where I hunt and how my season typically goes, to even get an opportunity to see a deer of that caliber on the hoof is almost more exciting than being able to shoot it. To walk up and actually find that deer—the amount of disbelief, shock, relief, elation—man, it’s just a mixed bag of emotions. I still struggle to come up with words to describe exactly how that feels.”