A Q&A with founding members of the Arizona Sportsman's Trail Cam Defense Fund, which is raising money to wage a legal battle against the controversial new rule 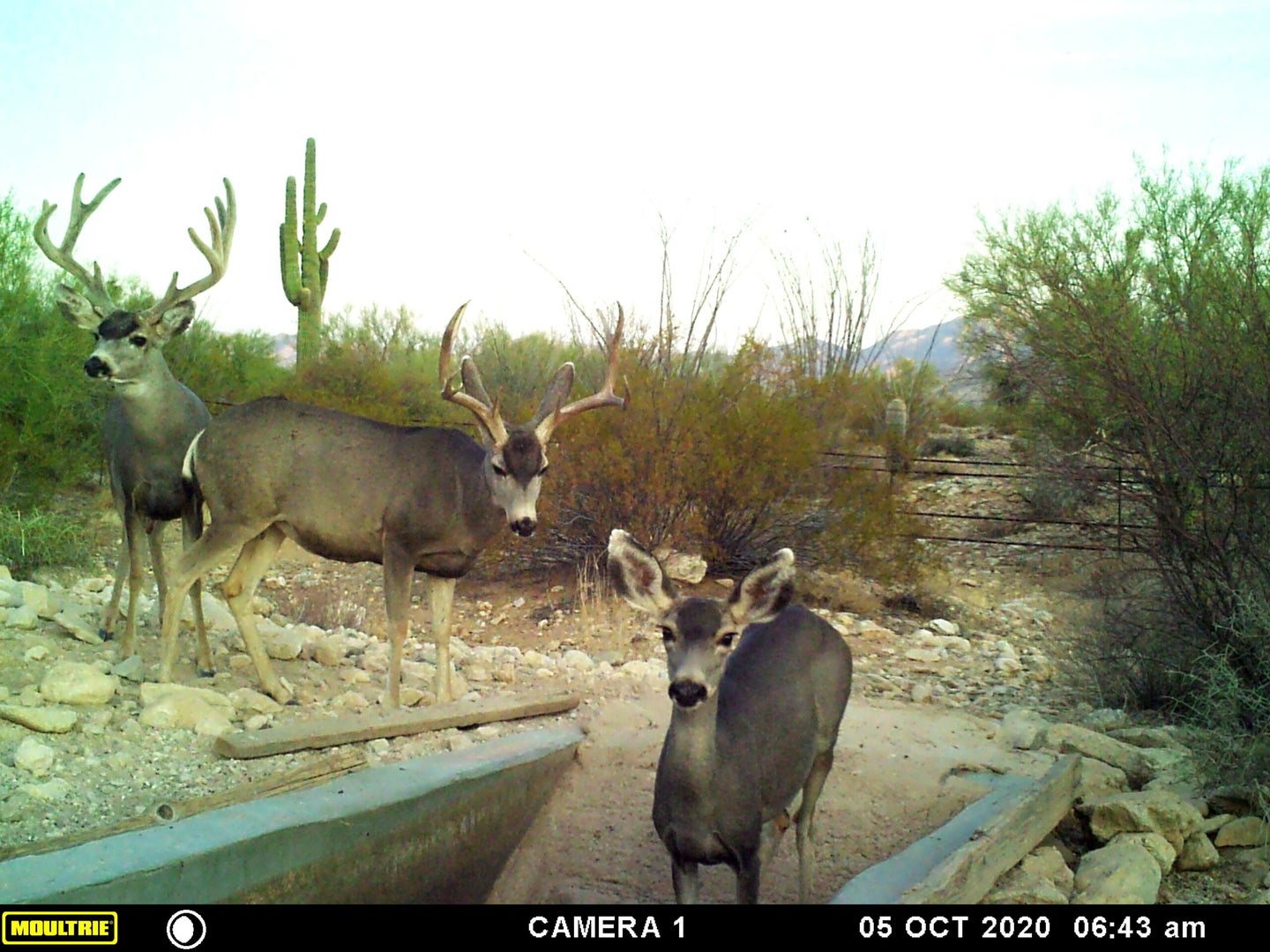 Hunters from all over the country who use and like their trail cameras omitted a collective “Huh?” late last month when the Arizona Game and Fish Commission deemed the devices a violation of fair chase and voted to approve the nation’s first year-round, statewide trail-camera ban for the purpose of taking game.

Last week, we asked Kurt Davis, chair for the five-member Game and Fish Commission, why he and his fellow commissioners felt they needed to take trail cameras out of hunters’ hands. You can read the full interview here, but in a nutshell, he explained that Arizona is unlike the country’s many water- and cover-rich states when it comes to trail-cam use. In a dry state where the locations of public water sources are well known, there can be as many as a dozen cameras on a single source. While one cam owner is actively hunting a water hole, another might waltz in to check a card, blowing up the other guy’s chances in the process. The current drought hasn’t helped matters, and all of it has led to increased hunter-on-hunter conflicts, according to the commission, as well as complaints from ranchers who build and maintain many water catchments.

But more than anything else, it seems, it was the question of fair chase that led to the outright ban. “In an arid state with highly limited water sources, do cameras really allow an elk or deer a fair chance of escaping detection?” Davis asked in last week’s interview. In essence, the commission answered, No. And Davis argued that Arizona’s special circumstances required special restrictions.

The state’s hunters don’t necessarily disagree with that notion, generally speaking. They accepted restrictions on live-action and cell cams back in 2018. But for many, an all-out ban goes way too far. And it’s not just the ban itself that has some hunters livid; it’s also how that ban came to be.

This week we spoke to Josiah Scott and Ron Nixon of the Arizona Sportsman’s Trail Cam Defense Fund. Nixon is the owner of Broadhead Nation, a 20,000-plus-member social-media group of hunters and archers from all over the world. Scott has become the face of the AZ trail-cam ban resistance, which now has thousands of supporters. Together, along with some other key Defense Fund members, they started a GoFundMe page to bankroll legal action aimed at ending the cam ban. Here are our questions and their answers.

F&S: When did the trail-camera issue reach a point where you felt you needed to organize and take action?

Nixon: Back in 2018, the commission proposed a ban on live-action and cell cams, as well as a restriction on using any cameras within a ¼ mile of a water hole. We didn’t push back on the cell-cam ban because we could understand the fair-chase issue there. But the ¼ mile ban was a problem. That would essentially eliminate trail-cam use in the very places hunters would use them. The cell-cam ban passed, but the ¼ mile ban didn’t. Still, we worried that any restrictions could become a slippery slope, and it seems like it has.

Scott: In 2018, we were lone wolves. A number of us sportsmen were fighting this separately, without knowing each other. But this past December, when the commission first proposed a total ban, we became more of a wolf pack.

What happened at that December meeting that changed things?

Nixon: We thought we were attending a public-comment session to discuss the possibility of further restrictions—to find a middle ground. But when we got there, we learned that the commission had gotten permission from the Governor’s office to hold an emergency rule-making session and that they wanted to vote on a total ban. That’s when 20 to 30 of us really stepped forward and organized.

Scott: We wanted to know how the commission got around our Governor’s long-standing moratorium on rule-making. We did a public records request and learned that the commission asked for and was granted an emergency rule-making session by claiming that trail cameras presented a “significant threat to the public health, peace, and safety.”

At one of the public meetings, you called that claim a lie, Josiah. Do you stand by that?

Scott: Well, we also received public records on trail-cam related conflicts, and the majority of those complaints were just people seeing trail cameras where they didn’t want them. According to those records, in 11 years the AGFD received only 9 complaints total—and only three since 2018. So where is the big “increase” in complaints, and where is the “significant threat to public health and safety”? When a Game and Fish representative told us they were afraid someone was going to get shot over this issue, I was flabbergasted. I almost fell out of my chair. Sure, there’s been some strong language on social media, but words are not guns.

Nixon: At the final meeting on June 11th, when the ruling was made, Region 2 Supervisor Larry Phoenix claimed that two guys were pointing guns at each other on a buffalo hunt over trail cams. We talked to the hunters and the guide involved. They said the dispute was over a salt lick and had nothing to do with the trail cams. It was an unverified case that had not been fully investigated. This was their “evidence.”

So, you think the commission exaggerated the public safety threat to get around the rule-making moratorium and ultimately issue a full ban based on fair chase?

Nixon: It was a bait and switch. During the entire public process, they hardly talked about the so-called safety issue. It was all about fair chase. They moved the goalposts on us.

During the 2018 public meetings, Commissioner Eric Slocum Sparks publicly acknowledged that non-cellular trail cams were not a fair chase issue. He said he’d consulted the major sportsmen’s conservation organizations, who agreed that these cams were okay, and that was part of why the commission voted down the ¼-mile ban then. Yet, this time the commission argued just the opposite.

You believe that the vote itself was a foregone conclusion, too. Is that right?

Nixon: The vote was unanimous, despite the fact that commissioners are not allowed to discuss their votes as a group ahead of time, and despite the fact that the public comments were overwhelmingly against the ban. In the final public-comment period, which ended in May, it was 1,019 opposed versus 71 for the ban. During the public comment period in that last meeting, I would say people were 80-percent opposed. The commission is required to give fair weight to public comments, but clearly they didn’t. All five of the commissioners came to that meeting with a 10-minute prepared statement explaining why they were voting for the full ban, most citing fair chase issues.

Related: Why the Arizona Game Commissioner This Banning Trail Cameras is OK

You have said that you’re open to “decent restrictions” on trail cams. What would those entail?

Nixon: I offered a proposal, even though it would hurt a little for hunters and outfitters. I suggested that 48 hours prior to and through the end of your hunt, you cannot use a trail camera. Plus, you reinforce the hunter-harassment law; if you are checking a camera and interrupt someone’s hunt, you can lose your license. Everyone who has looked at that proposal has said it would be the most enforceable.

We’d also be open to a rule that during the season, you can only check your cams from, say, 11 to 1, which would vastly reduce the odds of interrupting someone else’s hunt. So, yes, there are better ways to do this.

Okay, but the commission’s main focus now is on fair chase, right? So, I’ll put it to you. Do non-cellular cameras violate fair chase in Arizona?

Nixon: Just because you have a picture of an animal, doesn’t mean you’re going to kill it. In 6 years of using trail cameras, I have yet to pattern an animal, let alone kill an animal that I thought I’d patterned. But the commission can’t understand that because they’ve never used a trail camera. One commissioner hasn’t hunted the state of Arizona in 9½ years. A second is a lifelong cattleman who doesn’t hunt, and a third is a cattleman who hunts turkeys occasionally. How can they make a determination on the fair chase implications of trail cameras if they’ve never even touched one?

Do you think the AGFD has good intentions and simply got this one wrong, or is the department and the commission unfairly sticking it to hunters?

Nixon: I do believe that the Game and Fish has good intentions on managing wildlife. I have faith in the integrity of many people at Game and Fish, and I truly believe that they do the best job in the country, given our assets. But, I believe that this trail-cam ban is the result of a personal agenda driven by one commissioner. I’ll stop short of saying what I think his motive is, because I can’t prove it yet.

What’s the next step? Will you be bringing a legal suit, and do you think it’s still possible to overturn the ban?

Scott: We have some other steps, but we don’t want to tip our hand. So let me answer your question this way: Are we prepared to follow through with a lawsuit? Yes we are. But we will also do what we can to avoid that. We do think it is possible to overturn the ban because the entire process was based on a lie. Commissioner Davis is leaving next January. Our hope is to get this rule overturned, by the lawsuit or otherwise, and then get to the negotiation table with a newly headed-up commission and work with them and Game and Fish to iron out some reasonable restrictions that address our unique problems and still allow hunters to use and enjoy their trail cameras.

Related: Is It Cheating to Use Wireless Trail Cameras?