Researchers Are Trying to Eliminate “Deer in Headlights” Auto Accidents

In tests so far, a unique headlights rig has drastically reduced the number of "dangerous" car-deer interactions on the road at night 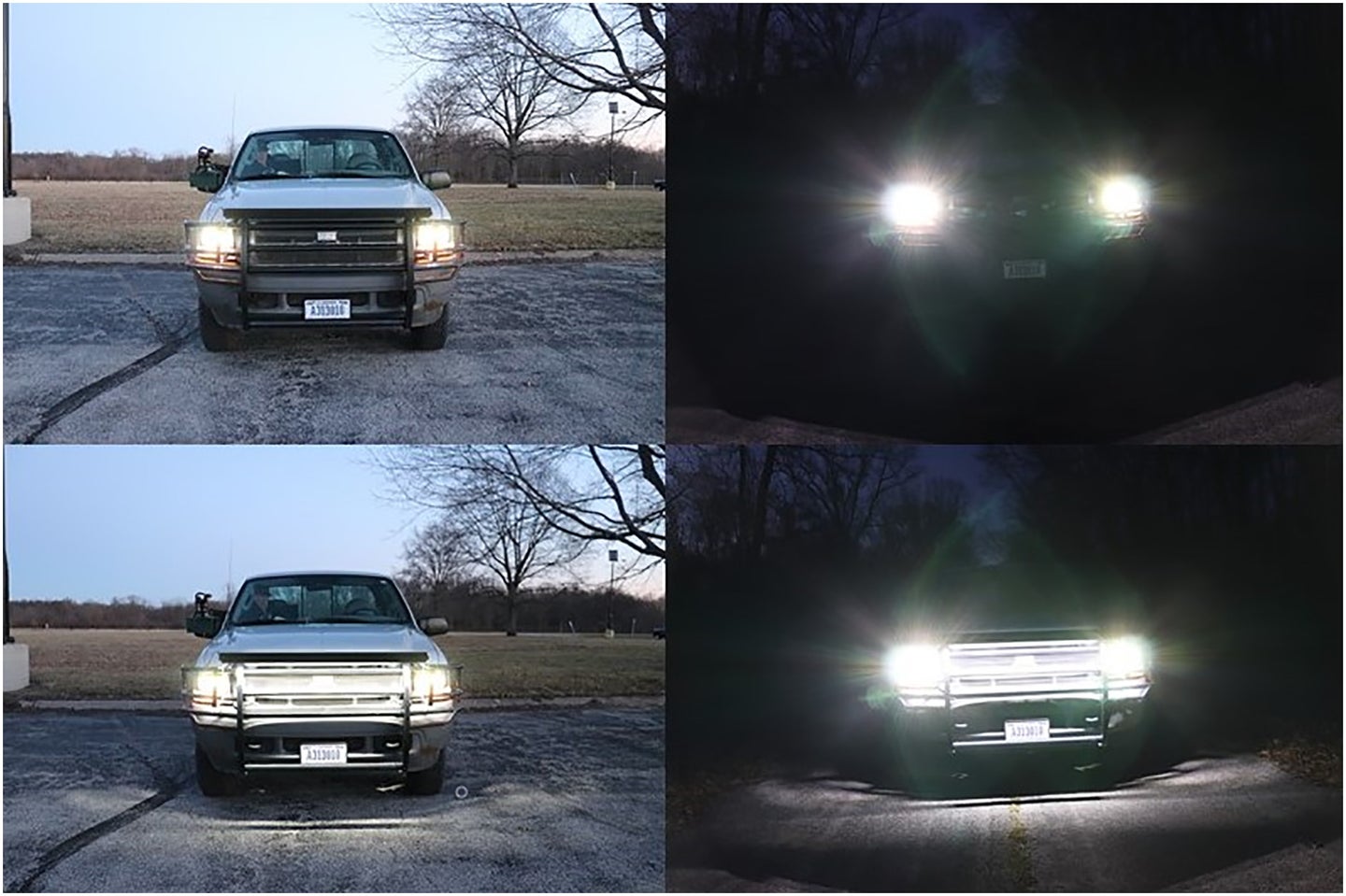 These images show the difference in the “looming” appearance of the approaching F-250 equipped with headlights (top) versus headlights plus a rear-facing LED light bar (bottom) attached to the vehicle’s brush guard. The vehicle’s high-beam headlights are on in all images. USDA
SHARE

Researchers in South Carolina are working to remedy the old “deer in headlights” phenomenon—that tendency deer have to freeze as vehicles approach at night. The goal is to reduce deer-vehicle collisions, wrecks in which drives try to avoid deer, and attendant property damage and death—both human and deer.

The studies, which began in 2018, by the U.S. Department of Agriculture Wildlife Services program investigated how vehicle lighting might influence deer behavior on or near roads. Travis L. DeVault, now associate director for research and senior research scientist at the University of Georgia’s Savannah River Ecology Laboratory, began the work while he was with the federal government.

Free-ranging whitetail deer at the National Aeronautics and Space Administration Plum Brook Station near Sandusky, Ohio, were approached 62 times by a gray Ford F-250 truck with black plastic grille traveling at a set speed of 60 kilometers per hour (about 37 mph). The truck was equipped with a rear-facing LED light bar designed to illuminate the full grille to make the vehicle loom larger, giving deer a better idea of what was coming versus the two blinding pinpoints of light they usually see with basic headlights. The light bar was approximately level with the hood and aimed downward at 45 degrees toward the grille to negate effects on driver visibility. The truck also used a forward-looking infrared camera to allow detection of deer up to about  800 meters away, much farther than possible with headlights alone. The deer were videotaped as the truck approached.

As researchers predicted, using the light bar lessened the number of interactions deemed “dangerous.” Across 62 vehicle approaches involving more than 100 deer, 37 involved individual deer. The biggest group was six. Eleven of 31 approaches using only high-beam headlights were categorized as dangerous, with the deer not getting out of the way until the vehicle was less than 50 meters away. When the light bars were on, only 3 of 31 interactions were deemed dangerous. Vehicles approaching without the frontal illumination were 3.6 times more likely to have a dangerous encounter.

Which way the deer moved in response to the better-lit vehicle typically related to where the best roadside cover was found, even though hiding in vegetation means nothing in terms of avoiding an oncoming vehicle at night. This meant they sometimes took a longer route, crossing the full road if needed to reach optimal cover.

A report from the study, published in July 2020 in the journal Ecosphere, also pointed out that most automobile accidents associated with wildlife that result in human injury occur when drivers swerve to miss the animal and subsequently lose control of the vehicle or collide with other vehicles or objects. The authors noted that the ideal vehicle-based collision mitigation system for deer would make the deer flee the road before the driver felt an evasive maneuver was needed.

A referenced study indicated that most drivers fail to see deer along roads until they were within 50 meters of the animals (decoys were used in this study). Getting these roadside deer to flee early lessens the chances for accidents.

DeVault tells F&S that further testing is now taking place in South Carolina at the Savannah River Site. There, a University of Georgia graduate student is studying the effect of the lighting method on all animals—not just deer. “We’re especially hoping to get enough data to see how well it works on wild pigs,” DeVault says. “We are only about halfway through data collection, so we don’t yet have any results to share.”

Dr. Olin Rhodes Jr., director of the Savannah River Ecology Laboratory, told a group of South Carolina writers that approximately 1.25 million deer and vehicle collisions occur annually. Numerous insurance studies peg annual losses at billions of dollars with hundreds of people dying and many thousands more injured. Rhodes said a patent application has been filed on lighting technology. The lighting could be added to vehicles as an aftermarket device.

DeVault said there aren’t any firm takers on development of the patent yet, which is owned by USDA, but Rhodes indicated that discussions with at least one vehicle manufacturer are underway to see if these lights could be built in at the factory.