Waiting for the rut to hunt public land whitetails? Well, don't. You can tag a great buck now by focusing on water sources. Heres how 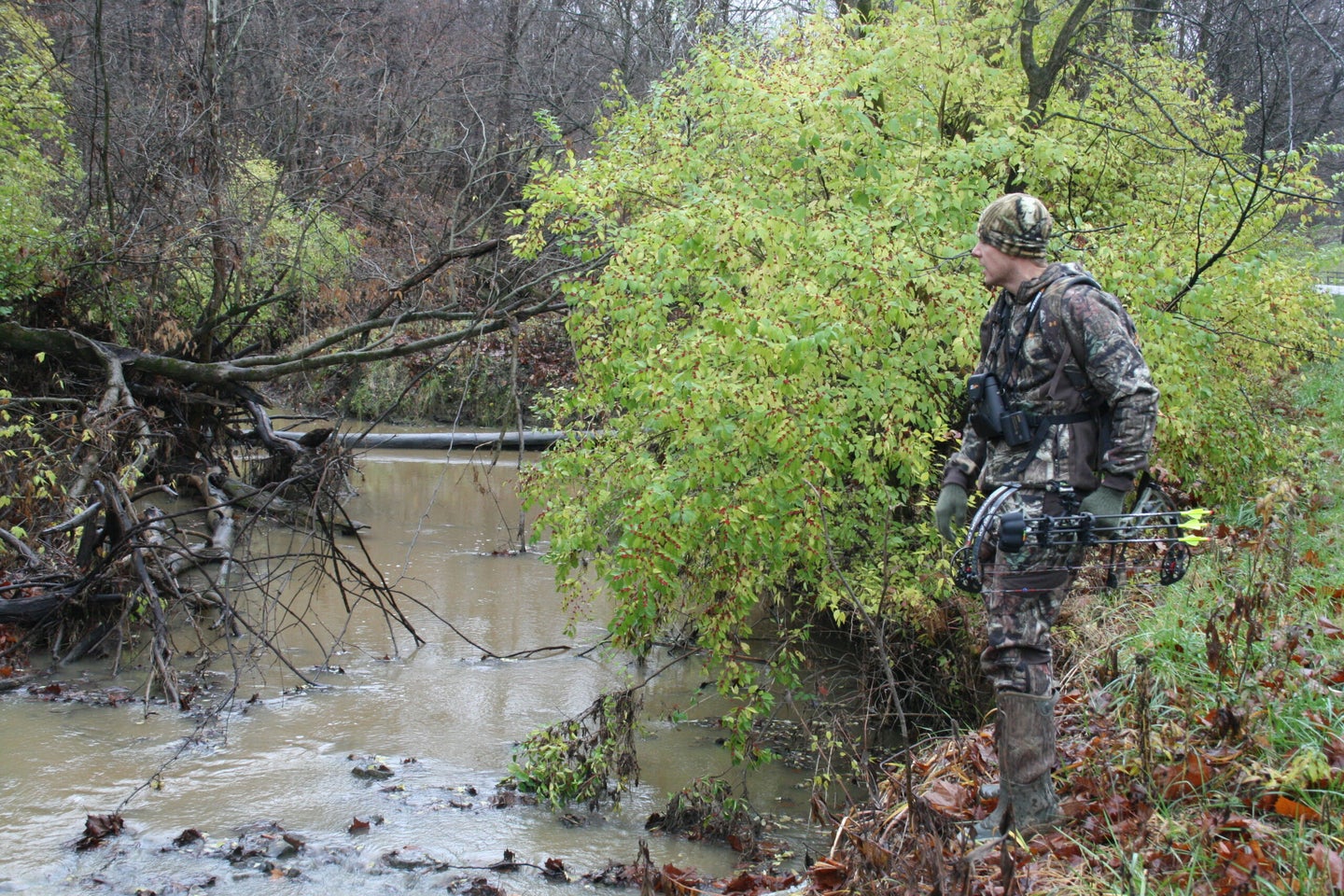 The author scouts a deer crossing on a public-land waterway. Jace Bauserman
SHARE

When it comes to tagging big whitetails on public land, the early season flies way under the radar of most hunters. By early, I’m referring to the period between September 1 and October 5. Why? Most hunters want to chase the rut. I don’t blame them. The rut can be rocking when you hit it right, but it also draws legions of bowhunters to open-to-anyone ground.

During the early season, you can have some of the best public spots to yourself, and while overall deer movement may not match the rut, bucks tend to be far more predictable. I know, public land doesn’t typically have the alfalfa and clover and bean fields that create comparatively easy bed-to-feed opportunities for private-land bowhunters now. But it offers something else that makes patterning early-season bucks nearly as easy: water. If you know how to take advantage of ponds and creeks and rivers, they can make early-season public-land hunting almost as good as the rut. Even better, in some cases.

Waterways are important to whitetails for two main reasons. First, rivers, creeks, and streams allow deer to slurp while they travel. Second, they create natural funnels for them to get from point A to point B. Pinpointing exactly where deer will get a drink in moving water is all but impossible. So what you want to look instead for are areas along waterways where natural funnels, pinch points, and crossings occur. You can do some of this with a digital-mapping system well before your hunt begins. One of my favorites is where creek- or river-bottom timber abuts a high, steep bank along the water, creating an ultra-tight pinch point that deer have to move through.

When you put boots on the ground, scout for a pounded trail that slides through such an area, and then scout upstream and down, while keeping early-season wind patterns in mind. Look for shallow points where deer can cross easily, and pay close attention to any sandbars. Big buck tracks are easy to identify in the sand. If you find a crossing pounded with tracks, be sure to give those tracks a good once over. During the early part of the season, it’s common for does, fawns, and young bucks to use one crossing and mature bucks another. Typically, the mature buck crossing will be less defined and be 80 to 100 yards from the central hub crossing.

If you can find a good ambush point near the buck crossing, that’s the place to put your stand. f not, I like to hunt the nearest pinch point within 150 yards of a major crossing.

Even if you don’t find an obvious funnel, you’re still in the game. Jump on your digital-mapping app and look for nearby private-land crop fields that lead to a public waterway. Next, look for the heaviest bedding timber on the public side. Before diving in and investigating, gain a vantage point that allows you to overlook the river and private-land ag fields and spend an evening glassing. If gaining elevation isn’t possible, post up on a county road with a window-mounted spotting scope and pay attention to where deer enter the field during the evening. You can repeat this process in the morning, and often, you’ll catch deer leaving the area toward the water and public bedding timber. It usually pays to give up a day of hunting to do some boots-on-the-ground scouting. Once you nail down a pattern, pay attention to wind direction and move in for the kill.

Yes, you are making a bold move here. You’re rolling the dice and pressing in tight to a predicted bedding. But don’t freak out. You’re not hunting a manicured farm, and you don’t have 40 days to hunt. You need to strike while the iron is hot. Strap a stand and sticks on your back, and head in early. Find the best tree that offers good shooting lanes, and keep an eye peeled for an area where multiple trails intersect. If these trails intersect right along the waterway, all the better. Stay on the downwind side of bedding, strap in, and get it done.

Early-season temps can be torrid, which means bucks need to slake their thirst often. My absolute favorite early-season technique for pulling the dupe on a public-land buck is to find an isolated waterhole. This may be a small pond tucked into the timber, a guzzler created for game birds, or a rancher’s stock tank. The tighter this cover is to bedding and natural browse, the better. Locate these areas on your digital mapping system. Take your time when looking for water sources. Often, you’ll have to zoom in and study your map. When doing this, I prefer a computer screen over that of an iPhone. Another option, and one I’ve found very handy, is a paper map of the area. Most BLM, National Forest, Walk-In Area paper maps show water sources.

Don’t go into any water source unprepared. Be ready to go in and hang-and-hunt. I like to visit these sources during the early-morning hours, shortly after I feel like deer have bedded down. Tracks are king. If you find a water source littered with tracks, and large buck tracks are prevalent, get in a tree or build a natural ground blind. If the water source seems to be so-so, hang a camera, if legal, in your area. Game cameras allow you the ability to monitor a hole you’re not hunting, and when you return to check the card and find that a gagger buck is drinking every day, you’re now one step ahead of him.

Patience is the name of the game here. Like hunting pronghorn, you never know when a buck will get up out of his bed, snatch some browse, and come guzzle. Sitting waterholes is an all-day affair, so be sure and prepare accordingly. The long wait will be well worth it when a public-land bruiser shows up for a drink.