In 2021, as bag limits were cut, Tennessee used a hunter-funded marketing campaign to recruit out-of-state hunters. Nonresident license sales spiked, along with the public-land harvest 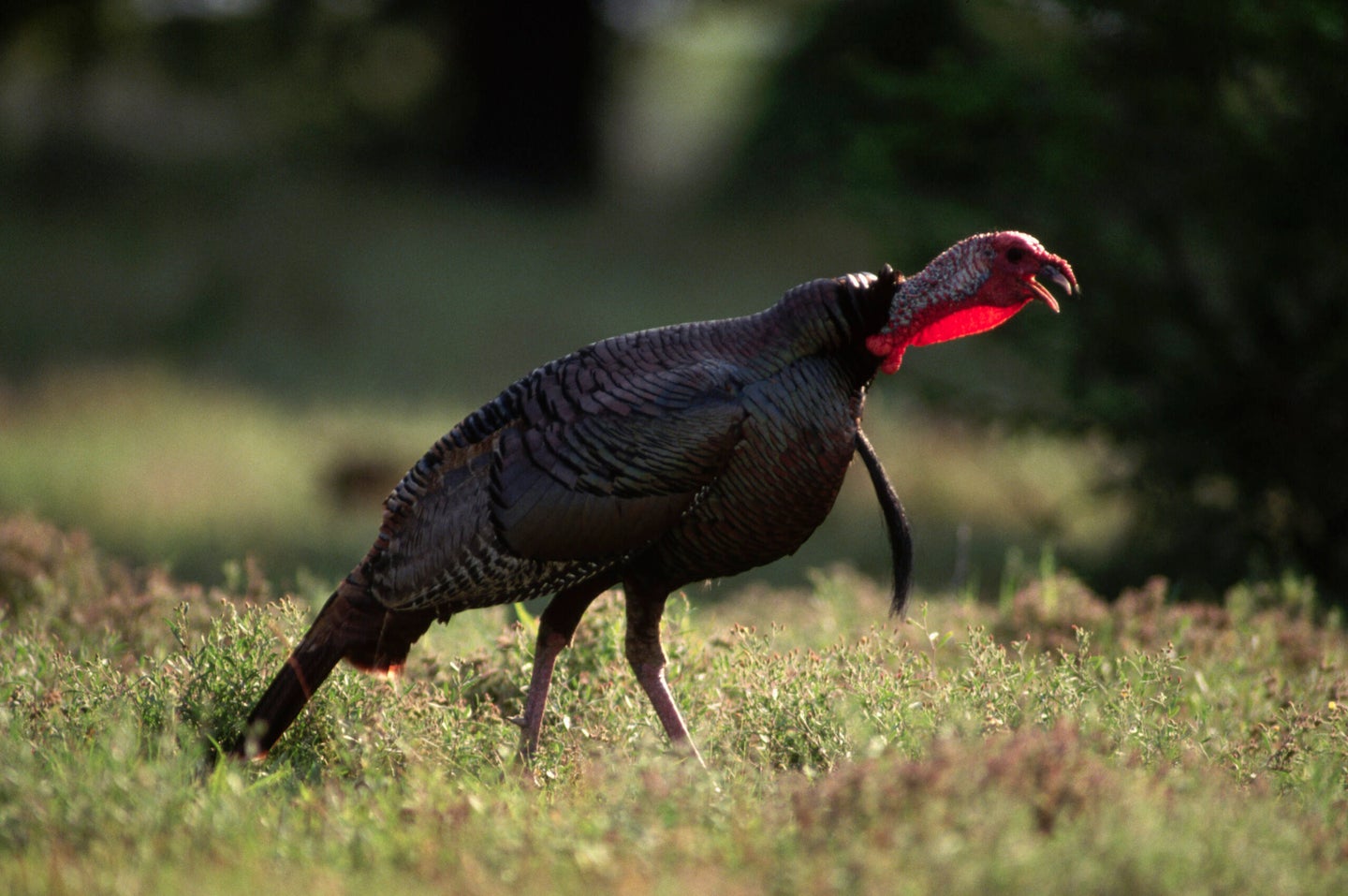 Many hunters, in the Southeast particularly, have been seeing less of this each spring. Raymond Gehman/Getty
SHARE

Wild turkey populations have been on an alarming decline in much of the country over the past several years, and no region has felt the effects more than the Southeast. The reasons for the declines are complex and not fully understood. Habitat loss, predators, and bad weather have gotten much of the blame. But some turkey biologists and many hunters believe that we’ve also been hunting them too hard. Historically, seasons have opened early and have run long in states like Alabama, Mississippi, Georgia, and Tennessee, with bag limits of four to five birds per spring.

Now, many avid hunters are ringing the alarm bells, deeply concerned about the future of the wild turkey resource. A survey of Tennessee license holders following the 2021 season showed that 60 percent believed the state’s flock was in decline. During a Tennessee Wildlife Resources Agency commission meeting following the 2020 season, District 2 Commissioner Kent Woods said, “We have overshot our flock. In my areas, over the last five years, I know I don’t have half the turkeys that I used to.”

Like most southeastern states, Tennessee has made some changes. Before the 2021 season, the four-bird season bag limit was reduced to three statewide and cut to just two in a few of the hardest-hit counties, in which the season also opened later. Other southern states have embraced similar and more restrictive changes. Arkansas, Georgia, and Alabama are all opening later in 2022 than they traditionally have, and with fewer birds in the bag limit. Alabama is prohibiting decoys for the first portion of the season. Those incremental losses of opportunity overwhelmingly impact resident hunters, but most embrace them as necessary.

But what if at the same time a state was taking such steps, it was also using a hunter-funded marketing campaign to promote the sale of nonresident turkey tags? What if the resulting influx of nonresident hunters left WMAs more crowded than ever and contributed to a near-record public-land harvest?

You’d have some rightfully pissed-off resident turkey hunters, right? But in Tennessee, at least, that seems to be exactly what’s happened. At the same time biologists and commissioners were talking about cutting bag limits, marketing and outreach staff were airing a video starring social-media hunting influencers to promote public-land turkey hunting in Tennessee.

Volunteer State turkey hunter Cameron Weddington is among those avid sportsmen deeply concerned about wild turkeys. Co-host of The Turkey Hunting Podcast, Weddington, 27, also has a large Instagram following as @TheGobfather49. He’s a self-described traditionalist who says he’s “saddened by the current state of turkey hunting.” He doesn’t like fanning or reaping or shooting turkeys at long range. Simply put, he believes we’re hunting turkeys too hard, and too effectively.

Weddington also follows the popular Youtube channel and podcast platform The Hunting Public (THP). Back before the 2021 turkey season, he’d heard it mentioned during a THP podcast episode that the group would be going back to Tennessee that spring because Tennessee “wanted them to promote nonresident license sales.” Then last spring, he saw that the TWRA had posted a video to its social channels hosted by THP co-owner Aaron Warbritton, who while posing with a dead gobbler said: “A question we get asked all the time at THP is which state is our favorite to hunt… For turkeys, hunting Easterns, Tennessee is really hard to beat. If you’re looking to travel to hunt anywhere, you ought to look into Tennessee.”

Weddington couldn’t shake the suspicion that his state agency was spending money promoting nonresident tags while restricting opportunity for resident hunters over resource concerns. So, he began filing public records requests to see if the TWRA had indeed paid THP for the promotional video. He finally got a response from Jenifer Wisniewski, the chief of outreach and communication for the TWRA. In the email response below, Wisniewski confirms that the agency did pay THP and where the money came from.

I think our portion is around $10,000. I don’t actually know because TWRA doesn’t actually pay that bill. [T]he money is from our hard card sales and our license vendor pays that bill.

The work with The Hunting Public has resulted in more resident and nonresident recruitment and reactivation of hunters. Those license sales give us resources to put more habitat and research on the ground to make turkey (and other species) hunting better. I understand that you are offended by inviting nonresidents to Tennessee to hunt, but it is a good thing. Compared to other SE states, Tennessee has very few nonresident hunters.

The “hard card” sales referenced are a $5 upgrade you can get when purchasing your hunting license through the Go Outdoors Tennessee portal, a platform that is administered and managed by the marketing group Brandt. It’s not clear upon purchase where the money for that card goes, and there’s certainly no indication that any of it goes to recruit nonresident hunters. After corresponding with Wisniewski and researching harvest and license-sales data, Weddington posted this video on his Facebook page.

I reached out to THP co-owner Aaron Warbritton, and he acknowledged that THP did work with the TWRA, as well as other states including Georgia and Iowa, to film some promotional videos. They were paid by Stone Road Media, a marketing agency that sub-contracted by Brandt. THP’s portion of the $10,000 Wisniewski referenced was $7,000, and Warbritton says there were multiple deliverables included in that.

“Mostly we’ve been tasked with creating instructional and promotional content for the states’ licensing and harvest reporting apps,” Warbritton says. “The state of Tennessee didn’t pay us 10 grand to promote nonresident turkey hunting. That’s just not true. We work with them on deer hunting stuff as well.”

The video shared last spring also suffered from bad timing, since most of the content used in the Tennessee campaign was filmed in the spring of 2020, prior to the reduction in bag limit. Warbritton says at that time, numerous states, including Tennessee, were concerned about a substantial decline in license sales. No one could’ve anticipated the reset in license sales that followed the COVID-19 pandemic.

The money THP received ultimately went to a good cause, too. “We’ve made somewhere between $16,000 and $20,000 off springtime projects with states, and all of that money has been spun back into turkey research,” Warbritton says. In fact, with the help of their audience, THP has raised $39,000 toward funding turkey research, including a couple cooperative research projects happening right now in Alabama and Georgia.

So, to Tennessee’s rightfully upset resident turkey hunters, it doesn’t seem right to be upset with Warbritton or THP. The question is, did the state handle things properly?

The timing is here key. The promotional video was made during the spring-2020 season. In recent years prior to that, Tennessee’s hunting license sales had been flat or down, but in 2020, the state had the highest growth in hunting and fishing license sales in the nation. Weddington saw the video on the state’s social channels in March leading up to the 2021 season, after a year of strong license sales and a record-setting public-land turkey harvest—and just ahead of a season for which the game commission decided to reduce bag limits to protect the declining resource.

Following the 2021 season, Weddington began comparing Tennessee’s recent turkey-harvest data and uncovered some eye-opening results. From 2015 to 2019, the yearly average harvest on Tennessee’s WMAs was just 1,668 turkeys per spring. (Curious, I looked back to the average WMA harvest from 2006 to 2010, when turkey numbers were booming. It was 1,256 turkeys.) And yet in 2021, despite the bag-limit reduction and all the concern over a dwindling resource, hunters took a near-record harvest of 2,422 birds on state WMAs.

In fact, the only season with more public-land turkeys killed in Tennessee than 2021 was 2020, when hunters shot about 100 more birds. That year has, of course, been called an outlier due to the pandemic, and particularly so because Tennessee didn’t close its borders to out-of-state turkey hunters when neighboring states like Kentucky did. Perhaps even more telling, though, are the nonresident license-sales statistics. Despite an overall increase from 2019 to 2020, there was actually a drop in 7-day nonresident license sales in 2020, according to data provided by the TWRA after Weddington made an open-records request. And yet, in 2021, the year the promotional video aired, there was a sharp increase in nonresident license sales. Those 7-day licenses were more than double what they’d been in 2020, and 74 percent higher than the three-year average.

Simply put, hunters killed a lot of public-land turkeys in 2020 because they had more time to hunt. In 2021 they killed nearly as many, even with a reduced bag limit—but because there were more nonresident hunters in the woods. Weddington couldn’t ignore those facts, which is why he posted his findings on his facebook and instagram pages. “I want to feel like my contributions to turkeys in Tennessee are being well used,” he says. “I hunt our WMAs, and they’re not getting much care in my estimation. Yet the state is spending money to market hunting of birds that are in decline.” Throughout, Weddington has been clear that he’s not out to criticize anyone, or to bash the state. He says he simply wants to lay out the facts, and let fellow hunters decide if this is the right course for managing such a highly valued resource at a time when it is so vulnerable.