Ray Smith took his 209-inch mule deer in 2018, and brother Clay his 83-inch antelope the following fall. They are likely the only twins in the B&C record book. 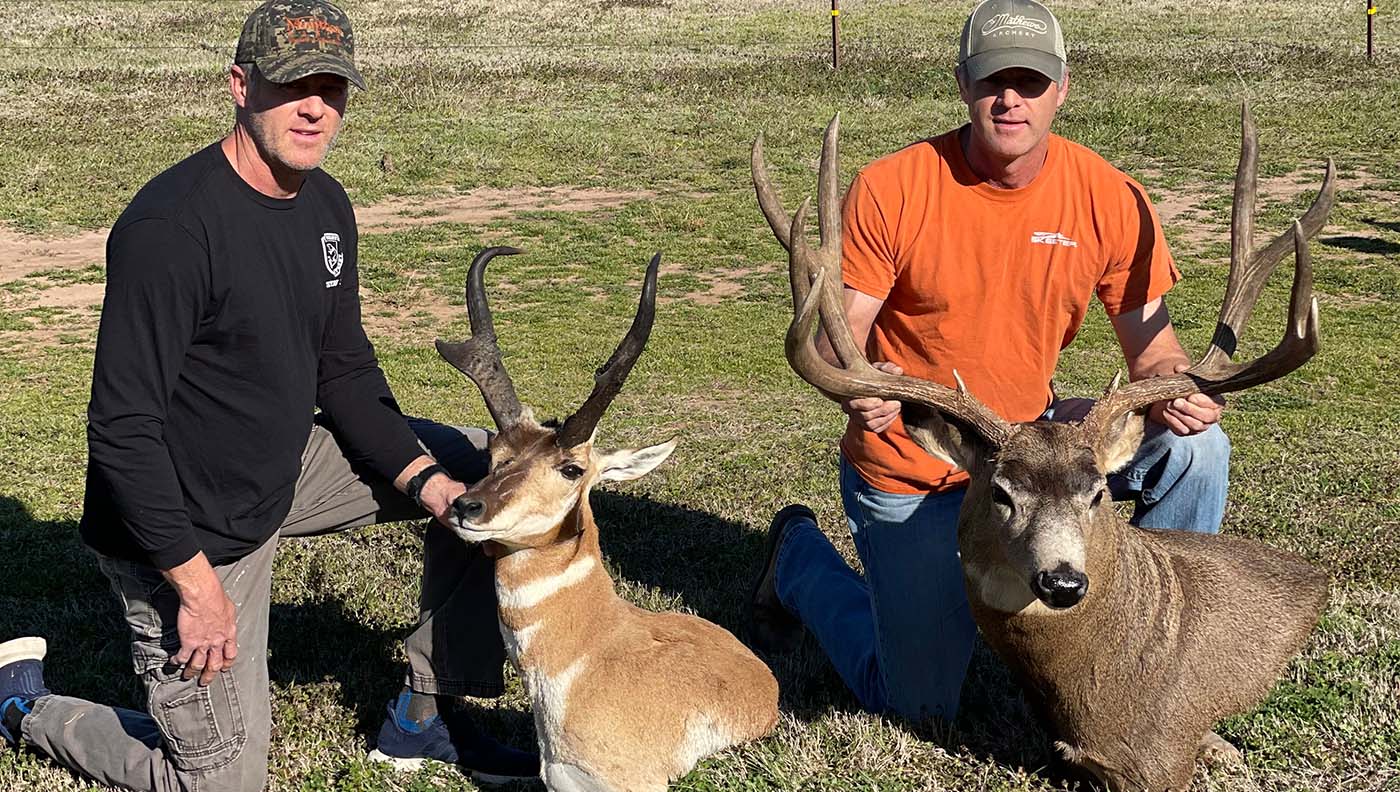 Twin bothers Clay (left) and Ray Smith pose with the mounts of their trophy animals. Ray and Clay Smith
SHARE

As identical twins, Ray and Clay Smith have racked up a bunch of shared experiences over the years, especially in the field. But the Texas hunters have done what very few brothers, and almost certainly no twins, have ever done before: each entered a trophy buck into the Boone & Crockett record book.

Ray was first up with a monster muley he killed in Colorado during the fall of 2018. He and brother Clay had booked an elk hunt with Rocky Mountain Outfitters, and just prior to the hunt, the outfitter called Ray to ask if he was interested in a landowner voucher for mule deer as well. “When he told me they were seeing 170- to 180-inch bucks in the area, I didn’t think twice,” Ray says.

The plan was to hunt for elk in the morning and then look for mule deer at midday. “We were hunting along the Arkansas River bottoms when guide Ben Adair spotted a buck that he said was the biggest he’d ever seen. We thought the deer might go 200 inches, so suddenly I wasn’t as interested in elk anymore.”

Ray and his guide tried to make a stalk on the buck, but after a game of cat and mouse, they never did get a shot. For the next four days, Ray, brother Clay, and Adair would check the river bottom at midday, but could not find the buck they’d named “The Gray Ghost.”

On the last day of the hunt, Clay and another guide focused on elk, while Ben and Adair made a final try for the giant muley. The pair was glassing the river bottom, searching for the buck, when Adair signaled to Ray that the buck was bedded right below him. Although in easy gun range, the buck was positioned so that all they could see were his antlers. Suddenly the buck got up and slipped into the river bottom without offering a shot. But then Adair spotted the animal moving through the trees, and the hunters made a move to cut the deer off. The plan worked, and Ray’s .300 Win Mag made short work of the buck on a 40-yard shot.

“When I walked up to the buck, I was immediately filled with a sense of awe,” Ray recalls. “The width, mass, and height of the antlers were unreal, and his body was just immense.” Ray’s towering 5X5 scored 209 inches B&C.

Early in the fall of 2019, Clay got his chance to join his twin brother in the B&C book. “In late August, our dad Kenneth, my son Hunter, and my brother Ray went to southeast New Mexico for an antelope hunt,” he says. “While the bucks in that area are bigger than average, even we were surprised by a buck we saw on our first evening of scouting. He was grazing out in a parched wheat field, and looked big even to the naked eye. When Ray got binoculars on it, he just said, ‘He’s a hoss!’”

On opening morning, the game plan was simple; Ray and Kenneth would sit in a ground blind near where they’d spotted a pair of good bucks. Clay and Hunter would hunt the wheat field where they’d seen “The Hoss” feeding. “By then I was already jokingly referring to him as ‘my buck’,” Clay says. “Hunter had insisted that I take this big buck if I had the chance, and it didn’t take a lot of persuasion for me to agree. But wondering if he’d be in the same area, or if we’d get a shot, sure kept me awake the night before the opener.”

But as light dawned on the wheat field, the big antelope was not far from where they’d left him. “I couldn’t believe my eyes,” Clay says. “He was only 100 yards from where we’d spotted him the evening before. I grabbed my Browning rifle as Hunter started pulling his video camera out to record the stalk and hopefully the kill.” Although there wasn’t much cover to hide their movements, Clay and Hunter managed to sneak to within 200 yards of the buck. The buck sensed something was up and finally turned to stare at the father-son team, but by then Clay had the crosshairs settled on the pronghorn, and with a squeeze of the trigger the buck dropped.

Clay knew the antelope was big when he shot, “but walking up on him I began to realize that I was looking at an exceptional pronghorn. The length of his horns, the size of his cutters, and the overall mass was something to see,” he says. After the required drying period, Clay had the buck officially measured, and it scored 83-4/8 B&C, well over the 82-inch minimum required to make the all-time book.

To top off Clay’s success, the entire Smith clan took great bucks on that New Mexico trip. “My brother got his buck only a couple hours after mine; my dad shot his first-ever antelope; and Hunter got his buck the very next day. We couldn’t have asked for a better three-day antelope hunt.”