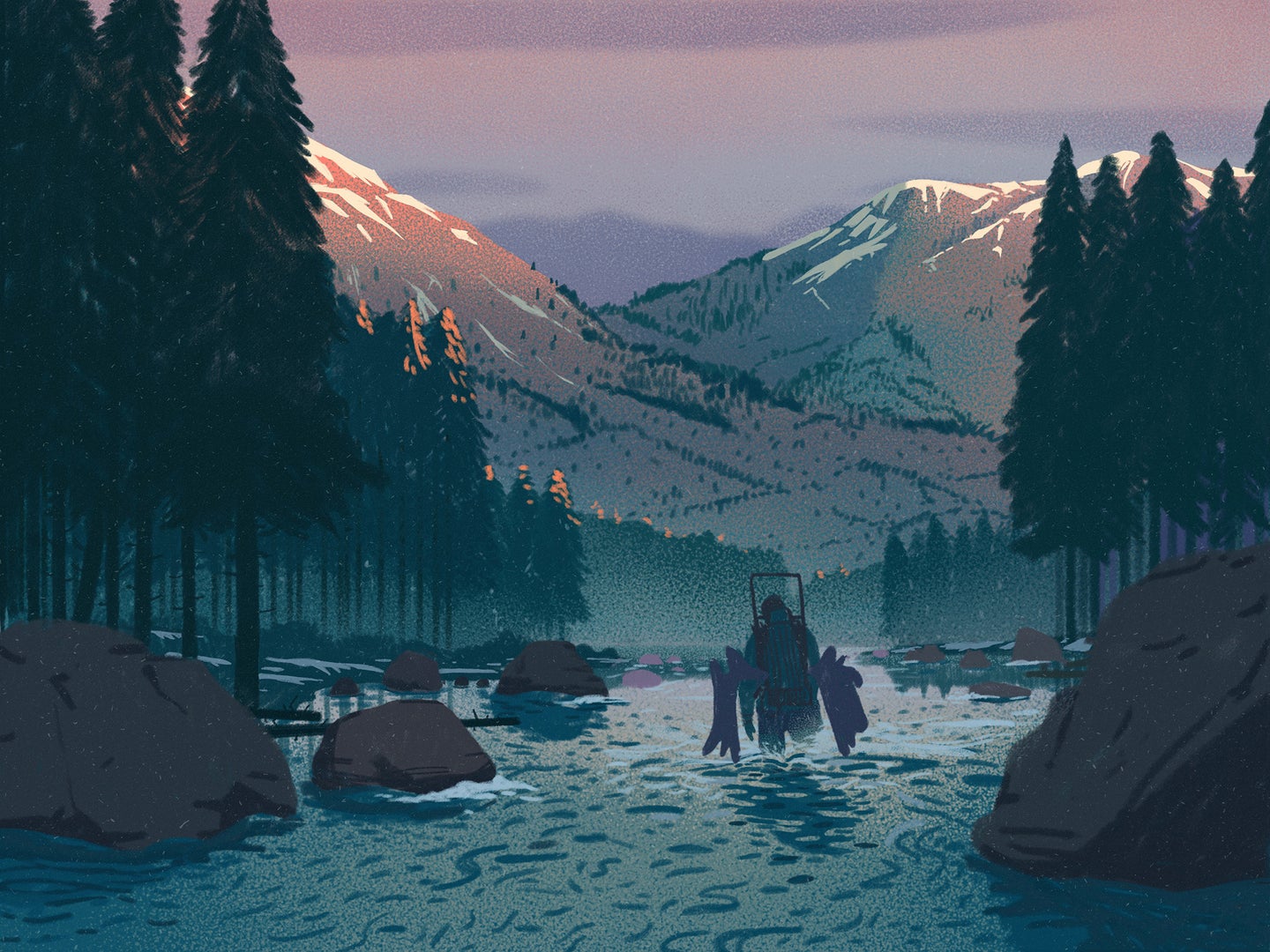 Why do we push ourselves to the breaking point in the outdoors—and then choose to do it again? Because it’s what we’ve always done

BACK IN THE YEARS when I had more mouths to feed and any elk was a good elk and where it died on the mountain was of no particular concern, I drew a tag to hunt moose in the Spanish Peaks Wilderness, in Montana. I did not much think about the hardships involved in such an endeavor. To me, a moose was just an elk by another color, and I had packed elk quarters from near and far and from riverbottoms to rimrock basins, suffering no consequences beyond losing a few pounds.

The destination for this hunt was a saddle on a ridge on the far side of the Gallatin River, where I was to meet up with my old friend Joe Gutkoski. Joe would hunt elk while I tried to pick up the trail of a moose.

There was nothing wrong with this plan, except that as far as moose hunting goes, I was two months too late. Moose are easy enough to find during the autumn rut, when they are down in the bottoms with their minds in the gutter. You climb high, and you look low. A moose in the willows is as conspicuous as a spider on a slice of Wonder bread. But by November—and this was well into the month—the moose are as high on the mountainsides as the elk and playing just as hard to get.

To compound my problem, it had snowed only a few days before, the fresh powder not erasing tracks entirely but deep enough to mask the identity of their makers. In country where there are 50 elk for every moose, I could waste a lot of time hunting the wrong animal, or, for that matter, the right animal going the wrong way. When I brought this up with Joe, who had a small fire going when I found his camp, he said to look for hair. That would be the giveaway—that and following the trail in both directions until I found a clear track pointing the way.

On this wisdom, we turned in for the night. The next day, climbing before dawn, I soon found myself put to the test. The tracks before me were just vague troughs in the snow. As I had suspected, I couldn’t tell which direction the animal was heading, let alone identify the species. I wouldn’t meet up with Joe again until nightfall, so I couldn’t expect any help from a second pair of eyes.

I could, however, follow my old friend’s advice. Making a guess, I turned north on the track and had gone perhaps half a mile through heavy timber when I came across a scattering of hairs where the animal had scraped against a log. The hairs were long and black, so one problem solved. It was a moose, but I still didn’t know which way he was going. Up ahead of me, the trail led into a copse of pines where the canopy was thick, making the snow cover thin. Here, on the scant white blanket, the impressions of the hooves were plain to see. I was on the trail all right, and, going very slowly, I caught sight of the moose ahead of me, only stripes of his hide showing between the tree trunks. It was a bull, what they call in Montana a paddle head—no trophy, but I was hunting meat. A few steps to my right would give a clearer view, and I do not think he heard the shot that killed him.

It was only when passing my hands over the beer-keg chest and immense forequarters that I realized that, while the hunt was over, the work might prove more daunting than I had bargained for. This wasn’t an elk that I could wrestle onto its back to field dress. I couldn’t lift the head of the moose more than an inch.

Because I couldn’t move the beast, I had to carve the meat from the bones on one side, then turn the moose over and work on the other side. This was the gutless method before I knew there was such a technique. Well, necessity, as they say… It was dark by the time I stumbled back into the camp, blood up to my elbows, where Joe was waiting for me with a pair of raised eyebrows.

At the kill site the next morning, Joe was rapturous. “Look at that nose, would you?” he said. “Look at the length of that bone. He’s a remnant of the Ice Age, that’s what he is.” He drew his knife.

By noon the remnant of the Ice Age consisted of ten plastic garbage bags of wet moose squatting in the snow, plus the rolled-up hide covered with branches and the head and antlers cached in the crotch of a tree. A pair of whisky jacks drew friends who drew friends. They strung the branches like crows in a Hitchcock movie.

Joe stuffed a bag of meat into his pack and swung it onto his shoulders, then hesitated.

He unshouldered his pack and stuffed in another bag. “There,” he said. “That’s more like it.”

I had to heft his pack onto his back while he sat on a log and then help him to his feet. Well, if Joe could carry a man’s load, then I had no choice—he was 30 years my senior and could not have weighed more than 130 pounds. And so, similarly overburdened, I stumbled down the side of the mountain.

When I think of reaching my limits of endurance, it is that day I recall. It was not far on the map, but all of it was up and down, stepping over downfall covered by a foot or more of snow in places, postholing where the crust was thick enough to support your weight, almost.

One or the other of us would take a fall every few hundred feet, and we would have to stoop to help each other back up. The muscles on the insides of my thighs began to quiver. I put my hands on my knees to catch my breath.

“This is moose hunting,” Joe said, his own breath labored. “It’s like getting old. It’s not for sissies.”

A mile or two farther along, we crossed an elk track. The track was fresh, the hoofprints leading down the basin on the worn game trail we’d been following. Joe turned on it. “Never leave elk to find elk,” he said. It was one of his maxims of hunting. He shrugged. “As long as he’s heading our way,” he added.

The elk was heading our way. Then he wasn’t. The tracks had turned uphill.

“Tell you what,” Joe said. “I’ll stay on him a while and meet you down at the ford.” I watched him turn onto the track, stooped under the weight of the pack.

You’re a better man than I am, I said to myself.

Two hours after we split up, I caught my first glimpse of the river, its broken pewter ribbon shining far below. We had hidden our waders on the near bank, and by the time Joe joined me there, I had already ferried across one load of venison.

“No elk.” He unshouldered his pack and took out the game bags.

“Aren’t you coming back to town?”

“No, I’ll stay out another couple nights.” He said there was a cave he’d siwashed out in before, not too far from where he’d left the elk track. Then he asked me to tell his wife that there’d been a change of plan. He turned, and I watched the gloom swallow him.

Now it was down to me, an angry-looking thread of current, and a man’s load of moose meat. “Just don’t fall,” I said under my breath. I almost didn’t. But only a few steps from the far bank, my felts slipped, and going down I felt the rush of ice water over my wader tops. It wasn’t deep, but burdened by the pack, I had to walk on hands and knees to the shore, then slog to the truck weighted down by the water in my waders. This will be a story someday, I told myself.

But not yet, for six sacks of venison remained on the mountainside.

Seven days into the echo of the shot, I hiked in for the last load. The blood and bones were covered with new snow and the birds had gone. I’d packed the head and hide out on earlier trips, and now there was nothing to show we had been there.

A quarter of a century has passed since I turned to hike down the basin with the last load. That is a long time, and I have had plenty of opportunity to reflect upon the hunt. I wish I could say I learned a lesson—never hunt moose again, for starters. But it’s the concept of a so-called man’s load, or, better put, testing the limits of physical and mental endurance, that continues to intrigue me.

I have always been compelled to test myself in the most difficult of outdoor pursuits—solo backpack hunting for elk, fly fishing for steelhead—without being able to articulate why. Part of it, I know, is simply circumstantial. I never had pockets deep enough to pay an outfitter to go on a horseback hunt in the backcountry or to hire a guide to tell me where to cast. And so it was easy to rationalize, telling myself that the greater the effort expended to hook the fish or pack out the venison, the greater the reward, at least in the spiritual sense that it draws us closer to our ancestors as we carry on their traditions.

These ties to primitive man were old Joe’s favorite musings. He suffered from a climbing injury that made lying on hard ground painful, and I would often awaken to see him sitting before the dying embers of his fire, wondering at our place beneath the silver pepper of the stars.

“What’s it all about, laddie?” he would say, staring ahead into the night. “Tell me when you know.” Joe is hunting heaven’s elk now, and I like to think that their trails have led him closer to the answers he sought.

As for me, I would go on to hunt one more moose, proof if it was needed that the body, given time, erases the memory of pain. Once more I would stress my heart and my legs to the limits of strength and endurance, and once more I would have ample reason to say never again.

But that is another story.