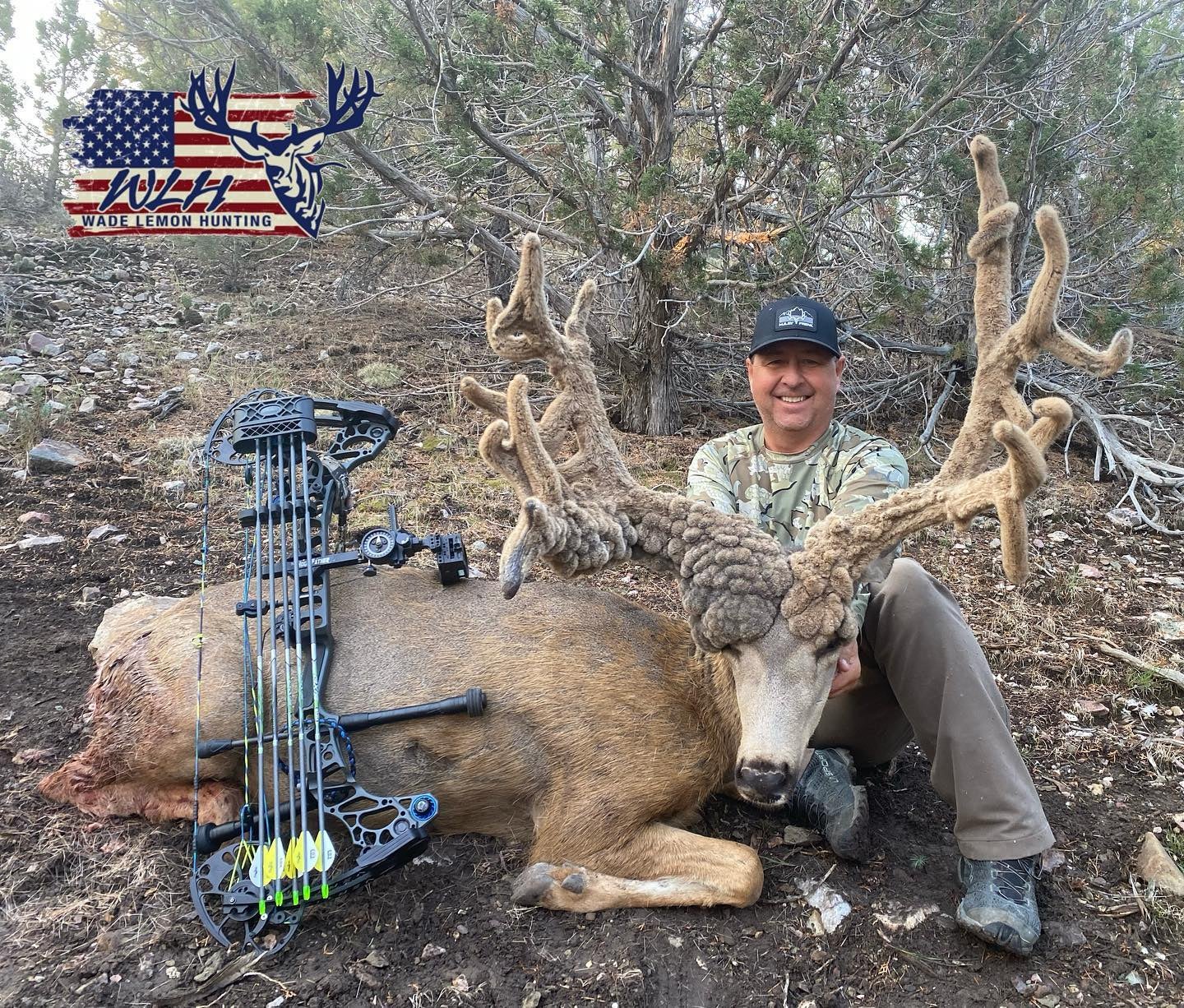 Bowhunter Brent Scott punched his Utah archery tag with an incredible opening-day mule deer on Saturday. The bases of the massive muley’s nontypical antlers resemble a lumpy rock formation covered in moss, or in this case, thick velvet.

Scott was hunting with Austin Clark, a guide with Wade Lemon Hunting in one of Utah’s limited-entry hunt areas.

Kalan Lemon explains that the deer is referred to as a “cactus buck” or a “stag buck.” These deer have gnarly, velvet-covered antlers with abnormal growth patterns. They typically retain their velvet due to variations in testosterone levels, and their multiple, misshapen points and excess “globs” of velvet give them the cactus-buck moniker.

Clark says that trail camera images showed that the buck did shed its antlers last year. “We have multiple years’ worth of trail-camera images and video of this deer,” he says. Gunner Steele, another Wade Lemon Hunting guide, first spotted the deer a few years ago and kept tabs on it through this year. Once they decided to make a play for the buck this year, Clark repeatedly monitored the deer during the summer, and he intensively scouted the buck the week prior to the season opener.

A Three-Hour Stalk Leads to a 40 Yard Shot

“It was a real team effort. That’s what resulted in a first-day kill,” Clark says. Scott and Clark put a patient, three-hour stalk, aided by fellow guide Dylan Peterson who was acting as a spotter. “We sat on that buck at 50 yards for over an hour while it bedded beneath a cedar,” says Clark. “All you could see were the tops of his antlers.”

The deer rose and moved away, heading toward a large patch of timber. Scott and Clark pursued, estimating the deer’s route and then hustling to get ahead and intercept it. They guessed correctly. The buck was 70 yards from them when it emerged from the woods. It began heading in the hunters’ direction, but then halted at 40 yards when Scott tried to stealthily adjust the sight on his bow.

“It was a real small movement, but enough to make the deer stop. He turned broadside and gave us enough time to shoot,” Clark says.

The buck ran off and bedded down. Uncertain of the hit with evening approaching, they decided to leave the deer overnight. Scott and Clark slipped out as darkness fell, returning at first light. The buck was there in the morning.

Clark estimates the deer is 5 years old, based on an assessment of its teeth, plus years of camera footage.

The deer unofficially green scores 250 inches, according to Clark. He says Scott plans on having an official score recorded after the required 60-day drying period. Velvet-scored entries are allowed in the Pope & Young record book for species taken with archery gear. The minimum score for entry in the book is 170 for a non-typical mule deer. The current world record is a 291-5/8-inch beast taken in 2018 by Dennis Bennett in Arm River, Saskatchewan.

The antler base on the buck’s right side is so pronounced that it looks a bit like the bosses on a cape buffalo. It projects so low, though, that it likely obscured the deer’s vision for its right eye. Clark said the deer canted its head as it walked, clearly favoring its left eye.

“This is truly a one-of-a-kind deer,” Clark says. “The right antler has more mass than most deer have on both antlers.”