The 5 Weirdest Deer Hunting Stories of 2022

From an almost completely bald buck to a gnarly cactus buck, these deer were totally strange 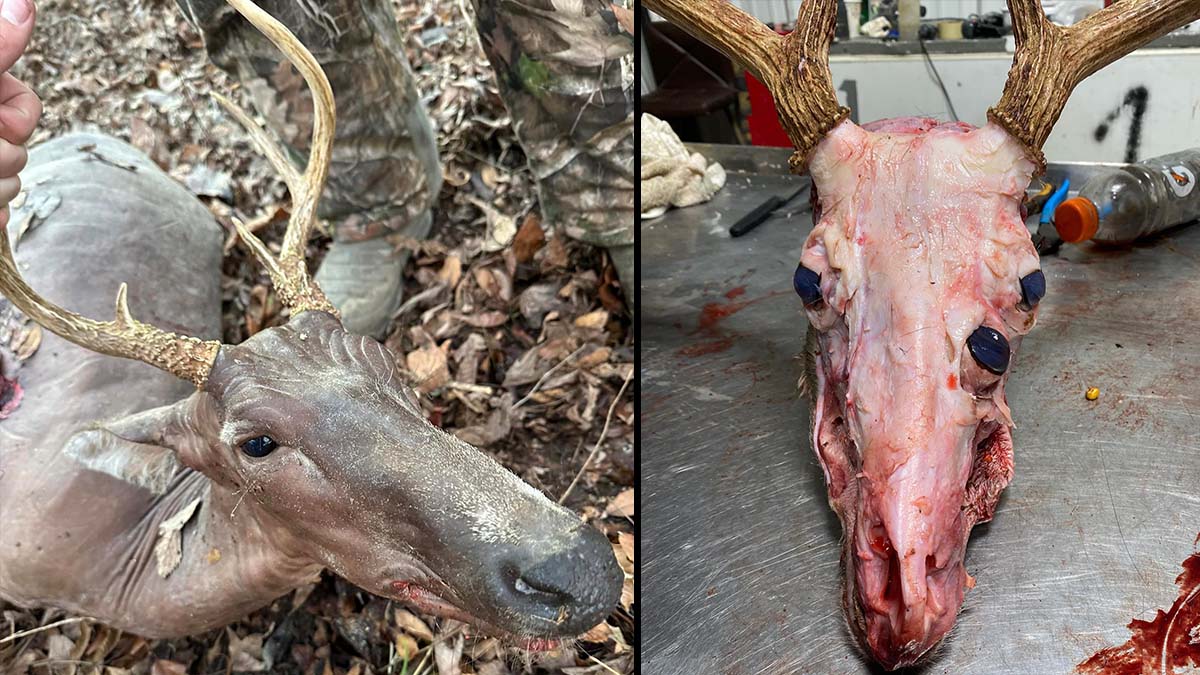 This deer is gnarly. Really gnarly. On December 1, Illinois hunter Jay Kehrer shot what he initially thought was a young melanistic buck. But when he went to recover the deer, he discovered it was something else altogether. The deer’s strange coloring resulted from it being entirely hairless, except for its scent glands, pubic area, and the tips of its ears. It’s not clear why the buck was in such an unusual condition, but a state biologist said it appeared to be healthy. Kehrer says he planned to eat it—just like any other deer he’s hunted.

2) The Strangest Hunting Buddy of All Time

It can be fun to share the deer woods with a companion—but I can guarantee that you’ve never had a hunting buddy quite like this one. This November, Wisconsin hunter Asher Torbeck encounter an emu that had escaped a nearby enclosure. The big flightless bird stayed in the area for several days, often right by Torbeck’s tree stand. Eventually, the emu even helped distract a small buck while Torbeck shot it. The next day, Torbeck went back and helped capture and return his unusual “hunting buddy” to its rightful home.

This fall, we saw several antlered does, heard stories about locked-up bucks, and fielded reader reports of cactus bucks and piebalds. But there was only one three-eyed deer. The rare Texas buck was harvested on November 9 and posted to Facebook by Jon Wilson of Double Nickel Taxidermy in New Braunfels, Texas. “Never have I ever seen a deer with three eyes!” he wrote. “What seemed to be an abscess at first was later revealed to be a fully formed eye under the skin…Nature sure is amazing!”

A Missouri hunter tagged one of the weirdest deer of the year during a morning hunt on October 29. What he thought was a nontypical as it approached, turned out to be a nice buck with the skull of a dead buck lodged in its antlers. Mike Lewis, 52, called it a “once-in-a-lifetime hunt” and estimates the combined score of the deer and its attached deadhead at approximately 120 to 125 inches B&C.

Related: What is a Cactus Buck and Why Do They Grow Such Funky Antlers?

5) A Cactus Buck for the Ages

Deer don’t get much weirder than the cactus buck killed on November 3 by Beau Pruitt, an eight-year-old hunter in Georgia. Pruitt and his father had been chasing the deer for years before the young hunter finally shot it while it was feeding in a patch of clover on his grandfather’s property. So-called “cactus bucks” suffer from a condition known as cryptorchids. They never shed their velvet and instead accumulate antler growth year after year for their entire lives.