Caleb Henry took the big boar while hunting with his buddy and their hounds in Haywood County. It's likely a record for the area 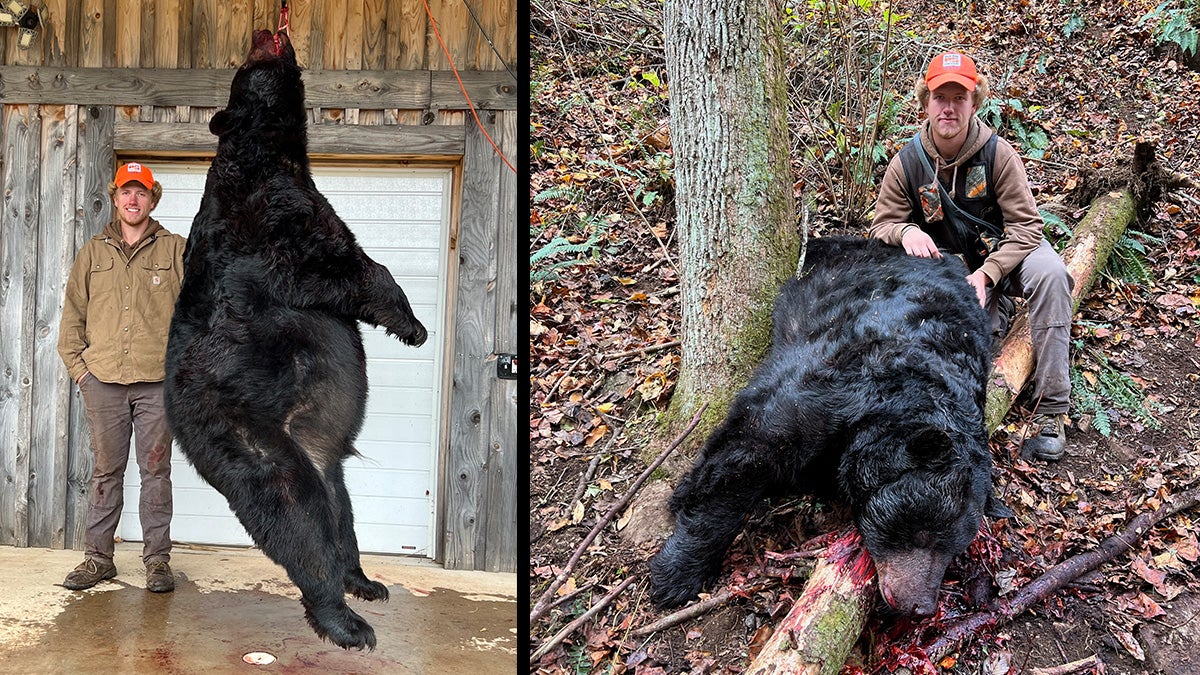 The next morning, the guys got back at it. “Lucas turned two dogs loose that morning, and I turned loose two,” Henry tells F&S. “They went down into this laurel thicket and split up. His two dogs got after a big one, and mine got after a smaller bear that was probably about 200 pounds.”

Henry and Teague focused on the big bear and followed Teague’s dogs. They let out more dogs to run the big bruin, while the other two dogs treed the smaller bear. Once the dogs treed the big bear, Henry shot it once with a lever-action .35 Remington and dropped it.

Getting such a massive critter out of the woods posed its own challenge. “Luckily, we weren’t too far from a trail that we could get our side-by-side down,” says Henry. “We used one of those big white ‘ton’ sacks. There were eight of us, and we all rolled him into that big sack, tied a rope to the sack, and tied a block and tackle to a tree. We dragged him with that side-by-side to the trail. Then we backed up against a high bank, and rolled him into the back of the side-by-side.”

Once they got the bear home, they found out how big it really was. Hanging on a meat scale, the boar weighed incredible 695 pounds—a new record for Western North Carolina. It beat the old record for the area, a 688-pound bruin that was taken in Madison County.

The hunt was the culmination of a lifetime of bear hunting. “I was probably eight or nine when I killed my first bear,” says Henry. “I’ve been hunting ‘em ever since. The biggest one I’d shot before this weighed 320 pounds.”

Henry is a houndsman and says he’s been raised by several generations of other avid houndsmen. He and his brother Cody train walkers and plotts, though his family has worked with blue ticks and redbones in the past. “My family and I don’t really like to sit in a stand to hunt bears,” he says. “To us, that’s not the way to do it. We’d rather do it with our dogs.”