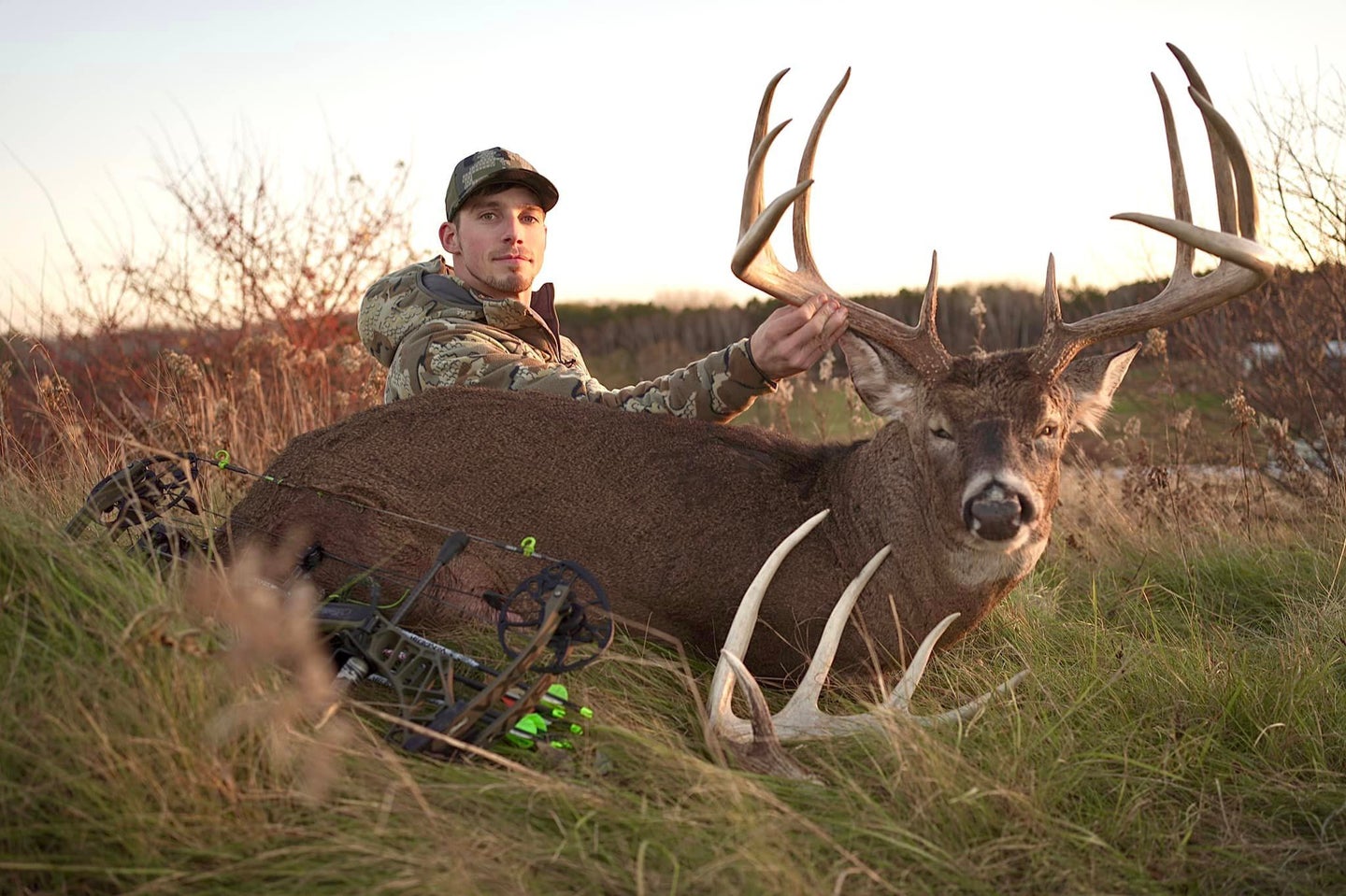 Pagel says the deer is a contender for the Eau Claire County record for a typical whitetail taken with a vertical bow. Walter Mueller
SHARE

On Saturday, November 5 at 4:30 in the afternoon, a Wisconsin bowhunter named Bobby Pagel arrowed a tall-tined bruiser of a buck he’d been chasing relentlessly since mid-October. A small business owner in Eau Claire County, the 31-year-old Pagel says he “left work in the dust and basically lived in the woods” in his quest to tag the once-in-a-lifetime whitetail. With help from his girlfriend, he homed in on cell-camera footage to pinpoint the buck’s 1,000-foot home radius, plotted its daily patterns on a calendar, and finally got his hands on its perfectly symmetrical 10-point rack after the deer came cruising in from about 200 yards away to investigate a group of does milling around by his tree stand.

“I first knew he existed when I found one of his sheds this spring,” Pagel tells F&S. “My Dad’s a hemp farmer up here [in Eu Claire County], and I found it in one of his hemp fields that also has a lot of clover growing in it. When I found that shed, I told myself: ‘I gotta do everything I can to get on this deer.’”

Pagel didn’t actually put eyes on the big ten until October 16. “He crossed the road right in front of me into our field when I was leaving the farm,” he says. “When I realized he was alive, and obviously hanging around in our area, I threw out a whole bunch of cell cameras and started getting a bead on him.”

The deer showed up on one of his cameras on October 17, then again on the 18th, and one more time the following day. “I hunted on the 20th, and he walked by me at 38 yards, but it was way too dark and after legal shooting hours,” he says. “All I could see through my binos was a giant white rack. I knew it was him.”

Not wanting to spook the old buck and ruin his chances of future run-ins, Pagel stayed in the stand well past dark before creeping out and heading home for the night. He continued to sit all day for the next four days, but the buck of his dreams was a no-show. Then, on October 24, around 8:40 p.m., the deer reappeared on one of Pagel’s cellular trail cams that he’d set up on the edge of a hayfield.

By that time, the rut was in full swing in northern Wisconsin, and Pagel continued to hunt every day with dogged persistence. “I knew that two or three of my neighbors had this deer on camera, and they were hunting him as well,” he says. “One of my neighbors actually saw him on Thursday, November 3 but wasn’t able to get a shot off. Two days later, he came by me again.”

The morning of November 5 brought an 18-degree temperature drop and a day’s worth of steady rainfall. Knowing that the dramatic cool front would get the deer up and moving during daylight hours, Pagel hunkered down in the stand for another all-day sit with an umbrella screwed into the tree just above his head.

A few hours before dark, the deer was back and making its way into bow range. “I had steady movement all day and had a beautiful 8-pointer with split G2s come in, but I had to pass because I knew that this monster was still out there,” Pagel says. “Around 4:30 in the afternoon, I looked up, and there he came from about 200 yards out—cruising by himself. I had a couple of smaller bucks and a pile of does behind me, and I think he was coming in to investigate them.”

The buck crossed in front of Pagel at 30 yards. “When I shot, I went to grunt and stop him,” he says. “He actually took another step, and I hit him back in his femoral artery. The biggest part of the femoral artery sits in a deer’s hind quarter, and it moves a massive amount of blood through the circulatory system. While it wasn’t the type of hit Pagel was hoping for that day, it’s an incredibly lethal wound, particularly when administered by broadhead.

“I was pretty certain I heard him pile up about 70 or 80 yards behind me in the thick stuff,” he says. “I let him sit for an hour or so. I didn’t want to push a buck of this caliber.”

When he finally got his hands on the buck’s rack, Pagel was overcome by a flood of emotion. “I immediately called my Dad,” he says. “He could barely understand what I was saying because I was crying so much and so darn happy. Somehow I managed to tell him that I got the buck.”

Pagel unofficially scored the deer at 192 inches B&C. He says that his taxidermist believes the monster could become the next Eau Claire County record for a mainframe-typical taken with a vertical bow. “I’m just so thankful to the guys I work with for letting me live in the woods for the last month and to my girlfriend Ashley for all of her help,” he says. “I’ve always dreamed of shooting a world-class whitetail like this.”