Stephanie Manteufel has taken a lot of great deer, but this old, 180-class bruiser is her biggest ever 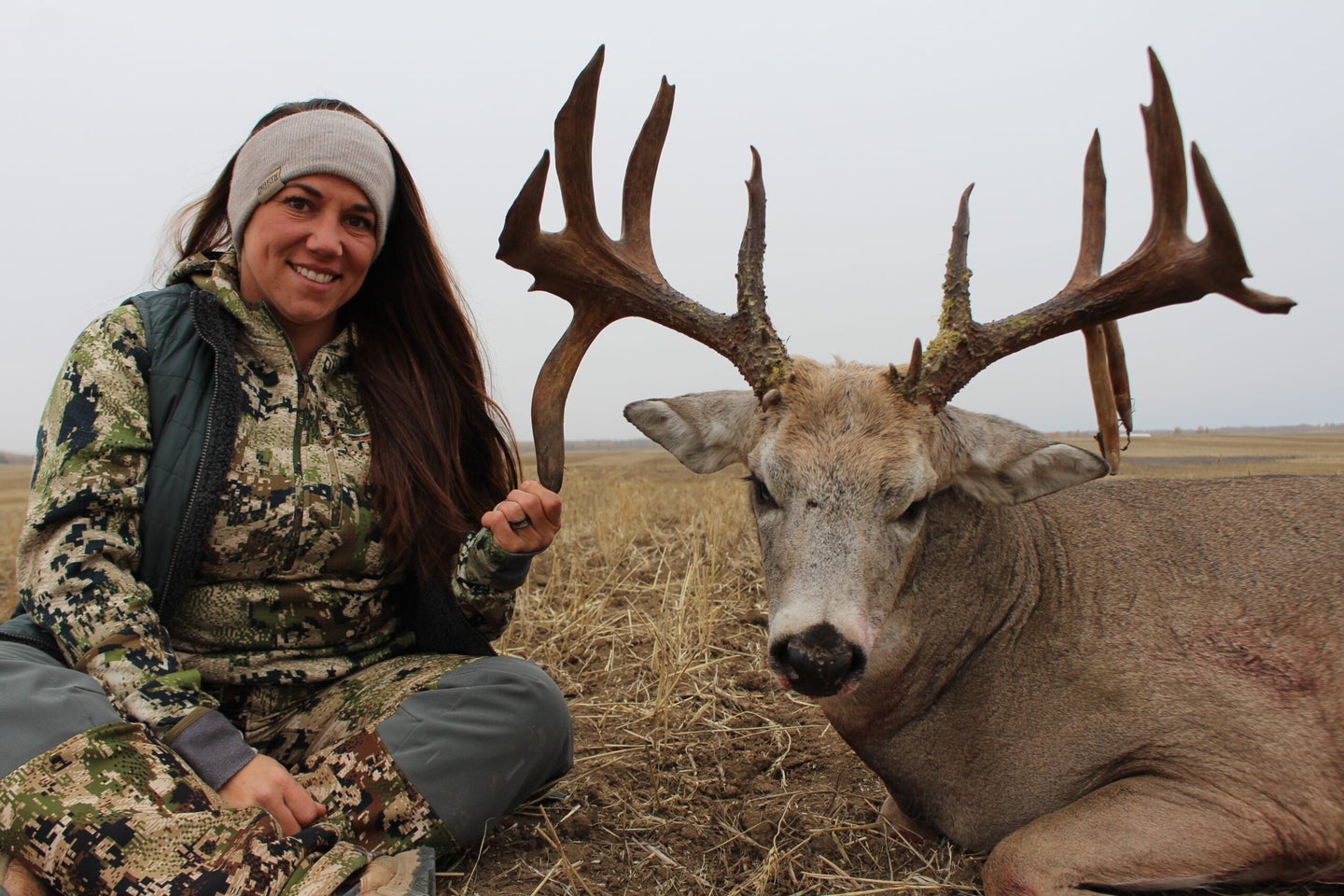 Stephanie (Brown) Manteufel has a long outdoor history. She’s hunted whitetails for the past decade, but she enjoys all forms of hunting. So much in fact that she and her husband Trevor own and operate Top of the Flyway Outfitters, which is in northern Alberta, Canada. It’s a fully guided black bear, mule deer, whitetail, and waterfowl operation.

“Hunting is our life,” says Manteufel. “Our lifestyle is completely nomadic and based around hunting 365 days a year.”

After passing up several opportunities on other bucks earlier in the season, Mateufel hung some trail cameras in a new location, and in just a few go photos of the quadruple droptine buck. As soon as it showed up, she knew they had to target the buck and continued passing other shooters in hopes of seeing it.

“I was pretty set that I wanted to go after this guy, specifically” says Manteufel. “It wasn’t until about a week later that I finally caught up to him. While I had been dedicated to bowhunting for the past 40 days, we now had the opportunity to use rifles. My husband, Trevor, told me I needed to put my bow pride away and pick up the rifle to kill this deer, if it gave me the opportunity.”

On October 4, everything aligned. She set up shop overlooking a field. Overcast skies blanketed the landscape in soft lighting. The wind howled and whipped. The first snow of the year was forecasted for the following morning.

Later that afternoon, she finally got her shot. “I will never forget it,” she says. “It was a few minutes before sunset, and the deer started to put on a show. Two young bucks came into the field. I was watching them and slowly scanning the area. At once, both bucks turned their heads downwind and locked eyes on something. It was the drop-tine buck.”

Standing 100 yards away, the buck turned and stopped, giving Manteufel a good shot opportunity. She put the crosshairs on the buck, settled in, exhaled, and pulled the trigger. The gun blast echoed throughout the area.

“I stood there in shock still looking through the scope,” she says. “It happened so fast, and he went down hard. Trevor grabbed me up and we hugged. I probably screeched a little. When we walked up on him, we were both in disbelief. He had this palmation that was not obvious in any pictures. They are so deceiving at times.”

They were guessing the buck had a mainframe 140-inch rack. Instead, it was a mainframe 153-inch deer with more than 30 inches of extra, non-typical points. Regardless, after 42 days of hard hunting, she was glad to put her tag on it.

“We are unsure of the exact age of this buck but determined he was on the decline,” Stephanie said. “His peak most likely occurred in the previous two seasons. We saved his jaw to see if we can have someone properly age him. He had almost no teeth at all. His gum line was very exposed. He was one of the largest-bodied, battle-wounded bucks I have seen.

“This deer means everything to me,” she continues. “It is validation for all the hard work we put into hunting, especially whitetail deer. We are so passionate about hunting whitetails and none of this would be possible alone. My husband is the best hunting partner I could ask for. I always say teamwork makes the dream work. Killing giant whitetails takes a lot of time and effort and when you work cohesively together, it truly is a win for both of us, even though only one person gets to take the shot.”

And they’ll both admire that quadruple droptine rack up on the wall.