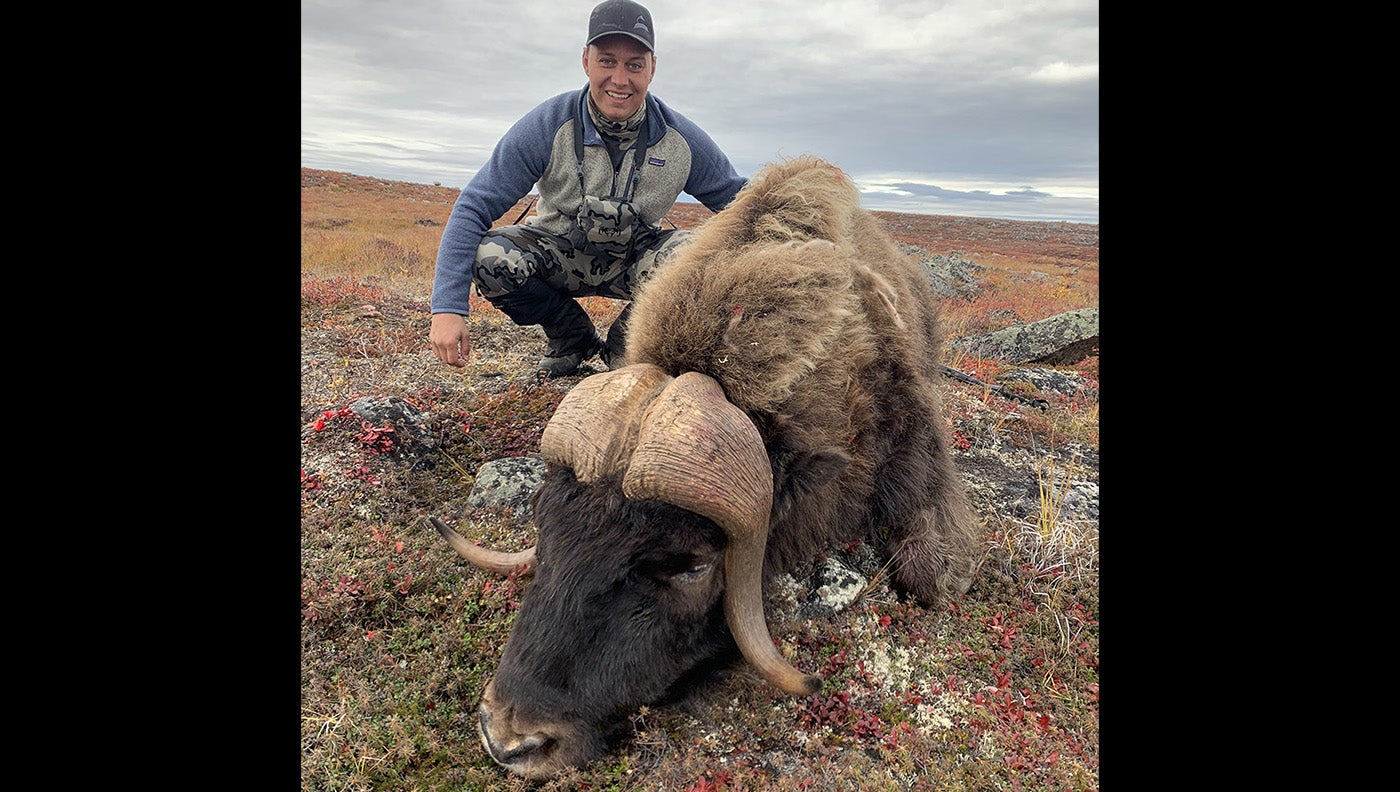 Bush pilot Alex Therrien, 27, a Nova Scotia native operating out of Yellowknife in the Northwest Territories, filled his muskox tag in September 2020 with an animal that is expected to be certified as the new world record. The hunter did not have the bull measured until last summer, and now we have the full details of his hunt, thanks to an account published in December by the Boone and Crockett Club.

Therrien took the incredible beast while flying a security check on a closed Northwest Territories lodge. Along with flying flying food and provisions to isolated communities, Therrien usually stays busy carrying hunters and fishermen to various lodges, but covid restrictions had barred foreign sportsmen from entering Canada in 2020.

The owner of Aylmer Lake Lodge had asked Therrien to check on his place, as wandering grizzlies sometimes damage property, especially when operations are closed. According to B&C story, Therrien and two buddies, Trevor Murdoch and Caleb Kirby, took two planes to the lodge. Therrien had drawn one of four resident muskox tags available in the area. After spotting some muskox from the air, they touched down and planned a hunt. The next day, Therrien climbed a hill and saw a herd of 50 to 60 animals about 3 miles away. The men left camp and set up for a lengthy stalk while keeping the wind direction in mind. It took them five hours to reach the herd. Therrien tells B&C that he wasn’t trophy hunting, but was definitely hoping for a bull, even though he had an either-sex tag. One large bull on the outskirts, which appeared to be the herd bull, caught their attention. Once Therrien had a clear shot, he fired at it three times with his .30-06 rifle. All of the 180-grain rounds found their mark, and two of them were lung shots.

Therrien says he estimated the animal weighed 181 kilograms, which is about 400 pounds. “I ended up shooting a bull that I didn’t really think was going to be that big, but it ended up being quite large,” Therrien told the CBC News. “The closer I got to it, the more I realized how big it was. And when it actually got measured, it ended up being the next potential record. That felt surreal.”

Packing the Big Animal Out Was No Small Feat

It took Therrien and his buddies six hours to quarter the animal. Over the next two days, the men each packed out an estimated 100 to 120 pounds of meat, as well as the hide and head. Therrien, an experienced Dall’s sheep hunter, carried the hide and head, which together weighed 175 pounds, out on a pack frame. “I go to the gym, but it was pretty brutal,” he told B&C. “But at least the elevation wasn’t bad. This was only 1,500 feet.”

The group’s next challenge was flying the now huge load of muskox back to Yellowknife, which is the capital city of Canada’s Northwest Territories. The strip of beach at Aylmer Lake Lodge where they’d landed the planes was too short for the loaded planes to takeoff. They found a suitable esker—a natural glacier runoff or gravel bar—10 miles away and began packing the meat to the new location.

While Therrien was making one of the final trips to the esker, he saw his buddy circling his plane 350 yards ahead of him and then pointing the nose down and buzzing the ground. A grizzly was on its way—potentially a bad situation for a guy carrying meat and covered in blood. Fortunately, the bear fled.

For their efforts, each man took home about 65 pounds of muskox meat. Therrien, though, also went home with a nice muskox rug and a pending world record. His bull scored 130-4/8 points, just topping the previous record of 129. Therrien’s provisional measurements are expected to be confirmed at the 31st Big Game Awards in Springfield, Missouri, this July.